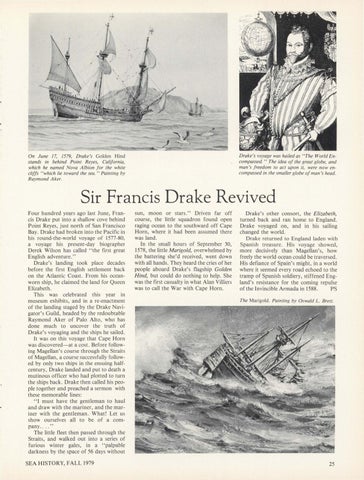 Drake&#39;s voyage was hailed as &quot;The World Encompassed.&quot; The idea of the great globe, and man&#39;s freedom to act upon it, were now encompassed in the smaller globe of man&#39;s head.

On June 17, 1579, Drake&#39;s Golden Hind stands in behind Point Reyes, California, which he named Nova Albion for the white cliffs &quot;which lie toward the sea. &quot; Painting by Raymond Aker.

Sir Francis Drake Revived Four hundred years ago last June, Francis Drake put into a shallow cove behind Point Reyes, just north of San Francisco Bay. Drake had broken into the Pacific in his round-the-world voyage of 1577-80, a voyage his present-day biographer Derek Wilson has called &quot;the first great English adventure.&quot; Drake&#39;s landing took place decades before the first English settlement back on the Atlantic Coast. From his oceanworn ship, he claimed the land for Queen Elizabeth. This was celebrated this year in museum exhibits, and in a re-enactment of the landing staged by the Drake Navigator&#39;s Guild, headed by the redoubtable Raymond Aker of Palo Alto, who has done much to uncover the truth of Drake&#39;s voyaging and the ships he sailed. It was on this voyage that Cape Horn was discovered-at a cost. Before following Magellan&#39; s course through the Straits of Magellan, a course successfully followed by only two ships in the ensuing halfcentury, Drake landed and put to death a mutinous officer who had plotted to turn the ships back . Drake then called his people together and preached a sermon with these memorable lines: &quot;I must have the gentleman to haul and draw with the mariner, and the mariner with the gentleman. What! Let us show ourselves all to be of a company .... &quot; The little fleet then passed through the Straits, and walked out into a series of furious winter gales, in a &quot;palpable darkness by the space of 56 days without SEA HISTORY, FALL 1979

sun, moon or stars.&quot; Driven far off course, the little squadron found open raging ocean to the southward off Cape Horn, where it had been assumed there was land. In the small hours of September 30, 1578, the little Marigold, overwhelmed by the battering she&#39;d received, went down with all hands. They heard the cries of her people aboard Drake&#39;s flagship Golden Hind, but could do nothing to help. She was the first casualty in what Alan Villiers was to call the War with Cape Horn.

Drake&#39; s other consort, the Elizabeth, turned back and ran home to England. Drake voyaged on, and in his sailing changed the world. Drake returned to England laden with Spanish treasure. His voyage showed, more decisively than Magellan&#39; s, how freely the world ocean could be traversed. His defiance of Spain&#39;s might, in a world where it seemed every road echoed to the tramp of Spanish soldiery, stiffened England&#39;s resistance for the coming repulse of the Invincible Armada in 1588. PS The Marigold . Painting by Oswald L. Brett.