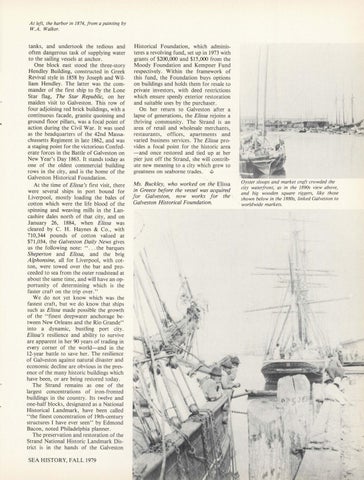 tanks, and undertook the tedious and often dangerous task of supplying water to the sailing vessels at anchor. One block east stood the three-story Hendley Building, constructed in Greek Revival style in 1858 by Joseph and William Hendley. The latter was the commander of the first ship to fly the Lone Star flag, The Star Republic, on her maiden visit to Galveston. This row of four adjoining red brick buildings, with a continuous facade, granite quoining and ground floor pillars, was a focal point of action during the Civil War. It was used as the headquarters of the 42nd Massachussetts Regiment in late 1862, and was a staging point for the victorious Confederate forces in the Battle of Galveston on New Year&#39;s Day 1863. It stands today as one of the oldest commercial building rows in the city, and is the home of the Galveston Historical Foundation . At the time of Elissa &#39;s first visit, there were several ships in port bound for Liverpool, mostly loading the bales of cotton which were the life blood of the spinning and weaving mills in the Lancashire dales north of that city, and on January 26, 1884, when Elissa was cleared by C. H. Haynes &amp; Co., with 710,344 pounds of cotton valued at $71,034, the Galveston Daily News gives us the following note: &quot; . . . the barques Sheperton and Elissa, and the brig Alphonsine, all for Liverpool, with cotton, were towed over the bar and proceeded to sea from the outer roadstead at about the same time, and will have an opportunity of determining which is the faster craU on the trip over.&quot; We do not yet know which was the fastest craft, but we do know that ships such as Elissa made possible the growth of the &quot;finest deepwater anchorage between New Orleans and the Rio Grande&quot; into a dynamic, bustling port city. Elissa&#39;s resilience and ability to survive are apparent in her 90 years of trading in every corner of the world-and in the 12-year battle to save her. The resilience of Galveston against natural disaster and economic decline are obvious in the presence of the many historic buildings which have been, or are being restored today. The Strand remains as one of the largest concentrations of iron-fronted buildings in the country. Its twelve and one-half blocks, designated as a National Historical Landmark, have been called &quot;the finest concentration of 19th-century structures I have ever seen&quot; by Edmond Bacon, noted Philadelphia planner. The preservation and restoration of the Strand National Historic Landmark District is in the hands of the Galveston SEA HISTORY, FALL 1979

Historical Foundation, which administeres a revolving fund, set up in 1973 with grants of $200,000 and $15,000 from the Moody Foundation and Kempner Fund respectively. Within the framework of this fund, the Foundation buys options on buildings and holds them for resale to private investors, with deed restrictions which ensure speedy exterior restoration and suitable uses by the purchaser. On her return to Galveston after a lapse of generations, the Elissa rejoins a thriving community. The Strand is an area of retail and wholesale merchants, restaurants, offices , apartments and varied business services. The Elissa provides a focal point for the historic area -and once restored and tied up at her pier just off the Strand, she will contribute new meaning to a city which grew to greatness on seaborne trades. .t

Ms. Buckley, who worked on the Elissa in Greece before the vessel was acquired for Galveston, now works for the Galveston Historical Foundation.

Oyster sloops and market craft crowded the city waterfront, as in the 1890s view above, and big wooden square riggers, like those shown below in the 1880s, linked Galveston to worldwide markets.