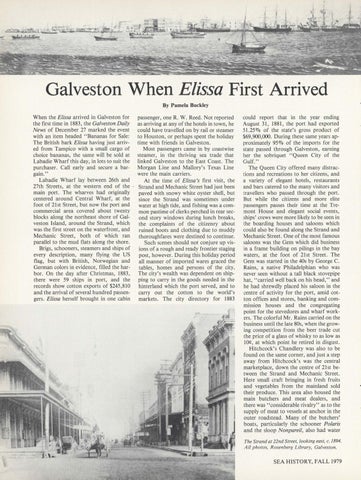 When the Elissa arrived in Galveston for the first time in 1883, the Galveston Daily News of December 27 marked the event with an item headed &quot;Bananas for Sale: The British bark Elissa having just arrived from Tampico with a small cargo of choice bananas, the same will be sold at Labadie Wharf this day, in lots to suit the purchaser. Call early and secure a bargain.&quot; Labadie Wharf lay between 26th and 27th Streets, at the western end of the main port. The wharves had originally centered around Central Wharf, at the foot of 21st Street, but now the port and commercial area covered about twenty blocks along the northeast shore of Galveston Island, around the Strand, which was the first street on the waterfront, and Mechanic Street, both of which ran parallel to the mud flats along the shore. Brigs, schooners, steamers and ships of every description, many flying the US flag, but with British, Norwegian and German colors in evidence, filled the harbor. On the day after Christmas, 1883, there were 59 ships in port, and the records show cotton exports of $245,810 and the arrival of several hundred passengers. Elissa herself brought in one cabin

passenger, one R. W. Reed. Not reported as arriving at any of the hotels in town, he could have travelled on by rail or steamer to Houston, or perhaps spent the holiday time with friends in Galveston. Most passengers came in by coastwise steamer, in the thriving sea trade that linked Galveston to the East Coast. The Morgan Line and Mallory&#39;s Texas Line were the main carriers. At the time of Elissa&#39;s first visit, the Strand and Mechanic Street had just been paved with snowy white oyster shell, but since the Strand was sometimes under water at high tide, and fishing was a common pastime of clerks perched in rear second story windows during lunch breaks, the complaints of the citizenry about ruined boots and clothing due to muddy thoroughfares were destined to continue. Such scenes should not conjure up visions of a rough and ready frontier staging post, however. During this holiday period all manner of imported wares graced the tables, homes and persons of the city. The city&#39;s wealth was dependent on shipping to carry in the goods needed in the hinterland which the port served, and to carry out the cotton to the world&#39;s markets. The city directory for 1883

could report that in the year ending August 31, 1881, the port had exported 51.25% of the state&#39;s gross product of $69,900,000. During these same years approximately 95% of the imports for the state passed through Galveston, earning her the sobriquet &quot;Queen City of the Gulf.&#39;&#39; The Queen City offered many distractions and recreations to her citizens, and a variety of elegant hotels, restaurants and bars catered to the many visitors and travellers who passed through the port. But while the citizens and more elite passengers passes their time at the Tremont House and elegant social events, ships&#39; crews were more likely to be seen in the boarding houses and saloons which could also be found along the Strand and Mechanic Street. One of the most famous saloons was the Gem which did business in a frame building on pilings in the bay waters, at the foot of 21st Street. The Gem was started in the 40s by George C. Rains, a native Philadelphian who was never seen without a tall black stovepipe hat, &quot;carried well back on his head,&quot; and he had shrewdly placed his saloon in the centre of activity for the port, amid cotton offices and stores, banking and commission houses and the congregating point for the stevedores and wharf workers. The colorful Mr. Rains carried on the business until the late 80s, when the growing competition from the beer trade cut the price of a glass of whisky to as low as 104:, at which point he retired in disgust. Hitchcock&#39;s Chandlery was also to be found on the same corner, and just a step away from Hitchcock&#39;s was the central marketplace, down the centre of 21st between the Strand and Mechanic Street. Here small craft bringing in fresh fruits and vegetables from the mainland sold their produce. This area also housed the main butchers and meat dealers, and there was &quot;considerable rivalry&quot; as to the supply of meat to vessels at anchor in the outer roadstead. Many of the butchers&#39; boats, particularly the schooner Polaris and the sloop Nonpareil, also had water The Strand at 22nd Street, looking east, c. 1894. All photos, Rosenberg Library, Galveston.