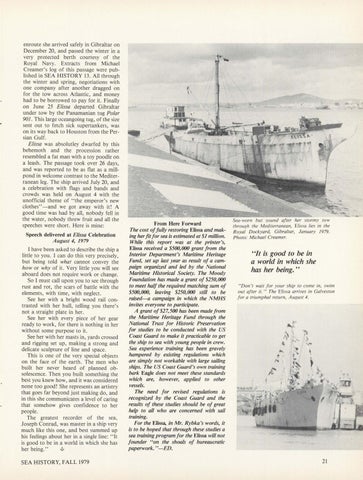 enroute she arrived safely in Gibraltar on December 20, and passed the winter in a very protected berth courtesy of the Royal Navy. Extracts from Michael Creamer&#39;s log of this passage were published in SEA HISTORY 13. All through the winter and spring, negotiations with one company after another dragged on for the tow across Atlantic, and money had to be borrowed to pay for it. Finally on June 25 Elissa departed Gibraltar under tow by the· Panamanian tug Polar 901. This large oceangoing tug, of the size sent out to fetch sick supertankers, was on its way back to Houston from the Persian Gulf. Elissa was absolutley dwarfed by this behemoth and the procession rather resembled a fat man with a toy poodle on a leash. The passage took over 26 days, and was reported to be as flat as a millpond in welcome contrast to the Mediterranean leg. The ship arrived July 20, and a celebration with flags and bands and crowds was held on August 4 with the unofficial theme of &quot;the emperor&#39;s new clothes&quot;-and we got away with it! A good time was had by all, nobody fell in the water, nobody threw fruit and all the speeches were short. Here is mine: Speech delivered at Elissa Celebration August 4, 1979 I have been asked to describe the ship a little to you. I can do this very precisely, but being told what cannot convey the how or why of it. Very little you will see aboard does not require work or change. So I must call upon you to see through rust and rot, the scars of battle with the elements, with time, with neglect. See her with a bright wood rail contrasted with her hull, telling you there&#39;s not a straight plate in her. See her with every piece of her gear ready to work, for there is nothing in her without some purpose to it. See her with her masts in, yards crossed and rigging set up, making a strong and delicate sculpture of line and space. This is one of the very special objects on the face of the earth . The men who built her never heard of planned obsolescence. Then you built something the best you knew how, and it was considered none too good! She represents an artistry that goes far beyond just making do, and in this she communicates a level of caring that somehow gives confidence to her people. The greatest recorder of the sea, Joseph Conrad, was master in a ship very much like this one, and best summed up his feelings about her in a single line: &quot;It is good to be in a world in which she has her being.&quot; w SEA HISTORY, FALL 1979

From Here Forward The cost of fully restoring Elissa and making her fit/or sea is estimated at $1 million. While this report was at the printer&#39;s, Elissa received a $500, 000 grant from the Interior Department&#39;s Maritime Heritage Fund, set up last year as result of a campaign organized and led by the National Maritime Historical Society. The Moody Foundation has made a grant of $250,000 to meet half the required matching sum of $500, 000, leaving $250, 000 still to be raised-a campaign in which the NMHS invites everyone to participate. A grant of $27, 500 has been made from the Maritime Heritage Fund through the National Trust for Historic Preservation for studies to be conducted with the US Coast Guard to make it practicable to get the ship to sea with young people in crew. Sea experience training has been gravely hampered by existing regulations which are simply not workable with large sailing ships. The US Coast Guard&#39;s own training bark Eagle does not meet these standards which are, however, applied to other vessels. The need for revised regulations is recognized by the Coast Guard and the results of these studies should be of great help to all who are concerned with sail training. For the Elissa, in Mr. Rybka &#39;s words, it is to be hoped that through these studies a sea training program/or the Elissa will not founder &quot;on the shoals of bureaucratic paperwork. &quot;-ED.

Sea-worn but sound after her stormy tow through the Mediterranean, Elissa lies in the Royal Dockyard, Gibraltar, January 1979. Photo: Michael Creamer.

&quot;It is good to be in a world in which she has her being. &quot; &quot;Don&#39;t wait for your ship to come in, swim out after it. &quot; The Elissa arrives in Galveston for a triumphal return, August 4.