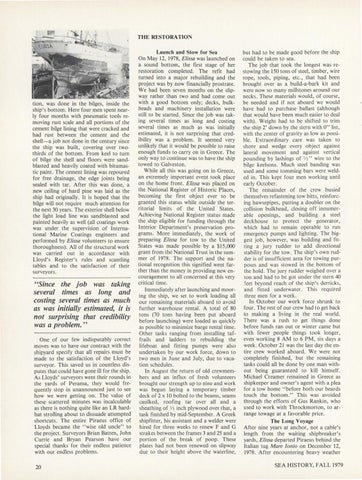 tion, was done in the bilges, inside the ship&#39;s bottom. Here four men spent nearly four months with pneumatic tools removing rust scale and all portions of the cement bilge lining that were cracked and had rust between the cement and the shell-a job not done in the century since the ship was built, covering over twothirds of the bottom. From keel to turn of bilge the shell and floors were sandblasted and heavily coated with bitumastic paint. The cement lining was repoured for free drainage, the edge joints being sealed with tar. After this was done, a new ceiling of hard pine was laid as the ship had originally. It is hoped that the bilge will not require much attention for the next 30 years. The exterior shell below the light load line was sandblasted and painted heavily as well (all coatings work was under the supervision of International Marine Coatings engineers and performed by Elissa volunteers to ensure thoroughness) . All of the structural work was carried out in accordance with Lloyd&#39;s Register&#39;s rules and scantling tables and to the satisfaction of their surveyors .

&quot;Since the job was taking several times as long and costing several times as much as was initially estimated, it is not surprising that credibility was a problem. &#39;&#39; One of our few indisputably correct moves was to have our contract with the shipyard specify that all repairs must be made to the satisfaction of the Lloyd&#39;s surveyor. This saved us in countless disputes that could have gone ill for the ship. As Lloyds&#39; surveyors went their rounds in the yards of Perama, they would frequently stop in unannounced just to see how we were getting on. The value of these scattered minutes was incalculable as there is nothing quite like an LR hardhat strolling about to dissuade attempted shortcuts. The entire Piraeus office of Lloyds became the &quot;wise old uncle&quot; to the project. Surveyors Brian Batten, John Currie and Bryan Pearson have our special thanks for their endless patience with our endless problems.

Launch and Stow for Sea On May 12, 1978, Elissa was launched on a sound bottom, the first stage of her restoration completed. The refit had turned into a major rebuilding and the project was by now financially prostrate. We had been seven months on the slipway rather than two and had come out with a good bottom only; decks, bulkheads and machinery installation were still to be started. Since the job was taking several times as long and costing several times as much as was initially estimated, it is not surprising that credibility was a problem . It seemed very unlikely that it would be possible to raise enough funds to carry on in Greece. The only way to continue was to have the ship towed to Galveston. While all this was going on in Greece, an extremely important event took place on the home front. Elissa was placed on the National Register of Historic Places, becoming the first object ever to be granted this status while outside the territorial limits of the United States. Achieving National Register status made the ship eligible for funding through the Interior Department&#39;s preservation programs. More immediately, the work of preparing Elissa for tow to the United States was made possible by a $15,000 grant from the National Trust in the summer of 1978. The support and the national recognition this signified went farther than the money in providing new encouragement to all concerned at this very critical time. Immediately after launching and mooring the ship, we set to work loading all our remaining materials aboard to avoid further warehouse rental. A total of 80 tons (70 tons having been put aboard before launching) were loaded as quickly as possible to minimize barge rental time. Other tasks ranging from installing taffrails and ladders to rebuilding the lifeboat and fitting pumps were also undertaken by our work force, down to two men in June and July, due to vacation schedules . In August the return of old crewmembers and an influx of fresh volunteers brought our strength up to nine and work was begun laying a temporary timber deck of 2 x I 0 bolted to the beams, seams caulked, roofing tar over all and a sheathing of Yz inch plywood over that, a task finished by mid-September. A Greek shipfitter, his assistant and a welder were hired for three weeks to renew F and G strakes between the frames 3 and 25 and a portion of the break of poop. These plates had not been renewed on slipway due to their height above the waterline,

but had to be made good before the ship could be taken to sea. The job that took the longest was restowing the 150 tons of steel, timber, wire rope, tools, piping, etc., that had been brought over as a build-a-bark kit and were now so many millstones around our necks. These materials would, of course, be needed and if not aboard we would have had to purchase ballast (although that would have been much easier to deal with). Weight had to be shifted to trim the ship 2&#39; down by the stern with O&quot; list, with the center of gravity as low as possible. Extraordinary care was taken to shore and wedge every object against lateral movement and against vertical pounding by lashings of Yz&quot; wire to the bilge keelsons. Much steel banding was used and some tomming bars were welded in. This kept four men working until early October. The remainder of the crew busied themselves refastening tow bitts, reinforcing hawsepipes, putting a doubler on the collision bulkhead, closing off innumerable openings, and building a steel deckhouse to protect the generator, which had to remain operable to run emergency pumps and lighting. The biggest job, however, was building and fitting a jury rudder to add directional stability for the tow. The ship&#39;s own rudder is of insufficient area for towing purposes and was stowed in the bottom of the hold. The jury rudder weighed over a ton and had to be got under the stern 40 feet beyond reach of the ship&#39;s derricks, and fitted underwater. This required three men for a week . In October our work force shrunk to four. The rest of our crew had to get back to making a living in the real world. There was a rush to get things done before funds ran out or winter came but with fewer people things took longer, even working 8 AM to 6 PM, six days a week. October 21 was the last day the entire crew worked aboard. We were not completely finished, but the remaining tasks could all be done by one man without being guaranteed to kill himself. Michael Creamer remained in Greece as shipkeeper and owner&#39;s agent with a plea for a tow home &quot;before both our beards touch the bottom.&quot; This was avoided through the efforts of Gus Rankin, who used to work with Throckmorton, to arrange towage at a favorable price. The Long Voyage After nine years at anchor, not a cable&#39;s length from the waiting shipbreaker&#39;s yards, Elissa departed Piraeus behind the Italian tug Mare Ionio on December 12, 1978. After encountering heavy weather SEA HISTORY, FALL 1979