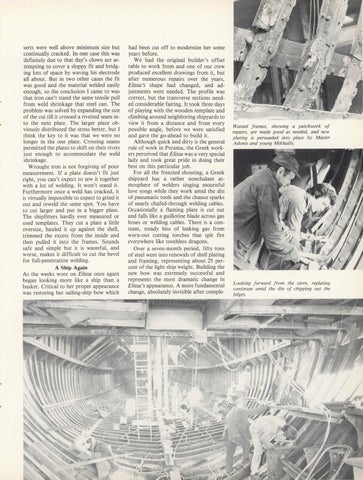 serts were well above minimum size but continually cracked. In one case this was definitely due to that day&#39;s clown act attempting to cover a sloppy fit and bridging lots of space by waving his electrode all about. But in two other cases the fit was good and the material welded easily enough, so the conclusion I came to was that iron can&#39;t stand the same tensile pull from weld shrinkage that steel can. The problem was solved by expanding the size of the cut till it crossed a rivetted seam into the next plate. The larger piece obviously distributed the stress better, but I think the key to it was that we were no longer in the one plate. Crossing seams permitted the plates to shift on their rivets just enough to accommodate the weld shrinkage. Wrought iron is not forgiving of poor measurement. If a plate doesn&#39;t fit just right, you can&#39;t expect to sew it together with a lot of welding. It won&#39;t stand it. Furthermore once a weld has cracked, it is virtually impossible to expect to grind it out and reweld the same spot. You have to cut larger and put in a bigger plate. The shipfitters hardly ever measured or used templates. They cut a plate a little oversize, hauled it up against the shell, trimmed the excess from the inside and then pulled it into the frames. Sounds safe and simple but it is wasteful, and worse, makes it difficult to cut the bevel for full-penetration welding. A Ship Again As the weeks wore on Elissa once again began looking more like a ship than a basket. Critical to her proper appearance was restoring her sailing-ship bow which

had been cut off to modernize her some years before. We had the original builder&#39;s offset table to work from and one of our crew produced excellent drawings from it, but after numerous repairs over the years, Elissa&#39;s shape had changed, and adjustments were needed. The profile was correct, but the transverse sections needed considerable fairing. It took three days of playing with the wooden template and climbing around neighboring shipyards to view it from a distance and from every possible angle, before we were satisfied and gave the go-ahead to build it. Although quick and dirty is the general rule of work in Perama, the Greek workers perceived that Elissa was a very special lady and took great pride in doing their best on this particular job. For all the frenzied shouting, a Greek shipyard has a rather nonchalant atmosphere of welders singing mournful love songs while they work amid the din of pneumatic tools and the chance sparks of nearly chafed-through welding cables. Occasionally a flaming plate is cut out and falls like a guillotine blade across gas hoses or welding cables. There is a constant, steady hiss of leaking gas from worn-out cutting torches that spit fire everywhere like toothless dragons. Over a seven-month period, fifty tons of steel went into renewals of shell plating and framing, representing about 25 percent of the light ship weight. Building the new bow was extremely successful and represents the most dramatic change in Elissa&#39;s appearance. A more fundamental change, absolutely invisible after comple-

Wasted frames, showing a patchwork of repairs, are made good as needed, and new plating is persuaded into place by Master Adonis and young Mikhailis.

Looking forward from the stern, replating continues amid the din of chipping out the bilges.