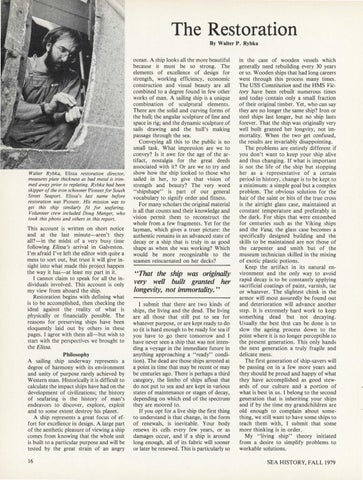 The Restoration By Walter P. Rybka

Walter Rybka, Elissa restoration director, measures plate thickness as bad metal is trimmed away prior to replating. Rybka had been skipper of the iron schooner Pioneer for South Street Seaport. Elissa&#39;s last name before restoration was Pioneer. His mission was to get this ship similarly fit for seafaring. Volunteer crew included Doug Manger, who took this photo and others in this report.

This account is writfen on short notice and at the last minute-aren&#39;t they all?-in the midst of a very busy time following Elissa&#39;s arrival in Galveston. I&#39;m afraid I&#39;ve left the editor with quite a mess to sort out, but trust it will give insight into what made this project happen the way it has-at least my part in it. I cannot claim to speak for all the individuals involved. This account is only my view from aboard the ship. Restoration begins with defining what is to be accomplished, then checking the ideal against the reality of what is physically or financially possible. The reasons for preserving ships have been eloquently laid out by others in these pages. I agree with them all-but wish to start with the perspectives we brought to the Elissa. Philosophy

A sailing ship underway represents a degree of harmony with its environment and unity of purpose rarely achieved by Western man. Historically it is difficult to calculate the impact ships have had on the development of civilizations; the history of seafaring is the history of man&#39;s endeavors to discover, explore, exploit and to some extent destroy his planet. A ship represents a great focus of effort for excellence in design . A large part of the aesthetic pleasure of viewing a ship comes from knowing that the whole unit is built to a particular purpose and will be tested by the great strain of an angry 16

ocean. A ship looks all the more beautiful because it must be so strong. The elements of excellence of design for strength, working efficiency, economic construction and visual beauty are all combined to a degree found in few other works of man. A sailing ship is a unique combination of sculptural elements. There are the solid and curving forms of the hull; the angular sculpture of line and space in rig; and the dynamic sculpture of sails drawing and the hull&#39;s making passage through the sea. Conveying all this to the public is no small task. What impression are we to convey? Is it awe for the age of the artifact, nostalgia for the great deeds associated with it? Or are we to try and show how the ship looked to those who sailed in her, to give that vision of strength and beauty? The very word &quot;shipshape&quot; is part of our general vocabulary to signify order and fitness . For many scholars the original material is all that counts and their knowledge and vision permit them to reconstruct the whole from a few fragments. Yet for the layman, which gives a truer picture: the authentic remains in an advanced state of decay or a ship that is truly in as good shape as when she was working? Which would be more recognizable to the seamen reincarnated on her decks?

&#39;&#39;That the ship was originally very well built granted her longevity, not immortality. &quot; I submit that there are two kinds of ships, the living and the dead. The living are all those that still put to sea for whatever purpose, or are kept ready to do so (it is hard enough to be ready for sea if you have to go there tomorrow and I have never seen a ship that was not intending a voyage in the immediate future in anything approaching a &quot;ready&quot; condition). The dead are those ships arrested at a point in time that may be recent or may be centuries ago. There is perhaps a third category, the limbo of ships afloat that do not put to sea and are kept in various states of maintenance or stages of decay, depending on which end of the spectrum they are moored to. If you opt for a live ship the first thing to understand is that change, in the form of renewals, is inevitable. Your body renews its cells every few years, or as damages occur, and if a ship is around long enough, all of its fabric will sooner or later be renewed. This is particularly so

in the case of wooden vessels which generally need rebuilding every 30 years or so. Wooden ships that had long careers went through this process many times. The USS Constitution and the HMS Victory have been rebuilt numerous times and today contain only a small fraction of their original timber. Yet, who can say they are no longer the same ship? Iron or steel ships last longer, but no ship lasts forever. That the ship was originally very well built granted her longvity, not immortality. When the two get confused, the results are invariably disappointing. The problems are entirely different if you don&#39;t want to keep your ship alive and thus changing. If what is important is not the life of the ship but stopping her as a representative of a certain period in history, change is to be kept to a minimum: a simple goal but a complex problem. The obvious solution for the hair of the saint or bits of the true cross is the airtight glass case, maintained at constant temperature and preferably in the dark. For ships that were entombed for centuries such as the Viking ships and the Vasa, the glass case becomes a specifically designed building and the skills to be maintained are not those of the carpenter and smith but of the museum technician skilled in the mixing of exotic plastic potions. Keep the artifact in its natural environment and the only way to avoid rapid decay is to be constantly applying sacrificial coatings of paint, varnish, tar or whatever. The slightest chink in the armor will most assuredly be found out and deterioration will advance another step. It is extremely hard work to keep something dead but not decaying. Usually the best th&#39;it can be done is to slow the ageing process down to the point where it is no longer perceptible to the present generation. This only hands the next generation a truly fragile and delicate mess. The first generation of ship-savers will be passing on in a few more years and they should be proud and happy of what they have accomplished as good stewards of our culture and a portion of what is best in us. I belong to the second generation that is inheriting your ships and if by the time my grandchildren are old enough to complain about something, we still want to have some ships to teach them with, I submit that some more thinking is in order. My &quot;living ship&quot; theory initiated from a desire to simplify problems to workable solutions. SEA HISTORY, FALL 1979