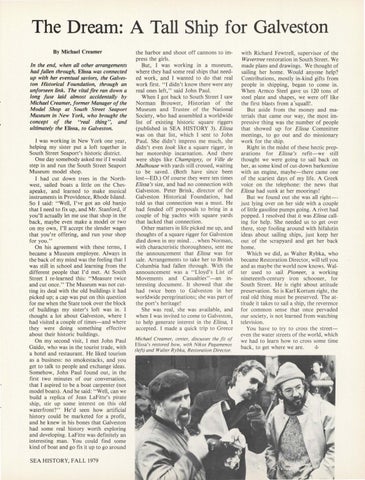 The Dream: A Tall Ship for Galveston By Michael Creamer In the end, when all other arrangements had f alien through, Elissa was connected up with her eventual saviors, the Galveston Historical Foundation, through an unforseen link. The vital fire ran down a long fuse laid almost accidentally by Michael Creamer, former Manager of the Model Shop at South Street Seaport Museum in New York, who brought the concept of the &quot;real thing&quot;, and ultimately the Elissa, to Galveston. I was working in New York one year, helping my sister put a loft together in South Street Seaport&#39;s historic district. One day somebody asked me if I would step in and run the South Street Seaport Museum model shop. I had cut down trees in the Northwest, sailed boats a little on the Chesapeake, and learned to make musical instruments in Providence, Rhode Island. So I said: &quot;Well, I&#39;ve got an old banjo that I need to fix up, and Mr. Stanford, if you&#39;ll actually let me use that shop in the back, maybe even make a model or two on my own, I&#39;ll accept the slender wages that you&#39;re offering, and run your shop for you .&quot; On his agreement with these terms, I became a Museum employee. Always in the back of my mind was the feeling that I was still in school and learning from the different people that I&#39;d met. At South Street I re-learned this: &quot;Measure twice and cut once.&quot; The Museum was not cutting its deal with the old buildings it had picked up; a cap was put on this question for me when the State took over the block of buildings my sister&#39;s loft was in. I thought. a lot about Galveston, where I had visited a couple of times-and where they were doing something effective about their historic buildings. On my second visit, I met John Paul Gaido, who was in the tourist trade, with a hotel and restaurant. He liked tourism as a business: no smokestacks, and you get to talk to people and exchange ideas. Somehow, John Paul found out, in the first two minutes of our conversation, that I aspired to be a boat carpenter (not model boats). And he said: &quot;Well, can we build a replica of Jean LaFitte&#39;s pirate ship, stir up some interest on this old waterfront?&quot; He&#39;d seen how artificial history could be marketed for a profit, and he knew in his bones that Galveston had some real history worth exploring and developing. LaFitte was definitely an interesting man. You could find some kind of boat and go fix it up to go around SEA HISTORY, FALL 1979

the harbor and shoot off cannons to impress the girls. But, I was working in a museum, where they had some real ships that needed work, and I wanted to do that real work first. &quot; !didn&#39;t know there were any real ones left,&quot; said John Paul. When I got back to South Street I saw Norman Brouwer, Historian of the Museum and Trustee of the National Society, who had assembled a worldwide list of existing historic square riggers (published in SEA HISTORY 3). Elissa was on that list, which I sent to John Paul. She didn&#39;t impress me much, she didn&#39;t even look like a square rigger, in her motorship incarnation . And there were ships like Champigny, or Ville de Mu/house with yards still crossed, waiting to be saved . . (Both have since been lost-ED.) Of course they were ten times Elissa&#39;s size, and had no connection with Galveston. Peter Brink , director of the Galveston Historical Foundation, had told us that connection was a must. He had fended off proposals to bring in a couple of big yachts with square yards that lacked that connection. Other matters in life picked me up, and thoughts of a square rigger for Galveston died down in my mind ... when Norman, with characteristic thoroughness, sent me the Âˇannoun.cement that Elissa was for sale. Arrangements to take her to British Columbia had fallen through. With the announcement was a &quot;Lloyd&#39;s List of Movements and Casualties&quot;-an interesting document. It showed that she had twice been to Galveston in her worldwide peregrinations; she was part of the port&#39;s heritage! She was real, she was available, and when I was invited to come to Galveston, to help generate interest in the Elissa, I accepted. I made a quick trip to Greece Michael Creamer, center, discusses the fit of Elissa&#39;s restored bow, with Nikos Pagamenos (left) and Walter Rybka, Restoration Director.

with Richard Fewtrell, supervisor of the Wavertree restoration in South Street. We made plans and drawings. We thought of sailing her home. Would anyone help? Contributions, mostly in-kind gifts from people in shipping, began to come in. When Armco Steel gave us 120 tons of steel plate and shapes, we were off like the first blasts from a &#39;squall! . But aside from the money and materials that came our way, the most impressive thing was the number of people that showed up for Elissa Committee meetings, to go out and do missionary work for the ship. Right in the midst of these hectic preparations for Elissa&#39;s refit-we still thought we were going to sail back on her, as some kind of cut-down barkentine with an engine, maybe-there came one of the scariest days of my life. A Greek voice on the telephone: the news that Elissa had sunk at her moorings! But we found out she was all right-just lying over on her side with a couple of little gasoline pumps going. A rivet had popped . I resolved that it was Elissa calling for help. She needed us to get over there, stop fooling around with hifalutin ideas about sailing ships, just keep her out of the scrapyard and get her back home. Which we did, as Walter Rybka, who became Restoration Director, will tell you and as maybe the world now knows. Walter used to sail Pioneer, a working nineteenth-century iron schooner, for South Street. He is right about attitude preservation. So is Karl Kortum right, the real old thing must be preserved . The attitude it takes to sail a ship, the reverence for common sense that once pervaded our society, is not learned from watching television. You have to try to cross the streeteven the water streets of the world, which we had to learn how to cross some time w back, to get where we are.