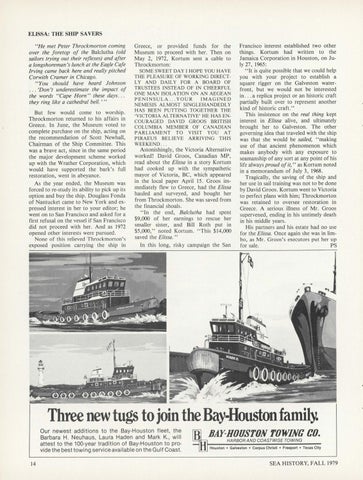 &quot;He met Peter Throckmorton coming over the foretop of the Balclutha (old sailors trying out their reflexes) and after a longshoreman&#39;s lunch at the Eagle Cafe Irving came back here and really pitched Corwith Cramer in Chicago. &quot;You should have heard Johnson ... &#39;Don&#39;t underestimate the impact of the words &quot;Cape Horn&quot; these days . . . they ring like a cathedral bell.&#39;&quot; But few would come to worship . Throckmorton returned to his affairs in Greece. In June, the Museum voted to complete purchase on the ship, acting on the recommendation of Scott Newhall, Chairman of the Ship Committee. This was a brave act, since in the same period the major development scheme worked up with the Wrather Corporation, which would have supported the bark&#39;s full restoration, went in abeyance. As the year ended, the Museum was forced to re-study its ability to pick up its option and buy the ship . Douglass Fonda of Nantucket came to New York and expressed interest in her to your editor; he went on to San Francisco and asked for a first refusal on the vessel if San Francisco did not proceed with her. And as 1972 opened other interests were pursued. None of this relieved Throckmorton&#39;s exposed position carrying the ship in

Greece, or provided funds for the Museum to proceed with her. Then on May 2, 1972, Kortum sent a cable to Throckmorton: SOME SWEET DAY I HOPE YOU HA VE THE PLEASURE OF WORKING DIRECTLY AND DAILY FOR A BOARD OF TRUSTEES INSTEAD OF IN CHEERFUL ONE MAN ISOLATION ON AN AEGEAN PENINSULA . .. YOUR IMAGINED NEMESIS ALMOST SINGLEHANDEDLY HAS BEEN PUTTING TOGETHER THE &#39;VICTORIA ALTERNATIVE&#39; HE HAS ENCOURAGED DA YID GROOS BRITISH COLUMBIA MEMBER OF CANADIAN PARLIAMENT TO VISIT YOU AT PIRAEUS BELIEVE ARRIVING THIS WEEKEND . . .

Astonishingly, the Victoria Alternative worked! David Groos, Canadian MP, read about the Elissa in a story Kortum had cooked up with the sympathetic mayor of Victoria, BC, which appeared in the local paper April 15. Groos immediately flew to Greece, had the Elissa hauled and surveyed, and bought her from Throckmorton . She was saved from the financial shoals. &quot;In the end, Balclutha had spent $9,000 of her earnings to rescue her smaller sister, and Bill Roth put in $5,000,&quot; noted Kortum. &quot;This $14,000 saved the Elissa. &quot; In this long, risky campaign the San

Francisco interest established two other things. Kortum had written to the Jamaica Corporation in Houston, on July 27, 1965: &quot;It is quite possible that we could help you with your project to establish a square rigger on the Galveston waterfront, but we would not be interested in ... a replica project or an historic craft partially built over to represent another kind of historic craft.&quot; This insistence on the real thing kept interest in Elissa alive, and ultimately brought her to Galveston. The other governing idea that traveled with the ship was that she would be sailed, &quot;making use of that ancient phenomenon which makes anybody with any exposure to seamanship of any sort at any point of his life always proud of it,&quot; as Kortum noted in a memorandum of July 3, 1968. Tragically, the saving of the ship and her use in sail training was not to be done by David Groos. Kortum went to Victoria to perfect plans with him; Throckmorton was retained to oversee restoration in Greece. A serious illness of Mr. Groos supervened, ending in his untimely death in his middle years. His partners and his estate had no use for the Elissa. Once again she was in limbo, as Mr. Groos&#39;s executors put her up for sale. PS

Three new tugs to join the Bay-Houston family. Our newest additions to the Bay-Houston fleet , the Barbara H. Neuhaus, Laura Haden and Mark K., will attest to the 100-year tradition of Bay-Houston to provide the best towing service available on the Gulf Coast. 14