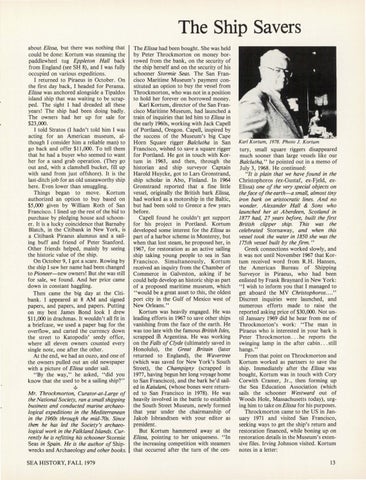 The Ship Savers about Elissa, but there was nothing that could be done: Kortum was steaming the paddlewheel tug Eppleton Hall back from England (see SH 8), and I was fully occupied on various expeditions. I returned to Piraeus in October. On the first day back, I headed for Perama. Elissa was anchored alongside a Tipaldos island ship that was waiting to be scrapped. The sight I had dreaded all these years! The ship had been doing badly. The owners had her up for sale for $23,000. I told Stratos (I hadn&#39;t told him I was acting for an American museum, although I consider him a reliable man) to go back and offer $11,000. To tell them that he had a buyer who seemed to want her for a sand grab operation. (They go out and, with a clamshell bucket, fill up with sand from just offshore). It is the last-ditch job for an old unseaworthy ship here. Even lower than smuggling. Things began to move. Kortum authorized an option to buy based on $5,000 given by William Roth of San Francisco. I lined up the rest of the bid to purchase by pledging house and schooner. It is a lucky coincidence that Barnaby Blatch, in the Citibank in New York, is a Citibank Piraeus alumnus and a sailing buff and friend of Peter Stanford. Other friends helped, mainly by seeing the historic value of the ship. On October 9, I got a scare. Rowing by the ship I saw her name had been changed to Pioneer-new owners! But she was still for sale, we found. And her price came down in constant haggling. Then came the big day at the Citibank. I appeared at 8 AM and signed papers, and papers, and papers. Putting on my best James Bond look I drew $11,000 in drachmas. It wouldn&#39;t all fit in a briefcase, we used a paper bag for the overflow, and carted the currency down the street to Katopodis&#39; seedy office, where all eleven owners counted every single note, one after the other. At the end, we had an ouzo, and one of the owners pulled out an old newspaper with a picture of Elissa under sail. &quot;By the way,&quot; he asked, &quot;did you know that she used to be a sailing ship?&quot;

.t Mr. Throckmorton, Curator-at-Large of the National Society, ran a small shipping business and conducted marine archaeological expeditions in the Mediterranean in the 1960s through the mid-70s. Since then he has led the Society&#39;s archaeological work in the Falkland Islands. Currently he is refitting his schooner Stormie Seas in Spain. He is the author of Shipwrecks and Archaeology and other books. SEA HISTORY, FALL 1979

The Elissa had been bought. She was held by Peter Throckmorton on money borrowed from the bank, on the security of the ship herself and on the security of his schooner Stormie Seas. The San Francisco Maritime Museum&#39;s payment constituted an option to buy the vessel from Throckmorton, who was not in a position to hold her forever on borrowed money. Karl Kortum, director of the San Francisco Maritime Museum, had launched a train of inquiries that led him to Elissa in the early 1960s, working with Jack Capell of Portland, Oregon. Capell, inspired by the success of the Museum&#39;s big Cape Horn Square rigger Balclutha in San Francisco, wished to save a square rigger for Portland. He got in touch with Kortum in 1963, and then, through the historian and ship surveyor Captain Harold Huycke, got to Lars Gronstrand, ship scholar in Abo, Finland. In 1964 Gronstrand reported that a fine little vessel, originally the British bark Elissa, had worked as a motorship in the Baltic, but had been sold to Greece a few years before. Capell found he couldn&#39;t get support for his project in Portland. Kortum developed some interest for the Elissa as part of a harbor scheme in Monterey, but when that lost steam, he proposed her, in 1967, for restoration as an active sailing ship taking young people to sea in San Francisco. Simultaneously, Kortum received an inquiry from the Chamber of Commerce in Galveston, asking if he could help develop an historic ship as part of a proposed maritime museum, which &quot;would be a great asset to this, the oldest port city in the Gulf of Mexico west of New Orleans.&quot; Kortum was heavily engaged. He was leading efforts in 1967 to save other ships vanishing from the face of the earth. He was too late with the famous British Isles, scrapped Argentina. He was working on the Falls of Clyde (ultimately saved in Honolulu), the Great Britain (later returned to England), the Wavertree (which was saved for New York&#39;s South Street), the Champigny (scrapped in 1977, having begun her long voyage home to San Francisco), and the bark he&#39;d sailed in Kaiulani, (whose hon.es were returned to San Francisco in 1978). He was heavily involved in the battle to establish the South Street Museum, newly formed that year under the chairmanship of Jakob Isbrandtsen with your editor as president. But Kortum hammered away at the Elissa, pointing to her uniqueness. &quot;In the increasing competition with steamers that occurred after the turn of the cen-

tury, small square riggers disappeared much sooner than large vessels like our Balclutha,&quot; he pointed out in a memo of July 3, 1968. He continued: &quot;It is plain that we have found in the Christophoros (ex-Gustaf, ex-Fjeld, exElissa) one of the very special objects on the face of the earth-a small, almost tiny iron bark on aristocratic lines. And no wonder. Alexander Hall &amp; Sons who launched her at Aberdeen, Scotland in 1877 had, 27 years before, built the first British clipper ship. This was the celebrated Stornaway, and when this vessel took the water in 1850 she was the 175th vessel built by the firm . &quot; Greek connections worked slowly, and it was not until November 1967 that Kortum received word from R.H. Hansen, the American Bureau of Shipping Surveyor in Piraeus, who had been enlisted by Frank Braynard in New York: &quot;I wish to inform you that I managed to get aboard the MY Christophoros .... &quot; Discreet inquiries were launched, and numerous efforts made to raise the reported asking price of $30,000. Not until January 1969 did he hear from me of Throckmorton&#39;s work: &quot;The man in Piraeus who is interested in your bark is Peter Throckmorton . . . he reports the swinging lamp in the after cabin ... still hangs.&quot; From that point on Throckmorton and Kortum worked as partners to save the ship. Immediately after the Elissa was bought, Kortum was in touch with Cory Corwith Cramer, Jr., then forming up the Sea Education Association (which sails the schooner Westward out of Woods Hole, Massachusetts today), urging him to take on Elissa for his purposes. Throckmorton came to the US in January 1971 and visited San Francisco, seeking ways to get the ship&#39;s return and restoration financed, while boning up on restoration details in the Museum&#39;s extensive files. Irving Johnson visited. Kortum notes in a letter: 13