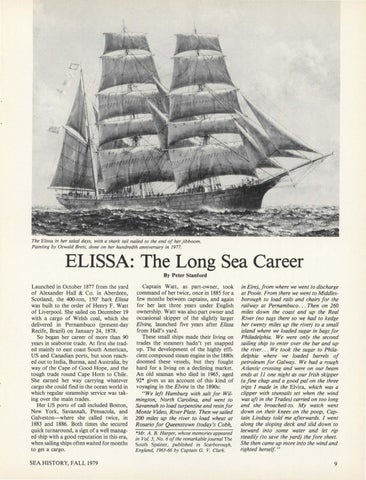 The Elissa in her salad days, with a shark tail nailed to the end of her jibboom. Painting by Oswald Brett, done on her hundredth anniversary in 1977.

Launched in October 1877 from the yard of Alexander Hall &amp; Co. in Aberdeen, Scotland, the 400-ton, 150&#39; bark Elissa was built to the order of Henry F. Watt of Liverpool. She sailed on December 19 with a cargo of Welsh coal, which she delivered in Pernambuco (present-day Recife, Brazil) on January 24, 1878. So began her career of more than 90 years in seaborne trade. At first she traded mainly to east coast South American, US and Canadian ports, but soon reached out to India, Burma, and Australia, by way of the Cape of Good Hope, and the tough trade round Cape Horn to Chile. She earned her way carrying whatever cargo she could find in the ocean world in which regular steamship service was taking over the main trades. Her US ports of call included Boston, New York, Savannah, Pensacola, and Galveston-where she called twice, in 1883 and 1886. Both times she secured quick turnaround, a sign of a well managed ship with a good reputation in this era, when sailing ships often waited for months to get a cargo. SEA HISTORY, FALL 1979

Captain Watt, as part-owner, took command of her twice, once in 1885 for a few months between captains, and again for her last three years under English ownership. Watt was also part owner and occasional skipper of the slightly larger Elvira, launched five years after Elissa from Hall&#39;s yard . These small ships made their living on trades the steamers hadn&#39;t yet snapped up. The development of the highly efficient compound steam engine in the 1880s doomed these vessels, but they fought hard for a living on a declining market. An old seaman who died in 1965, aged 92* gives us an account of this kind of voyaging in the Elvira in the 1890s: &quot;We left Hamburg with salt for Wilmington, North Carolina, and went to Savannah to load turpentine and resin for Monte Video, River Plate. Then we sailed 200 miles up the river to load wheat at Rosario for Queenstown (today&#39;s Cobh, *Mr. A . B. Harper, whose memories appeared in Vol. 3, No. 6oftheremarkablejourna1The South Spainer, published in Scarborough, England, 1963-66 by Captain G. V. Clark.

in Eire), from where we went to discharge at Poole. From there we went to Middlesborough to load rails and chairs for the railway at Pernambuco . . . Then on 260 miles down the coast and up the Real River (no tugs there so we had to kedge her twenty miles up the river) to a small island where we loaded sugar in bags for Philadelphia. We were only the second sailing ship to enter over the bar and up the river . .. We took the sugar to Philadelphia where we loaded barrels of petroleum for Galway. We had a rough Atlantic crossing and were on our beam ends at 11 one night as our Irish skipper (a fine chap and a good pal on the three trips I made in the Elvira, which was a clipper with stunsails set when the wind was aft in the Trades) carried on too long and she broached-to. My watch went down on their knees on the poop, Captain Lindsay told me afterwards. I went along the sloping deck and slid down to leeward into some water and let rip steadily (to save the yard) the fore sheet. She then came up more into the wind and righted herself. &quot; 9