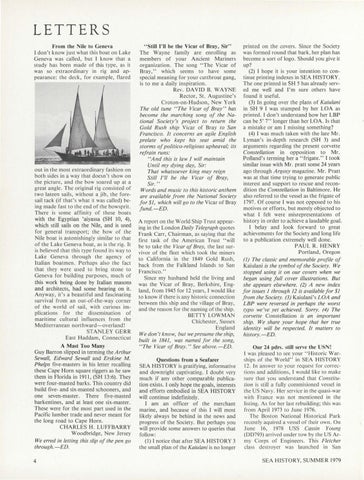 LETTERS From the Nile to Geneva I don&#39;t know just what this boat on Lake Geneva was called, but I know that a study has been made of this type, as it was so extraordinary in rig and appearance: the deck, for example, flared

out in the most extraordinary fashion on both sides in a way that doesn&#39;t show on the picture, and the bow soared up at a great angle. The original rig consisted of two lateen sails, without a jib, the fore sail tack (if that&#39;s what it was called) being made fast to the end of the bowsprit. There is some affinity of these boats with the Egyptian &#39;aiyassa (SH IO, 4), which still sails on the Nile, and is used for general transport; the bow of the Nile boat is astonishingly similar to that of the Lake Geneva boat, as is the rig. It is believed that this type found its way to Lake Geneva through the agency of Italian boatmen. Perh aps also the fact that they were used to bring stone to Geneva for building purposes, much of this work being done by Italian masons and architects, had some bearing on it. Anyway, it&#39;s a beautiful and fascinating survival from an out-of-the-way corner of the world of sail, with curious implications for the dissemination of maritime cultural influences from the Mediterranean northward-overland! STANLEY GERR East Haddam, Connecticut A Mast Too Many Guy Barron slipped in terming the Arthur Sewall, Edward Sewall and Erskine M. Phelps five-masters in his letter recalling these Cape Horn square riggers as he saw them in Florida in 1911, (SH 13:6). They were four-masted barks. This country did build five- and six-masted schooners, and one seven-master. There five-masted barkentines, and at least one six-master. These were for the most part used in the Pacific lumber trade and never meant for the long road to Cape Horn . CHARLES H. LUFFBARRY Woodbridge, New Jersey

We erred in letting this slip of the pen go through. -ED. 4

&quot;Still I&#39;ll be the Vicar of Bray, Sir&quot; The Wayne family are enrolling as members of your Ancient Mariners organization. The song &quot;The Vicar of Bray,&quot; which seems to have some special meaning for your cutthroat gang, is to me a daily inspiration. Rev. DAVID B. WAYNE Rector, St. Augustine&#39;s Croton-on-Hudson, New York

The old tune &quot;The Vicar of Bray&quot; has become the marching song of the National Society&#39;s project to return the Gold Rush ship Vicar of Bray to San Francisco. It concerns an agile English prelate who kept his seat amid the storms of politico-religious upheaval; its refrain runs: &quot;And this is law I will maintain Until my dying day, Sir: That whatsoever king may reign Still I&#39;ll be the Vicar of Bray, Sir. &quot; Words and music to this historic anthem are available from the National Society for $1, which will go to the Vicar of Bray fund.-ED . A report on the World Ship Trust appearing in the London Daily Telegraph quotes Frank Carr, Chairman, as saying that the first task of the American Trust &quot;will be to take the Vicar of Bray, the last survivor of the fleet which took the miners to California in the 1849 Gold Rush, back from the Falk land Islands to San Francisco.&quot; Since my husband held the living and was the Vicar of Bray, Berkshire, England, from 1945 for 12 years, I would like to know if there is any historic connection between this ship and the village of Bray, and the reason for the naming of the ship. BETTY LOWMAN Chichester, Sussex England

We don&#39;t know, but we presume the ship, built in 1841, was named for the song, &quot;The Vicar of Bray. &quot; See above. -ED. Questions from a Seafarer SEA HISTORY is gratifying, informative and downright captivating. I doubt very much if any other comparable publication exists. I only hope the goals, interests and efforts embodied in SEA HISTORY will continue indefinitely. I am an officer of the merchant marine, and because of this I will most likely always be behind in the news and progress of the Society. But perhaps you will provide some answers to queries that follow: (1) I notice that after SEA HISTORY 3 the small plan of the Kaiulani is no longer

printed on the covers. Since the Society was formed round that bark, her plan has become a sort of logo. Should you give it up? (2) I hope it is your intention to continue printing indexes in SEA HISTORY. The one printed in SH 5 has already served me well and I&#39;m sure others have found it useful. (3) In going over the plans of Kaiulani in SH 9 I was stumped by her LOA as printed. I don&#39;t understand how her LBP can be 5&#39; 7&quot; longer than her LOA. Is that a mistake or am I missing something? (4) I was much taken with the late Mr. Lyman&#39;s in-depth research (SH 3) and arguments regarding the present corvette Constellation in opposition to Mr. Polland&#39;s terming her a &quot;frigate.&quot; I took similar issue with Mr. pratt some 24 years ago through Argosy magazine. Mr. Pratt was at that time trying to generate public interest and support to rescue and recondition the Constellation in Baltimore. He also referred to the vessel as the frigate of 1797. Of course I was not opposed to his motives or efforts, but merely objected to what I felt were misrepresentations of history in order to achieve a laudable goal. I belay and look forward to great achievements for the Society and long life to a publication extremely well done. PAUL R. HENRY Portland, Oregon

(1) The classic and memorable profile of Kaiulani is the symbol of the Society. We stopped using it on our covers when we began using full cover illustrations. But she appears elsewhere. (2) A new index for issues 1 through 12 is available for $1 from the Society. (3) Kaiulani&#39;s LOA and LBP were reversed in perhaps the worst typo we&#39;ve yet achieved. Sorry. (4) The corvette Constellation is an important ship. We share your hope that her true identity will be respected. It matters to history. -ED. Our 24 pdrs. still serve the USN! I was pleased to see your &quot;H istoric Warships of the World&quot; in SEA HISTORY 12. In answer to your request for corrections and additions, I would like to make sure that you understand that Constitution is still a fully commisioned vessel in the US Navy. Her service in the quasi-war with France was not mentioned in the listing. As for her last rebuilding; this was from April 1973 to June 1976. The Boston National Historical Park recently aquired a vessel of their own. On June 16, 1978 USS Cassin Young (00793) arrived under tow by the US Army Corps of Engineers. This Fletcher class destroyer was launched in San SEA HISTORY, SUMMER 1979