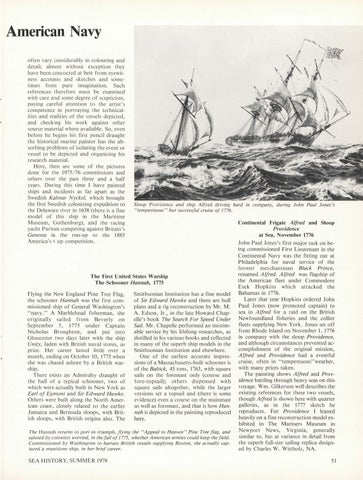 American Navy often vary considerably in colouring and detail; almost without exception they have been concocted at best from eyewitness accounts and sketches and sometimes from pure imagination. Such references therefore must be examined with care and so me degree of scepticism, paying careful attention to the artist&#39;s competence in portraying the technicalities and realities of the vessels depicted, and checking hi s work against other so urce material where available. So, even before he begins hi s fir st pencil draught the historical marine painter has the abso rbing problems of isolating the event or vessel to be depicted and organizing his research material. Here, then are some of the pictures done for the 1975176 commissions and others over the past three and a half years. During this time I have painted ships and incidents as far apart as the Swedish Kalmar Nyckel, which brought the first Swedish colonizing expedition to the Delaware river in 1638 (there is a fine model of this ship in the Maritime Museum, Gothenburg), and the racing yacht Puritan competing against Britain&#39; s Genesta in the run-up to the 1885 America&#39;s t &#39;up competition.

The First United States Warship The Schooner Hannah, 1775 Flying the New England Pine Tree Flag, the schooner Hannah was the first commissioned ship of General Washington&#39;s &quot;navy .&quot; A Marblehead fisherman, she originally sailed from Beverly on September 5, 1775 under Captain Nicholas Broughton, and put into Gloucester two days later with the ship Unity, laden with British naval stores, as prize. Her career lasted little over a month, ending on October 10, 1775 when she was chased ashore by a British warship . There exists an Admiralty draught of the hull of a typical sc hooner, two of which were actually built in New York as Earl of Egmont and Sir Edward Hawke. Others were built along the North American coast, closely related to the earlier Jamaica and Bermuda sloops, with British sloops, with British origins also. The

Smithsonian Institution has a fine model of Sir Edward Hawke and there are hull plans and a rig reconstruction by Mr. M. A. Edson, Jr., in the late Howard Chapelle&#39;s book The Search For Speed Under Sail. Mr. Chapelle performed an inestimable service by his Ii felong researches, as distilled in his various books and reflected in many of the superb ship models in the Sm ithsonian Institution and elsewhere. One of the earliest accurate impressions of a Massachusett s-built sc hooner is of the Ba/tick, 45 tons, 1763, with square sails on the foremast only (course and fore-topsail); others dispensed with square sai ls altogether, while the larger versions set a topsail and (there is some ev idence) even a course on the mainmast as well as foremast, and that is how Hannah is depicted in the painting reproduced here.

The Ha nn a h returns to port in triumph, flying the &quot;Appeal to Heaven&quot; Pine Tree flag, and saluted by colonists worried, in the fall of 1775, whether American armies could keep the field. Commissioned by Washington to harrass British vessels supplying Boston, she actually captured a munitions ship, in her brief career.

Continental Frigate Alfred and Sloop Providence at Sea, November 1776 John Paul Jones&#39;s first major task on being commissioned First Lieutenant in the Continental Navy was the fitting out at Philadelphia for naval service of the former merchantman Black Prince, renamed Alfred. Alfred was flagship of the American fleet under Commodore Esek Hopkins which attacked the Bahamas in 1776. Later that year Hopkins ordered John Paul Jones (now promoted captain) to sea in Alfred for a raid on the British Newfoundland fisheries and the collier fleets supplying New York . Jones set off from Rhode Island on November 1, 1776 in company with the sloop Providence, and although circumstances prevented accomplishment of the original mission, Alfred and Providence had a eventful cruise, often in &quot;tempestuous&quot;weather, with many prizes taken. The painting shows Alfred and Providence battling through heavy seas on this voyage. Wm . Gilkerson well describes the existing references for these two vessels, though Alfred is shown here with quarter galleries, as in the 1777 sketch he reproduces. For Providence I leaned heavily on a fine reconstruction model exhibited in The Mariners Museum in Newport News, Virginia, generally simi lar to , bu t at vari ance in detail from the superb full-size sai ling replica designed by Charles W. Wittholz, NA. 51