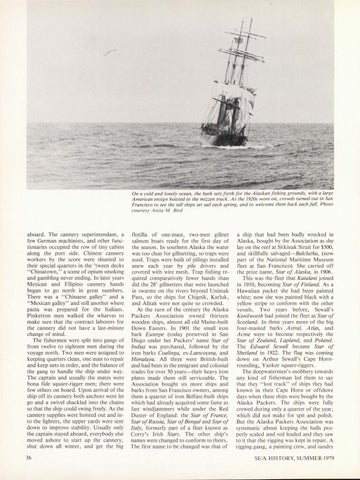 On a cold and lonely ocean, the bark sets forlh for the Alaskan fishing grounds, with a large American ensign hoisted to the mizzen truck. As the 1920s wore on, crowds turned out in San Francisco lo see the tall ships set sail each spring, and to welcome them back each fall. Photo courtesy Anita M. Bird

aboard. The cannery superintendant, a few German machinists, and other functionaries occupied the row of tiny cabins along the port side. Chinese cannery workers by the score were shunted to their special quarters in the 'tween decks "Chinatown," a scene of opium smoking and gambling never ending. In later years Mexican and Filipino cannery hands began to go north in great numbers. There was a "Chinaese galley" and a "Mexican galley" and still another where pasta was prepared for the Italians. Pinkerton men walked the wharves to make sure that the contract laborers for the cannery did not have a last-minute change of mind. The fishermen were split into gangs of from twelve to eighteen men during the voyage north. Two men were assigned to keeping quarters clean, one man to repair and keep nets in order, and the balance of the gang to handle the ship under way. The captain and usually the mates were bona fide square-rigger men; there were few others on board. Upon arrival of the ship off its cannery both anchors were let go and a swivel shackled into the chains so that the ship could swing freely. As the cannery supplies were hoisted out and into the lighters, the upper yards were sent down to improve stability. Usually only the captain stayed aboard, everybody else moved ashore to start up the cannery, shut down all winter, and get the big 36

flotilla of one-mast, two-men gillnet salmon boats ready for the first day of the season. In southern Alaska the water was too clear for gillnetting, so traps were used. Traps were built of pilings installed anew each year by pile drivers and covered with wire mesh. Trap fishing required comparatively fewer hands than did the 28' gillnetters that were launched in swarms on the rivers beyond Unimak Pass, so the ships for Chignik, Karluk, and Alitak were not quite so crowded. At the turn of the century the Alaska Packers Association owned thirteen wooden ships, almost all old Maine-built Down Easters. In 1901 the small iron bark Euterpe (today preserved in San Diego under her Packers' name Star of India) was purchased, followed by the iron barks Coalinga, ex-Laescocesa, and Himalaya. All three were British-built and had been in the emigrant and colonial trades for over 30 years-their heavy iron plates made them still serviceable. The Association bought six more ships and barks from San Francisco owners, among them a quartet of iron Belfast-built ships which had already acquired some fame as fast windjammers while under the Red Duster of England: the Star of France, Star of Russia, Star of Bengal and Star of Italy, formerly part of a fleet known as Corry's Irish Stars. The other ship's names were changed to conform to theirs. The first name to be changed was that of

a ship that had been badly wrecked in Alaska, bought by the Association as she lay on the reef at Sitkinak Strait for $500, and skillfully salvaged-Balc/utha, (now part of the National Maritime Museum fleet at San Francisco). She carried off the prize name, Star of Alaska, in 1906. This was the fleet that Kaiulani joined in 1910, becoming Star of Finland. As a Hawaiian packet she had been painted white; now she was painted black with a yellow stripe to conform with the other vessels. Two years before, Sewall's Kenilworth had joined the fleet as Star of Scotland. In three years more of the big four-masted barks Astral, Atlas, and Acme were to become respectively the Star of Zealand, Lapland, and Poland. The Edward Sewall became Star of Shetland in 1922. The flag was coming down on Arthur Sewall's Cape Hornrounding, Yankee square-riggers. The deepwatermen's snobbery towards any kind of fisherman led them to say that they "lost track" of ships they had known in their Cape Horn or offshore days when these ships were bought by the Alaska Packers. The ships were fully crewed during only a quarter of the year, which did not make for spit and polish. But the Alaska Packers Association was systematic about keeping the hulls properly scaled and red leaded and they saw to it that the rigging was kept in repair. A rigging gang, a painting crew, and sundry SEA HISTORY, SUMMER 1979