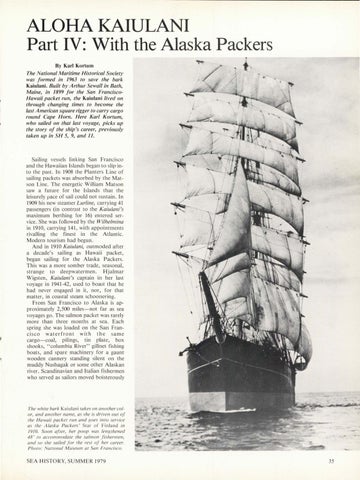 The National Maritime Historical Society was formed in 1963 to save the bark Kaiulani. Built by Arthur Sewall in Bath, Maine, in 1899 for the San FranciscoHawaii packet run, the Kaiulani lived on through changing times to become the last American square rigger to carry cargo round Cape Horn. Here Karl Kortum, who sailed on that last voyage, picks up the story of the ship&#39;s career, previously taken up in SH 5, 9, and 11.

Sai ling vessels linking San Francisco and the Hawaiian Islands bega n to slip into the past. In 1908 the Planters Line of sailing packets was absorbed by the Matson Line. The energet ic William Matso n saw a future for the Islands that the leisurely pace of sail cou ld not sustain. In 1909 his new steamer Lurline, carrying 41 passengers (in contrast to the Kaiulani&#39;s maximum berthing fo r 16) entered service. She was followed by the Wilhelmina in 19 10, carryi ng 141, with appointments rivalling the finest in the At lantic. Modern tourism had begun . And in 1910 Kaiulani, outmoded after a decade&#39;s sailing as Hawaii pac ket , began sailing for the A laska Packers. This was a more so mber trade, seaso nal, stra nge to deepwatermen . Hjalmar Wigsten , Kaiulani&#39;s captain in her last voyage in 1941-42, used to boast that he had never engaged in it, nor, for that matter, in coastal steam schoonering. From San Francisco to Alas ka is approximately 2,500 miles-not far as sea voyages go. The salmon packet was rarely more than three months at sea. Each spring she was loaded on the San Francisco waterfront with the sa me cargo-coal, pilings, tin plate, box shooks, &quot;columbia River&quot; gillnet fishin g boats, and spare machinery for a gaunt wooden cannery standing silent on the muddy Nushagak or some other A laskan river. Scandi navian and Italian fishermen who served as sailors moved boisterously

The white bark Kaiulani takes on another color, and another na111e, as she is driven out of the Hawaii packet run and f(oes into service as the Alaska Packers&#39; Star o f Finland in 1910. Soon after, her poop was lengt hened 48&#39; to acco111n1odate the sal111on jisher111en, and so she sailed for rhe rest of her career. Pl{(}fo: National Museu111 al San Francisco.