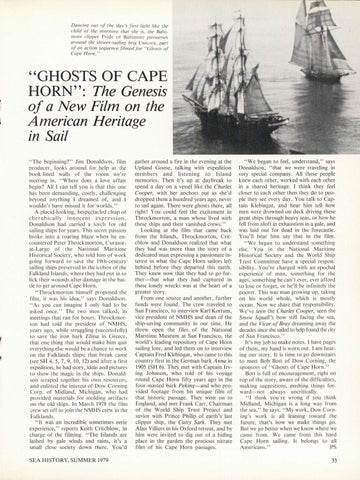 &quot;GHOSTS OF CAPE HORN&#39;&#39;: The Genesis of a New Film on the American Heritage in Sail &quot; The beginning?&quot; Jim Donaldso n, film producer, looks around for help at the book-lined walls of the room we&#39;re meeting in. &quot;Where does a love affair begin? All I can tell you is that this one has been demanding, costly, challenging beyond anything I dreamed of, and I wouldn&#39;t have missed it for worlds.&quot; A placid-looking, bespectacled chap of cherubically innocent expression, Donaldso n had carried a torch for old sailing ships for years. This secret passion broke into a roaring blaze when he encountered Peter Throckmorton , Curatorat-Large of the National Maritime Historical Society, who told him of work go ing forward to save the 19th-century sailing ships preserved in the icebox of the Falkland Islands, where they had put in to lick their wounds after damage in the battle to get around Cape Horn. &quot;Throckmorton himself proposed the film, it was &#39;his idea,&quot; says Donaldson. &quot;As you can imagine I only had to be asked once.&quot; The two men talked, in meetin gs that ran for hours. Throckmorton had told the president of NMHS, years ago, while struggling (successfully) to save the iron bark Elissa in Greece, that one thing that would make him quit everything else would be a chance to work on the Falklands ships; that break came (see SH 4, 5, 7, 9, 10, 12) and after a first expedition, he had story, ideas and pictures to show the magic in the ships. Donaldso n scraped together his own resources, and enlisted the interest of Dow Corning Corp . . of Midland, Michigan, who had provided ma terials for molding artifacts on the old ships. In March 1978 the film crew set off to join the NMHS crew in the Falklands. &quot;It was an incredible sometimes eerie experience,&quot; reports Keith Critchlow, in charge of the filming. &quot;The Islands are lashed by gale winds and rains, it&#39;s a small close society down there. You&#39;d SEA HISTORY, SUMMER 1979

gather around a fire in the evening at the Upland Goose, talking with expedition members and listening to Island memories . Then it&#39;s up at daybreak to spend a day on a vessel like the Charles Cooper, with her anchors out as she&#39;d dropped them a hundred years ago, never to sail again. There were ghosts there, all right! You could feel the excitement in Throckmorton, a man whose lived with these ships and their vanished crews .&quot; Looking at the film that came back from the Islands, Throckmorton, Critchlow and Donaldson realized that what they had was more than the story of a dedicated man expressing a passionate interest in what the Cape Horn sailors left behind before they departed this earth. They knew now that they had to go further-that what they had captured in these lonely wrecks was at the heart of a greater story. From one source and another, further funds were found. The crew traveled to San Francisco, to interview Karl Kortum, vice president of NMHS and dean of the ship-saving community in our time. He threw open the files of the National Maritime Museum at San Francisco, the world&#39;s leading repository of Cape Horn sailing lore, and led them on to interview Captain Fred Klebingat, who came to this country first in the German bark Anna in 1905 (SH 6). They met with Captain Irving Johnson, who told of his voyage round Cape Horn fifty years ago in the four-masted bark PekinR-and who provided footage from his unique film of that historic passage. They went on to England, and met Frank Carr, Chairman of the World Ship Trust Project and savior with Prince Philip of earth&#39;s last clipper ship, the Cutty Sark. They met Alan Villiers in his Oxford retreat, and by him were invited to dig out of a hiding place in the garden the precious nitrate film of his Cape Horn passages_

&quot;We began to feel, understand,&quot; says Do~aldson, &quot;that we were traveling in very special company. All these people knew each other, worked with each other in a shared heritage. I think they feel closer to each other then they do to people they see every day. You talk to Captain Klebingat, and hear him tell how men were drowned on deck driving these great ships through heavy seas, or how he fell from aloft in exhaustion in a gale, and was laid out for dead in the forecastle. You&#39;ll hear him say that in the film . &quot;We began to understand something else . You in the National Maritime Historical Society and the World Ship Trust Committee have a special responsibility. You&#39;re charged with an epochal experience of man , something for the ages, something he can&#39;t ever, ever afford to lose or forget, or he &#39; ll be infinitely the poorer. This was man growing up, taking on his world whole, which is most ly ocean. Now we share that responsibility . We&#39;ve seen the Charles Cooper, seen the Snow Squall&#39;s bow still facing the sea, and the Vicar of Bray dreamin g away th e decades since she sailed to help found the city of San Francisco.&quot; It&#39;s my job to make notes. I have pages of them, my hand is worn out. I am hearing our story. It is time to go downstairs to meet Bob Bott of Dow Corning, the sponsors of &quot;Ghosts of Cape Horn .&quot; Bott is full of encouragement, right on top of the story, aware of the difficulties, makin g suggestions, pushing things forward-not always uncritically. &quot; I thmk you &#39; re wrong if you think Midland, Michigan is a long way from the sea,&quot; he says. &quot;My work, Dow Corning&#39; s work is all leaning toward the future, that&#39;s how we make things go. But we go better when we know where we came from . We came from this hard Cape Horn sailing. It belongs to all Americans.&quot; PS