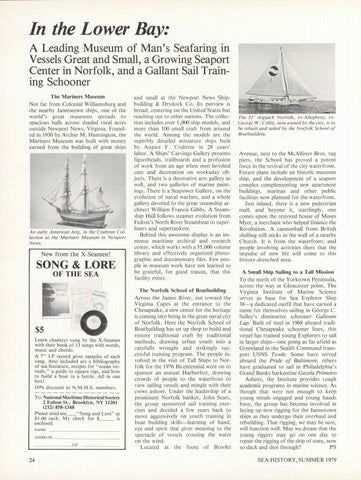 In the Lower Bay: A Leading Museum of Man&#39;s Seafaring in Vessels Great and Small, a Growing Seaport Center in Norfolk, and a Gallant Sail Training Schooner The Mariners Museum Not far from Colonial Williamsburg and the nearby Jamestown ships, one of the world&#39;s great museums spreads its spacious halls across shaded rural acres outside Newport News, Virginia. Founded in 1930 by Archer M. Huntington, the Mariners Museum was built with money earned from the building of great ships

An early American brig, in the Crabtree Collection at the Mariners Museum in Newport News.

SONG &amp; LORE OF THE SEA

and small at the Newport News Shipbuilding &amp; Drydock Co. Its purview is broad, centering on the United States but reaching out to other nations. The collection includes over 1,000 ship models, and more than 100 small craft from around the world . Among the models are the superbly detailed miniature ships built by August F. Crabtree in 28 years&#39; labor. A Ships&#39; Carvings Ga llery presents figureheads, trailboards and a profusion of work from an age when men lavished care and decoration on workaday objects. There is a decorative arts gallery as well, and two galleries of marine paintings. There is a Seapower Gallery, on the evolution of naval warfare, and a whole gallery devoted to the great steamship architect William Francis Gibbs. A Steamship Hall follows steamer evolution from Fulton&#39;s North River Steamboat to superliners and supertankers. Behind this awesome display is an immense maritime archival and research center, which works with a 55,000 vo lume library and effectively organized photographic and documentary files. Few people in museum work have not learned to be grateful, for good reason, that thi s facility exists.

The Norfolk School of Boatbuilding Across the James River , out toward the Virginia Capes at the entrance to the Chesapeake, a new center for the heritage is coming into being in the great naval city of Norfolk . Here the Norfolk School of Boatbuilding has set up shop to build and restore traditional craft by traditional methods, drawing urban youth into a carefully wrought and strikingly successful training program. The people involved in the visit of Tall Ships to Norfolk for the 1976 Bicentennial went on to sponsor an annual Harborfest, drawing crowds of people to the waterfront to view sailing vessels and mingle with their crews ashore. Under the leadership of a prominent Norfolk banker, John Sears, the group sponso red sail training exercises and decided a few years back to move aggressively on youth training in boat building skills-learning of hand, eye and spirit that gives meaning to the spectacle of vessels crossing the water on the wind. Located at the Foote of Brooke

The 51&#39; skipjack Norfolk, ex-A ll egheny, exGeorge W. Colli e, now owned by the city, is to be rebuilt and sailed by the No1j(1lk School of Boatbuildinf!..

Avenue, next to the McAllister Bros. tu g piers, the School has proved a potent force in the revival of the city waterfront. Future plans include an hi storic museum ship, and the development of a seaport complex complementing new apartment buildings, marinas and other public faci lities now planned for the waterfront. Just inland, there is a new pedestrian mall, and beyone it, startlingly, o ne comes upon the restored house of Moses Myer, a merchant who helped finance the Revolution . A cannonball from British shelling still sti cks in the wall of a nearby Church. It is from the waterfront, and people involving act ivities there that the impulse of new life will come to this hi story-drenched area.

A Small Ship Sailing to a Tall Mission To the north of the Yorktown Peninsula, across the way at Gloucester point, The Virginia Institute of Marine Science serves as base for Sea Explorer Ship 38-a dedicated outfil that have earned a name for them selves sailing in George C. Salley&#39;s diminutive schooner Galleons Lap. Built of steel in 1968 aboard traditional Chesapeake schooner lines, this vessel has trained young Explorers to sai l in larger ships-one going as far afield as Greenland in the Sealift Command transport USNS Towle. Some have served aboard the Pride of Baltimore, others have graduated to sail in Philadelphia&#39; s Grand Banks barkentine Gaze/a Primeiro. Ashore, the Institute provides tough academic programs in marine science. As though that were not enough to keep young minds engaged and young hands busy, the group has become in vo lved in laying up new rigging for the Jamestown ships as they undergo their overhaul and rebuilding. That rigging, we may be sure, will function well. May we dream that the young riggers may go on one day to repair the rigging of the ship of state, now so slack and shot through? PS SEA HISTORY, SUMMER 1979