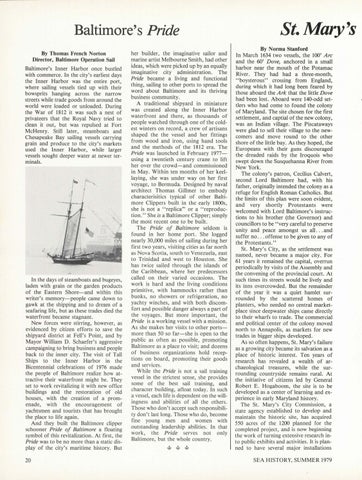 Baltimore's Inner Harbor once bustled with commerce. In the city's earliest days the Inner Harbor was the entire port, where sailing vessels -tied up with their bowsprits hanging across the narrow streets while trade goods from around the world were loaded or unloaded. During the War of 1812 it was such a nest of privateers that the Royal Navy tried to clean it out, but was repulsed at Fort McHenry. Still later, steamboats and Chesapeake Bay sailing vessels carrying grain and produce to the city's markets used the Inner Harbor, while larger vessels sought deeper water at newer terminals.

In the days of steamboats and bugeyes, laden with grain or the garden products of the Eastern Shore-and within this writer's memory-people came down to gawk at the shipping and to dreai_n of a seafaring life, but as these trades died the waterfront became stagnant. New forces were stirring, however, as evidenced by citizen efforts to save the shipyard district at Fell's Point, and _by Mayor William D. Schaefer's aggressive campaigning to bring business and people back to the inner city. The visit of Tall Ships to the Inner Harbor in the Bicentennial celebrations of 1976 made the people of Baltimore realize how attractive their waterfront might be. They set to work revitalizing it with new office buildings and the restoration of old houses, with the creation of a promenade, with the encouragement of yachtsmen and tourists that has brought the place to life again. And they built the Baltimore clipper schooner Pride of Baltimore a floating symbol of this revitalization. At first, the Pride was to be no more than a static display of the city's maritime history. But 20

her builder, the imaginative sailor and marine artist Melbourne Smith, had other ideas, which were picked up by an equally imaginative city administration. . The Pride became a living and funct10nal thino sailing to other ports to spread the word' about Baltimore and its thriving business community. A traditional shipyard in miniature was created along the Inner Harbor waterfront and there, as thousands of people watched through one of the 7oldest winters on record, a crew of artisans shaped the the vessel and her fittings from wood and iron, using hand tools and the methods of the 1812 era. The Pride was launched in February 1977using a twentieth century crane to lift her over the crowd-and commissioned in May. Within ten months of her k~elÂ­ laying, she was under way on her fmt Âˇvoyage, to Bermuda. Designed by naval architect Thomas Gillmer to embody characterisitics typical of other Baltimore Clippers built in the early 1800s, she is not a "replica" or a "reproduction." She is a Baltimore Clipper; simply the most recent one to be built. The Pride of Baltimore seldom is found in her home port. She logged nearly 30,000 miles of sailing during her first two years, visiting cities as far north as Nova Scotia, south to Venezuela, east to Trinidad and west to Houston . .She has twice sailed through the islands of the Caribbean, where her predecessors called on their varied occasions. The work is hard and the living conditions primitive, with hammocks rather than bunks, no showers or refrigeration, no yachty winches, and with both discomfort and possible danger always a part of the voyages. But more important, the Pride is a working vessel with a mission. As she makes her visits to other portsmore than 50 so far-she is open to the public as often as possible, promoting Baltimore as a place to visit; and dozens of business organizations hold receptions on board, promoting their goods and services. While the Pride is not a sail training vessel in the strictest sense, she provides some of the best sail training, and character building, afloat today. In such a vessel, each life is dependent on the willingness and abilities of all the others. Those who don't accept such responsibility don't last long. Those who do, becoi_ne fine young men and women with outstanding leadership abilities. In that work, the Pride serves not only Baltimore, but the whole country.

St.Mary's By Norma Stanford In March 1634 two vessels, the 100' Arc and the 60' Dove, anchored in a small harbor near the mouth of the Potamac River. They had had a three-month, "boysterous" crossing from England, during which it had long been feared by those aboard the Ark that the little Dove had been lost. Aboard were 140-odd settlers who had come to found the colony of Maryland. The site chosen for the first settlement, and captial of the new colony, was an Indian village. The Piscataways were glad to sell their village to the newcomers and move round to the other shore of the little bay. As they hoped, the Europeans with their guns discouraged the dreaded raids by the Iroquois who swept down the Susquehanna River from New York. The colony's patron, Cecilius Calvert, second Lord Baltimore had, with his father, originally intended the col~ny as a refuge for English Roman Catholic~. But the limits of this plan were soon evident, and very shortly Protestants were welcomed with Lord Baltimore's instructions to his brother (the Governor) and councillors to be "very careful to preserve unity and peace amongst us all . . . and suffer no ... offense to be given to any of the Protestants." St. Mary's City, as the settlement was named, never became a major city. For 61 years it remained the capital, overrun periodically by visits of the Assembly and the convening of the provincial court. At such times its streets would be lively and its inns overcrowded. But the remainder of the year it was a quiet hamlet surrounded by the scattere.d homes of planters, who needed no central marketplace since deepwater ships came direc~ly to their wharfs to trade. The commercial and political center of the colony moved north to Annapolis, as markets for new trades in bigger ships developed. Âˇ As so often happens, St. Mary's failure as a growing city became its salvation as a place of historic interest. Ten years of research has revealed a wealth of archaeological treasures, while the surrounding countryside remains rural. At the initiative of citizens led by General Robert E. Hogaboom, the site is to be developed as a center of learning and experience in early Maryland hist~ry: The St. Mary's City Comm1ss1on, a state agency established to develop ~nd maintain the historic site, has acqmred 550 acres of the 1200 planned for the completed project, and is now beginning the work of turning extensive research into public exhibits and activities. It is planned to have several major installations