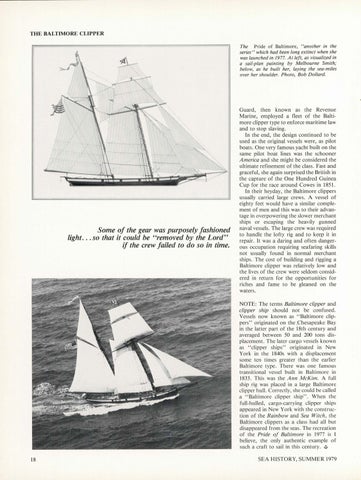 THE BALTIMORE CLIPPER The Pride of Baltimore, &quot;another in the series&quot; which had been long extinct when she was launched in 1977. At left, as visualized in a sail-plan painting by Melbourne Smith; below, as he built her, laying the sea-miles over her shoulder. Photo, Bob Dollard.

Some of the gear was purposely fashioned light . .. so that it could be &quot;removed by the Lord&quot; if the crew failed to do so in time.

Guard, then known as the Revenue Marine, employed a fleet of the Baltimore clipper type to enforce maritime law and to stop slaving. In the end, the design continued to be used as the original vessels were, as pilot boats. One very famous yacht built on the same pilot boat lines was the schooner America and she might be considered the ultimate refinement of the class. Fast and graceful, she again surprised the British in the capture of the One Hundred Guinea Cup for the race around Cowes in 1851. In their heyday, the Baltimore clippers usually carried large crews. A vessel of eighty feet would have a similar complement of men and this was to their advantage in overpowering the slower merchant ships or escaping the heavily gunned naval vessels. The large crew was required to handle the lofty rig and to keep it in repair. It was a daring and often dangerous occupation requiring seafaring skills not usually found in normal merchant ships. The cost of building and rigging a Baltimore clipper was relatively low and the lives of the crew were seldom considered in return for the opportunities for riches and fame to be gleaned on the waters. NOTE: The terms Baltimore clipper and clipper ship should not be confused. Vessels now known as &quot;Baltimore clippers&quot; originated on the .Chesapeake Bay in the latter part of the 18th century and averaged between 50 and 200 tons displacement. The later cargo vessels known as &quot;clipper ships&quot; originated in New York in the 1840s with a displacement some ten times greater than the earlier Baltimore type. There was one famous transitional vessel built in Baltimore in 1833. This was the Ann McKim. A full ship rig was placed in a large Baltimore clipper hull. Correctly, she could be called a &quot;Baltimore clipper ship&quot; . When the full-hulled, cargo-carrying clipper ships appeared in New York with the construction of the Rainbow and Sea Witch, the Baltimore clippers as a class had all but disappeared from the seas . The recreation of the Pride of Baltimore in 1977 is l believe, the only authentic example of such a craft to sail in this century . ..t