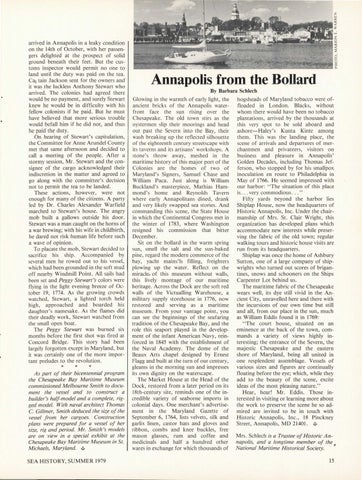 arrived in Annapolis in a leaky condition on the 14th of October, with her passengers delighted at the prospect of solid grou nd beneath their feet. But the customs inspector would permit no one to land until the duty was paid on the tea. Ca1 tain Jackson sent for the owners and it was the luckless Anthony Stewart who arrived. The colonies had agreed there would be no payment, and surely Stewart knew he would be in difficulty with his fellow colonists if he paid. But he must have believed that more serious trouble would befall him if he did not, and thus he paid the duty. On hearing of Stewart's capitulation, the Committee for Anne Arundel County met that same afternoon and decided to call a meeting of the people. After a stormy session, Mr. Stewart and the consignee of the cargo acknowledged their indiscretion in the matter and agreed to go along with the committee's decision not to permit the tea to be landed . These actions, however, were not enough for many of the citizens. A party led by Dr. Charles Alexander Warfield marched to Stewart's house. The angry mob built a gallows outside his door. Stewart was a man caught on the horns of a war brewing; with his wife in childbirth, he dared not risk human life before such a wave of opinion . To placate the mob, Stewart decided to sacrifice his ship. Accompanied by several men he rowed out to his vessel, which had been gro unded in the soft mud off nearby Windmill Point. All sails had been set and Peggy Stewart's colors were flying in the light evening breeze of October 19, 1774. As the growing crowds watched, Stewart, a lighted torch held hi gh, approached and boarded his daughter's namesake. As the flames did their deadly work, Stewart watched from the small open boat. The Peggy Stewart was burned six months before the first shot was fired at Concord Bridge. This story had been largely forgotten except in Maryland, but it was certain ly one of the more important preludes to the revolution.

As part of their bicentennial program the Chesapeake Bay Maritime Museum commissioned Melbourne Sm ith to document the vessel and to construct a builder's half-model and a complete, rigged model. With naval architect Thomas C. Gillmer, Smith deduced the size of the vessel from her cargoes. Construction plans were prepared for a vessel of her size, rig and period. Mr. Smith's models are on view in a special exhibit at the Chesapeake Bay Maritime Museum in St. Michaels, Maryland. .t SEA HISTORY, SUMMER 1979

Annapolis from the Bollard By Barbara Schlech Glowing in the warmth of early light, the ancient bricks of the Annapolis waterfront face the sun rising over the Chesapeake. The old town stirs as the oystermen slip their moorings and head out past the Severn into the Bay, their wash breaking up the reflected silhouette of the eighteenth century streetscape with its taverns and its artisans' workshops. A stone's throw away, meshed in the maritime history of this major port of the Colonies are the homes of two of Maryland's Signers, Samuel Chase and William Paca. Just along is William Buckland's masterpiece, Mathias Hammond's home and Reynolds Tavern where early Annapolitans dined, drank and very likely swapped sea stories. And commanding this scene, the State House in which the Continental Congress met in the winter of 1783, where Washington resigned his commission that bitter December. Sit on the bollard in the warm spring sun, smell the salt and the sun-baked pine, regard the modern commerce of the bay, yacht mains'ls filling, freighters plowing up the water. Reflect on the miracle. of this museum without walls, this lively montage of our maritime heritage. Across the Dock are the soft red walls of the Victualling Warehouse, a military supply storehouse in 1776, now restored and serving as a maritime museum. From your vantage point, you can see the beginnings of the seafaring tradition of the Chesapeake Bay, and the role this seaport played in the development of the infant American Navy, reinforced in 1845 with the establishment of the Naval Academy. The dome of the Beaux Arts chapel designed by Ernest Flagg and built at the turn of our century, gleams in the morning sun and impresses its own dignity on the waterscape. The Market House at the Head of the Dock, restored from a later period on its 18th-century site, reminds one of the incredible variety of seaborne imports in colonial days. One merchant's advertisement in the Maryland Gazette of September 6, 1764, lists velvets, silk and garlix linen, castor hats and gloves and ribbon, combs and knee buckles, free mason glasses, rum and coffee and medicinals and half a hundred other wares in exchange for which thousands of

hogsheads of Maryland tobacco were offloaded in London. Blacks, without whom there would have been no tobacco plantations, arrived by the thousands at this very spot to be sold aboard and ashore-Haley's Kunta Kinte among them. This was the landing place, the scene of arrivals and departures of merchantmen and privateers, visitors on business and pleasure in Annapolis' Golden D~cades, including Thomas Jefferson, who stopped by for his smallpox inoculation en route to Philadelphia in May of 1766. He seemed impressed with our harbor: "The situation of this place is ... very commodious ... " Fifty yards beyond the harbor lies Shiplap House, now the headquarters of Historic Annapolis, Inc. Under the chairmanship of Mrs. St. Clair Wright, this organization has developed plans which accommodate new interests while preserving the fabric of the old town; regular walking tours and historic house visits are run from its headquarters. Shiplap was once the home of Ashbury Sutton, one of a large company of shipwrights who turned out scores of brigantines, snows and schooners on the Ships Carpenter Lot behind us. The maritime fabric of the Chesapeake wears well, its dye still vivid in the Ancient City, unravelled here and there with the incursions of our own time but still and all , from our place in the sun, much as William Eddis found it in 1769: "The court house, situated on an eminence at the back of the town, commands a variety of views highly interesting; the entrance of the Severn, the majestic Chesapeake and the eastern shore of Maryland, being all united in one resplendent assemblage. Vessels of various sizes and figures are continually floating before the eye; which, while they add to the beauty of the scene, excite ideas of the most pleasing nature." Hear, hear! Mr. Eddis. Those interested in visiting or learning more about the work to preserve the scene he so admired are invited to be in touch with Historic Annapolis, Inc., 18 Pinckney Street, Annapolis, MD 2 1401. .t Mrs. Schlech is a Trustee of Historic Annapolis, and a longtime member of the, National Maritime Historical Society. 15