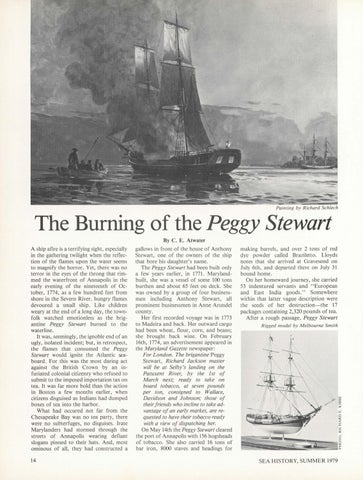 The Burning of the Peggy Stewart By C. E. Atwater A ship afire is a terrifying sight, especially in the gathering twilight when the reflection of the flames upon the water seems to magnify the horror. Yet, there was no terror in the eyes of the throng that rimmed the waterfront of Annapolis in the early evening of the nineteenth of October, 1774, as a few hundred feet from shore in the Severn River, hungry flames devoured a small ship. Like children weary at the end of a long day, the townfolk watched emotionless as the brigantine Peggy Stewart burned to the waterline. It was, seemingly, the ignoble end of an ugly, isolated incident; but, in retrospect, the flames that consumed the Peggy Stewart would ignite the Atlantic seaboard. For this was the most daring act against the British Crown by an infuriated colonial citizenry who refused to submit to the imposed importation tax on tea. It was far more bold than the action in Boston a few months earlier, when citizens disguised as Indians had dumped boxes of tea into the harbor. What had occured not far from the Chesapeake Bay was no tea party, there were no subterfuges, no disguises. Irate Marylanders had stormed through the streets of Annapolis wearing defiant slogans pinned to their hats. And, most ominous of all, they had constructed a 14

gallows in front of the house of Anthony Stewart, one of the owners of the ship that bore his daughter&#39;s name. The Peggy Stewart had been built only a few years earlier, in 1771. Marylandbuilt, she was a vessel of some 100 tons burthen and about 65 feet on deck . She was owned by a group of four businessmen including Anthony Stewart, all prominent businessmen in Anne Arundel county. Her first recorded voyage was in 1773 to Madeira and back . Her outward cargo had been wheat, flour, corn, and beans; she brought back wine. On February 16th, 1774, an advertisement appeared in the Maryland Gazette newspaper: For London. The brigantine Peggy Stewart, Richard Jackson master will be at Selby&#39;s landing on the Patuxent River, by the 1st of March next; ready to take on board tobacco, at seven pounds per ton, consigned to Wallace, Davidson and Johnson; those of their friends who incline to take advantage of an early market, are requested to have their tobacco ready with a view of dispatching her. On May 14th the Peggy Stewart cleared the port of Annapolis with 156 hogsheads of tobacco. She also carried 16 tons of bar iron, 8000 staves and headings for

making barrels, and over 2 tons of red dye powder called Braziletto. Lloyds notes that she arrived at Gravesend on July 6th, and departed there on July 31 bound home. On her homeward journey, she carried 53 indentured servants and &quot;European and East India goods.&quot; Somewhere within that latter vague description were the seeds of her destruction-the 17 packages containing 2,320 pounds of tea. After a rough passage, Peggy Stewart Rigged model by Melbourne Smith