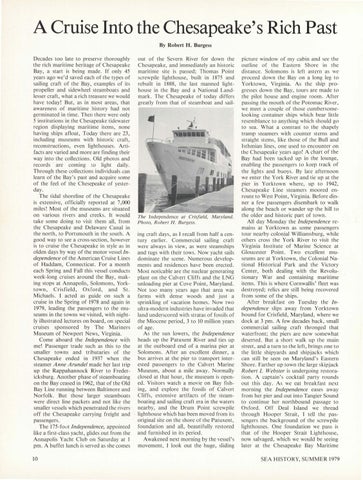 A Cruise Into the Chesapeake&#39;s Rich Past By Robert H. Burgess Decades too late to preserve thoroughly the rich maritime heritage of Chesapeake Bay, a start is being made. If only 45 years ago we&#39;d saved each of the types of sailing craft of the Bay, examples of its propeller and sidewheel steamboats and lesser craft, what a rich treasure we would have today! But, as in most areas, that awareness of maritime history had not germinated in time . Then there were only 5 inst itutions in the Chesapeake tidewater region displaying maritime items, none having ships afloat, Today there are 23, including museums with historic craft, reconstructions, even lighthouses. Artifacts are varied and more are finding their way into the collections. Old photos and records are coming to light daily. Through these collections individuals can learn of the Bay&#39;s past and acquire so me of the feel of the Chesepeake of yesterday. The tidal shoreline of the Chesapeake is extensive, officially reported at 7 ,000 miles! Most of the museums are situated on various rivers and creeks. It would take some doing to visit them all, from the Chesapeake and Delaware Canal in the north, to Portsmouth in the so uth. A good way to see a cross-section, however is to cruise the Chesapeake in style as in olden days by way of the motor vessel Independence of the American Cruise Lines of Haddam, Connecticut. For a month each Spring and Fall this vessel conducts week-long cruises around the Bay, making stops at Annapolis, Solomons, Yorktown, Crisfield, Oxford, and St. Michaels. I acted as guide on such a cruise in the Spring of 1978 and again in 1979, leading the passe ngers to the museums in the towns we visited, with nightly illustrated lectures on board, on special cruises sponsored by The Mariners Museum of Newport News, Virginia. Come aboard the Independence with me! Passenger trade such as this to the smaller towns and tributaries of the Chesapeake ended in 1937 when the steamer Anne Arundel made her last trip up the Rappahannock River to Fredericksburg. Another phase of steamboating on the Bay ceased in 1962, that of the Old Bay Line running between Baltimore and Norfolk . But those larger steamboats were direct line packets and not lik e the smaller vessels which penetrated the rivers off the Chesapeake carrying freight and passengers. The 175-foot Independence, appointed like a first-class yacht, glides out from the Annapolis Yacht C lub on Saturday at I pm. A buffet lunch is served as she comes 10

out of the Severn River for down the Chesapeake, and immediately an historic maritime site is passed; Thomas Point screwpile lighthouse, built in 1875 and rebuilt in 1888, the last manned lighthouse in the Bay and a National Landmark. The Chesapeake of today differs greatly from that of steamboat and sail-

ing craft days, as I recall from half a century earlier. Commercial sailing craft were always in view, as were steamships and tugs with their tows. Now yacht sails domin a te the scene. Numerous developments and residences have been erected. Most noticable are the nuclear generating plant on the Calvert Cliffs and the LNG unloading pier at Cove Point, Maryland . Not too many years ago that area was farms with dense woods and just a sprink ling of vacation homes. Now two ultra-modern industries have invaded that land undersco red with stratas of fossils of the Miocene period, 3 to 10 million years of age. As the sun lowers, the Independence heads up the Patuxent River and ties up at the outboard end of a marina pier at Solomons. After an excellent dinner, a bus arrives at the pier to transport interested passengers to the Calvert Marine Museum, about a mile away. Normally closed at that hour, the museum is opened. Visitors watch a movie on Bay fishing, and explore the fossils of Calvert Cliffs, extensive artifacts of the steamboating and sailing craft era in the waters nearby, and the Drum Point screwpile lighthouse which has been moved from its original site on the shore or the Patuxent, foundation and all, beautifully resto red and furni shed in its period. Awakened next morning by the vessel&#39;s movement, I look out the huge, sliding

picture window of my cabin and see the outline of the Eastern Shore in the distance . Solomons is left astern as we proceed down the Bay on a long leg to Yorktown, Virginia. As th e ship progresses down the Bay, tours are made to the pilot house and engine room. After passing the mouth of the Potomac River, we meet a couple of those cumbersomelooking container ships which bear little resemblance to anything which should go to sea. What a contrast to the shapely tramp steamers with counter sterns a nd straight stem s, like those of the Bull and Isthmian lines, one used to encounter on the Chesapeake years ago! A chart of the Bay had been tacked up in the lounge, enabling the passengers to keep track of the lights and buoys. By late afternoon we enter the York River and tie up at the pier in Yorktown where, up to 1942, Chesapeake Line steamers moored enroute to West Point, Virginia. Before dinner a few passengers disembark to wa lk alo ng the beach or wander up the hill to the older and historic part of town. All day Monday the Independence remains at York town as some passengers tour nearby colonial Williamsburg, whi le others cross the York River to visit the Virginia Institute of Marine Science at Gloucester Point. Two excellent museums are at Yorktown, the Colonial National Historical Park a nd the Victory Center, both dealing with the Revolutionary War and contain ing maritime items. This is where Cornwallis&#39; fleet was destroyed; relics are still being recovered from some of the ships. After breakfast on Tuesday the Independence slips away from Yorktown bound for Crisfield, Maryland, where we dock at 3 pm. A few decades back, small commercial sailing craft thronged that waterfront; the piers are now so mewhat deserted. But a short walk up the main street, and a turn to the left, brings one to the little shipyards and shipjacks which can still be seen on Maryland&#39; s Eastern Shore. Farther up town the large sk ipj ack Robert L Webster is undergoing restoration. A captain&#39;s cocktail party rounds out this day. As we eat breakfast next morning the Independence eases away from her pier and out into Tangier Sound to continue her northbound passage to Oxford. Off Deal Island we thread through Hooper Strait, I tell the passe ngers the background of the screwpile lighthouses. One foundation we pass is that of the Hooper Strait Lighthouse, now salvaged, which we would be seeing later at the Chesapeake Bay Maritime SEA HISTORY, SUMMER 1979