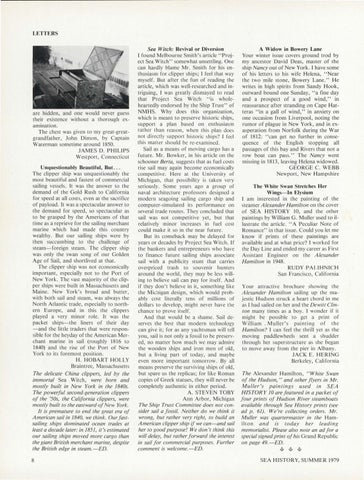 are hidden, a nd one would never guess their existence without a thorough exa minatio n. The chest was given to my great-grea tgrandfather, J ohn Dimo n, by Ca ptai n Waterma n so metim e around 1850. JAMES D. PHILIPS Westport, Co nnecticut Unquestionably Beautiful, But. .. The clipper ship was unquest iona bl y the most beautiful a nd fastest of commercia l sailing vessels. It was the a nswer to th e demand of th e Gold Ru sh to California for speed at a ll costs, eve n a t the sacrifice of payload. It was a spectacul ar answe r to the dema nd for speed , so spectacular as to be gras ped by the Americans of th a t tim e as a reprieve for the sailing merc ha nt marine which had made this country wealthy. But o ur sailing ships were by then succ umbing to the cha llenge of steam-foreign steam . The clipper ship was on ly the swan song of our Golden Age of Sail, and shortlived at that. The clipper ship was not eco nomi call y importa nt , especially not to th e Port of New York. The vast majority o f th e clipper ships were built in Massac husetts and Maine. New York&#39;s bread and butter, with both sail and steam, was always the North Atlantic trad e, especiall y to northern E urope, a nd in this the clippers played a very minor ro le. It was th e packet ships-the liners of their d ay -and th e little traders that were responsi ble for th e heyday of th e American Merchant marine in sail (roughly 1816 to 1840) a nd th e rise of the Port of New York to its fore most position. H. HOBART HOLLY Braintree, Massachusetts

The delicate China clippers, led by the immortal Sea . Witch , were born and mostly built in New York in the 1840s. The powerful second-generation clippers of the &#39;50s, the California clippers, were mostly built to the eastward of New York. It is premature to end the great era of American sail in 1840, we think. Our fastsailing ships dominated ocean trades at least a decade later: in 185 1, it&#39;s estimated our sailing ships moved more cargo than the giant British merchant marine, despite the British edge in steam. -ED. 8

Sea Witch: Revival or Diversion I found Melbourne Smith&#39;s a rticle &quot; Project Sea Witch&quot; so mew ha t unsettling. One can hardl y bla me Mr. Smith for his enthusiasm for clipper ships; I feel that way myself. But after th e fun of reading th e article, which was well-researched a nd intriguing, I was great ly dismayed to read that Proj ec t Sea Witch &quot; is wholehea rtedly endorsed by the Ship Trust&quot; of NMHS. Why does this organization, which is mea nt to preserve historic ships, support a plan based on enthusiasm rather th a n reaso n, when this plan does not directl y sup por t historic ships? I feel this matter sho uld be re-exa mined . Sail as a mea ns of moving cargo has a future. Mr . Bowke r, in his a rticle o n th e sc hooner Berta, suggests th a t as fu el costs rise sail may again beco me eco nomicall y competiti ve. Here a t the Universit y of Michiga n, th a t possibility is ta ken very seriously. Some yea rs ago a gro up of naval architecture professors designed a modern seagoing sailing ca rgo ship a nd computer-simula ted its performance on several trade routes. They co ncluded that sail was no t co mpetitive yet, but tha t relatively min o r increases in fu el cos t could mak e it so in the near future. But its co meback may be delayed for years or decades by Proj ect Sea Witch. If the bankers and entrepreneurs who have to finan ce future sailing ships associate sail with a publicity stunt th a t ca rries overpriced tras h to souve nir hunters around th e world, they may be less willing to believe sail can pay for itself. And if th ey don &#39; t believe in it, so mething li ke th e Michigan desig n, which would proba bl y cos t literall y tens of millions of dollars to develo p, mi ght neve r have th e cha nce to prove itself. And that wo uld be a shame. Sail deserves th e best that mod ern tec hn o logy ca n give it; for as a ny yac ht sman will tell you, sail is not only a fo ssil to be preserved, no ma tter how much we may admire the wooden ships and iron men o f old, but a li ving part o f today, and maybe eve n more important tomorrow. By all means preserve the surviving shi ps of old, but spare us the replicas; for like Ro man copies of G reek sta tues, th ey will never be completely authentic in either period. A. STEVEN TOBY Ann Arbor, Michigan The Ship Trust Committee does not consider sail a fossil. Neither do we think it wrong, but rather very right, to build an A merican clipper ship if we can-and sail her to good purpose! We don&#39;t think this will delay, but rather forward the interest in sail for commercial purposes. Further comment is welcome.-ED.

A Widow in Bowery Lane Your winter iss ue covers ground trod by m y ancestor David Deas, master of the ship Nancy out of New York . I have some of his letters to his wife Helena, &quot;Near th e two mile stone, Bowery Lane.&quot; He writes in high spirits from Sandy Hook , o ut wa rd bound o ne Sunday, &quot;a fine day a nd a prospec t of a good wi nd ,&quot; in reass urance after stranding on Cape Hatteras &quot;in a gall of wind,&quot; in anxiety on one occasion from Liverpool, noting the rumor of plague in New York , and in exas peration from Norfolk durin g the War of 1812: &quot;can get no further in consequ ence of the English stoppin g all passages of this bay and Rivers that no t a row boat can pass.&quot; The Nancy went missing in 1813 , leaving Helena widowed . GEORGE C. WEBB Newport, New H ampshire The White Swan Stretches Her Wings-In Elysium a m interested in the painting of the steamer Alexander Hamilton on th e cover of SEA HISTORY IO, and the ot her paintings by William G. Muller used toillustrate the a rticle. &quot;A Peculiar Note of Romance&quot; in that iss ue. Could yo u let me know if prints or these paintings a re ava ilable and at wha t price? I worked for the Day Line a nd ended my career as First Ass istant Engineer o n the A lexander Hamilton in 1948. RUDY PALIHNI C H San Francisco, Californ ia Your attractive brochure showing th e

A lexander Hamilton sailing up th e majestic Hudso n struck a heart cho rd in me as I had sailed o n her a nd the Dewill Clinton man y tim es as a boy. I wonder if it mi ght be possible to get a print o f William Muller&#39;s painting of th e Hamilton ? I ca n feel the thrill yet as the moving paddlew heels sent a shudd er throu gh her superstructure as she bega n to move away from the pier in Albany. JACK E. H E RING Ber keley, Cali fo rnia

The Alexander Hamilton, &quot;White Swan of the Hudson,&quot; and other flyers in Mr. Muller &#39;s paintin gs used in SEA HISTORY IO are featured in a packet of four prints of Hudson River steamboats available through Sea History prints (see ad p. 61). We&#39;re collecting orders. Mr. Muller was quartermaster in the Ha mil to n and is today her leading memorialist. Please also note an ad for a special signed print of his Grand Rep ublic on page 49. - ED. .t .t .t SEA HISTORY, SUMMER 1979