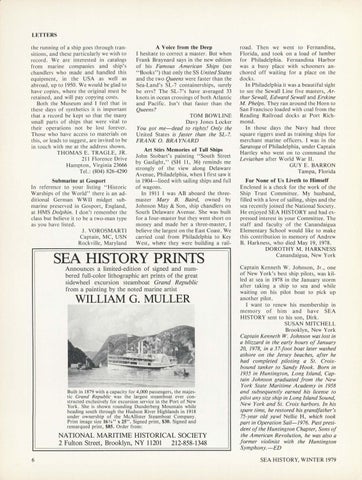 LETTERS the running of a ship goes through transitions, and these particularly we wish to record. We are interested in catalogs from marine companies and ship&#39;s chandlers who made and handled this equipment, in the USA as well as abroad, up to 1950. We would be glad to have copies, where the original must be retained, and will pay copying costs. Both the Museum and I feel that in these days of synthetics it is important that a record be kept so that the many small parts of ships that were vital to their operations not be lost forever. Those who have access to materials on this, or leads to suggest, are invited to be in touch with me at the address shown. THOMAS E. TRAGLE, JR. 211 Florence Drive Hampton, Virginia 23666 Tel.: (804) 826-4290 Submarine at Gosport In reference to your listing &quot;Historic Warships of the Wor ld &quot; there is an additional German WWII midget submarine preserved in Gosport, England, at HMS Dolphin. I don&#39;t remember the class but believe it to be a two-man type as you have listed. J . VOROSMARTI Captain, MC, USN Rockville, Maryland

A Voice from the Deep I hesitate to correct a master. But when Frank Braynard says in the new edition of his Famous American Ships (see &quot;Books&quot;) that only the SS United States and the two Queens were faster than the Sea-Land&#39;s SL-7 containerships, surely he errs? The SL-7&#39;s have averaged 33 knots in ocean crossings of both Atlantic and Pacific . Isn&#39;t that faster than the

You got me-dead to rights! Only the United States is faster than the SL-7.

FRANK 0. BRA YNARD Art Stirs Memories of Tall Ships John Stobart&#39;s painting &quot;South Street by Gaslight,&quot; (SH 11, 36) reminds me strongly of the view a long Delaware Avenue, Philadelphia, when I first saw it in 1904-lined with sailing ships and full of wagons. In 1911 I was AB aboard the threemaster Mary B. Baird, owned by Johnson May &amp; Son, ship chandlers on South Delaware Avenue. She was built for a four-master but they went short on money and made her a three-master, I believe the largest on the East Coast. We carried coal from Philadelphia to Key West, where they were building a rail-

Built in 1879 with a capacity for 4,000 passengers, the majestic Grand Republic was the largest steamboat ever constructed exclusively for excursion service in the Port of New York. She is shown rounding Dunderberg Mountain while heading south through the Hudson River Highlands in 1918 under ownership of the McAllister Steamboat Company. Print image size 16 3/â&amp;#x20AC;˘&quot; x 25&quot;. Signed print, $30. Signed and remarqued print, $85. Order from:

road. Then we went to Fernandina, Florida, and took on a load of lumber for Philadelphia. Fernandina Harbor was a busy place with sc hooners anchored off waiting for a place on the docks . In Philadelphia it was a beautiful sight to see the Sewall Line five masters, Arthur Sewall, Edward Sewall and Erskine M. Phelps. They ran around the Horn to San Francisco loaded with coal from the Reading Railroad dock s at Port Richmond . In those days the Navy had three square riggers used as training ships for . merchant marine officers. I was in the Saratoga of Philadelphia, under Captain Hartley who went on to command the Leviathan after World War II. GUY E. BARRON Tampa, Florida For None of Us Liveth to Himself Enclosed is a check for the work of the Ship Trust Committee. My husband, filled with a love of sailing, ships and the sea recently joined the National Society. He enjoyed SEA HISTORY and had expressed interest in Your Committee. The sta ff and faculty of the Canandaigua Elementary School would like to make this contribution in memory of Andrew B. Harkness, who died May 19, 1978. DOROTHY M. HARKNESS Canandaigua, New York Captain Kenneth W. Johnson, Jr., one of New York&#39;s best ship pilots, was killed at sea in 1978 in the January storm after taking a ship to sea and whi le waiting on his pilot boat to pick up another pilot. I want to renew his membership in memory of him and have SEA HISTORY sent to his son, Dirk. SUSAN MITCHELL Brooklyn, New York

Captain Kenneth W. Johnson was lost in a blizzard in the early hours of January 20, 1978, in a 37-foot boat later washed ashore on the Jersey beaches, after he had completed piloting a St. Croixbound tanker to Sandy Hook. Born in 1935 in Huntington, Long Island, Captain Johnson graduated from the New York State Maritime Academy in 1958 and subsequently earned his license to pilot any size ship in Long Island Sound, New York and St. Croix harbors. Jn his spare time, he restored his grandfather&#39;s 75-year old yawl Nellie H, which took part in Operation Sail-1976. Past president of the Huntington Chapter, Sons of the American Revolution, he was also a former violinist with the Huntington Symphony. -ED SEA HISTORY, WINTER 1979