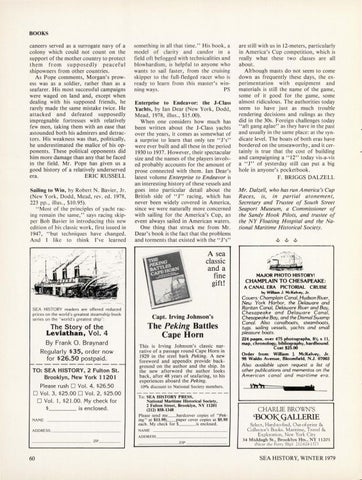 BOOKS caneers served as a surrogate navy of a colony which could not count on the support of the mother country to protect them from supposedly peaceful shipowners from other countries. As Pope comments, Morgan's prowess was as a soldier, rather than as a seafarer. His most successful campaigns were waged on land and, except when dealing with his supposed friends, he rarely made the same mistake twice. He attacked and defeated supposed ly impregnable fortresses with relatively few men, taking them with an ease that astounded both his admirers and detractors. His weak ness was that, politically, he underestimated the malice of his opponents. These political opponents did him more damage than any that he faced in the field. Mr. Pope has given us a good history of a relatively und erserved era. ERIC RUSSELL Sailing to Win, by Robert N. Bavier, Jr. (New York, Dodd, Mead , rev . ed . 1978, 223 pp., illus ., $10.95). "Most of the principles of yacht racing remain the same," says racing skipper Bob Bavier in in trod ucing thi s new ed itio n of his class ic wo rk , first issued in 1947, "but techniques have changed. And I lik e to think I've learned

something in all that time." His book, a model of clarity and candor in a field oft befogged with technicalities and blowhardism, is helpful to anyone who wants to sail faster, from the cruising skipper to the full-fledged racer who is ready to learn from this master' s winning ways . PS Enterprise to Endeavor: the J-Class Yachts, by Ian Dear (New York, Dodd, Mead, 1978, illus., $ 15.00). When one considers how much has been written about the J-Class yachts over the years, it comes as somewhat of a su rprise to learn that o nl y ten "J's" were ever built a nd all these in the period 1930 to 1937. However, th eir spectacular size and th e names of the players involved probably accounts for the amount of prose connected with them. Ian Dear's latest volu me Enterprise to Endeavor is an interesting history of these vessels and goes into particu lar detail abo ut the British side of "J" racing, which has never been widely covered in America, since we were naturally more concerned with sailing for the America's Cup, an event always sailed in American waters . One thing that struck me from Mr. Dear's book is the fact that the problems and torments that existed with the" J's"

A sea classic and a fine gift!

are still with us in 12-meters, particularly in America 's Cup competition , which is really what these two classes are all about. Although masts do not seem to come down as frequent ly these days, the experimentation with equ ipment and materials is sti ll the name of the game, some of it good for the game, some almost ridiculous . The auth orities today seem to have just as much troub le rendering decisions and rulings as they did in the 30s . Foreign challenges today "aft gang aglae" as they have in the past and usually in the same place: at the syndicate level. The boats of both eras have bordered on the unseaworthy, and it certain ly is true that the cost of building and campaigning a " 12" today vis-a-vis a "J" of yesterday still can put a big hole in anyone' s pocketbook. F. BRIGGS DALZELL

Mr. Dalzell, who has run America's Cup Races, is, in partial atonement, Secretary and Trustee of South Street Seaport Museum, a Commissioner of the Sandy Hook Pilots, and trustee of the NY Floating Hospital and t~e National Maritime Historical Society.

The Story of the

The Peking Battles Cape Horn This is Irving Johnson's classic narrative of a passage round Cape Horn in I929 in the steel bark Peking. A new foreword and appendix provide background on the author and the ship. In the new afterword the author looks back, after 48 years of seafaring, to his experiences aboard the Peking. lOOJo discount to National Society members.

Also available upon request a list of other publications and mementos on the American canal and maritime era .