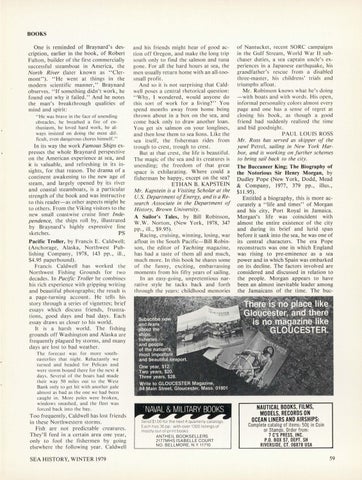 BOOKS One is reminded of Braynard&#39;s description, earlier in the book, of Robert Fu lton, builder of the first commerc ia ll y successfu l steamboat in America, the North River (later known as &quot;Clermont&quot;). &quot;He went at things in the modern scientific manner,&quot; Braynard observes. &quot;If something didn&#39;t work, he found out why it failed.&quot; And he notes the man&#39;s breakthrough qualities of mind and spirit: &quot; He was brave in the face of unendin g obstac les, he breathed a fire of enthusiasm, he loved hard work, he always insisted on doin g the most difficult, even dangerou s chores himself.&quot;

In its way the work Famous Ships expresses the whole Braynard perspective on the American experience at sea, and tt is valuab le, and refreshing in its insights, for that reason . The drama of a continent awakening to the new age of steam, and largely opened by its river and coastal steamboats, is a particular strength of the book and was instructive to this reader-as other aspects might be to others. From the Viking visitors to the new small coastwise cruise liner Independence, the ships roll by, illustrated by Braynard&#39;s highly expressive line sketches . PS Pacific Troller, by Francis E. Caldwell; (Anchorage, Alaska, Northwest Publi sh ing Company, 1978, 143 pp., ill. , $4 .95 paperbound). Francis Caldwell has worked the Northwest Fishing Grounds for two decades. In Pacific Troller he combines his rich experience with gripping writing and beautiful photographs; the result is a page-turning account. He tells his story through a series of vignettes; brief essays which discuss friends, frustrations, good days and bad days. Each essay draws us closer to his world. It is a harsh world. The fishing grounds off Washington and Alaska are frequently plagued by storms, and many days are lost to bad weather.

and his friends might hear of good action off Oregon, and make the long trip sout h only to find the salmon and tuna gone. For all the hard hours at sea, th e men usually return home with an all-toosmall profit. And so it is not surprising that Caldwell poses a central rhetorical question: &quot;Why, I wondered, would anyone do this sort of work for a living?&quot; You spend months away from home being thrown about in a box on the sea, and come back only to draw another loan. You get six salmon on your longlines, and then lose them to sea lions. Like the sea itself, the fi sherman rides from trough to crest, trou gh to crest. But at that crest, th e life is beautiful. The magic of the sea and it s creatures is unending; the freedom of that great space is exhilarating. Where could a fisherman be happy, except on the sea? ETHAN B. KAPSTEIN

Mr. Ross has served as skipper of the yawl Petrel, sailing in New York Harbor, and is working on further schemes to bring sail back to the city.

The Buccaneer King; The Biography of the Notorious Sir Henry Morgan, by Dudley Pope (New York, Dodd, Mead &amp; Company, 1977, 379 pp., illus., Mr. Kapstein is a Visiting Scholar at the $11.95). U.S. Department of Energy, and is a ReEntitled a biography, this is more acsearch Associate in th e Department of curately a &quot;life and times&quot; of Morgan History, Brown University. and his city, Port Royal in Jamaica. A Sailor&#39;s Tales, by Bill Robinson, Morgan&#39;s life was coincident with W.W. Norton, (New York, 1978, 347 almost the entire existence of the city and during its brief and lurid span pp., ill., $9 .95) . Racing, cru ising, winning, losing, war before it sank into the sea, he was one of afloat in the South Pacific-Bill Robin- its central characters. The era Pope so n, the editor of Yachting magazine, reconstructs was one in which England was rising to pre-eminence as a sea has had a taste of them all and much, much more. In this book he shares some power and in which Spain was embarked of the funny, exciting, embarrassing on its decline . The factors involved are considered and discussed in relation to moments from his fifty yea rs of sailing. In an easy-going, unpretentious nar- Âˇ the people. Morgan appears to have rative style he tacks back and forth been an almost inevitable leader among through the years: chi ldhood memories the Jamaicans of the time. The buc-

The foreca st was for more southeaste rli es that ni ght. Reluctantl y we turned a nd headed for Pelican and were storm bound there for the next 4 days. Severa l of th e boats had made their way 50 mil es out to the West Bank on ly to get hit with another gale almost as bad as the one we had been caught in. More poles were broken, windows smashed, and the fleet was forced back into the bay.

Too frequently, Caldwell has lost friends in these Northwestern storms. Fish a re not predictable creatures. They&#39;ll feed in a certain area one year, only to fool the fishermen by going elsewhere the following year. Ca ldwell

of Nantucket, recent SORC campaigns in the Gulf Stream, World War 11 .subchaser duties, a sea captain uncle&#39;s experiences in a Japanese earthq uake, his grandfather&#39;s rescue from a disabled three-master, his childrens&#39; trials and triumphs afloat. Mr. Robinson knows what he&#39;s doing -wit h boats and with words . His open, informal personality colors almost every page and one has a sense of regret at closing hi s book, as thou gh a go&lt;5d friend had sudd enly realized the tim e and bid goodnigh t . PAUL LOU IS ROSS