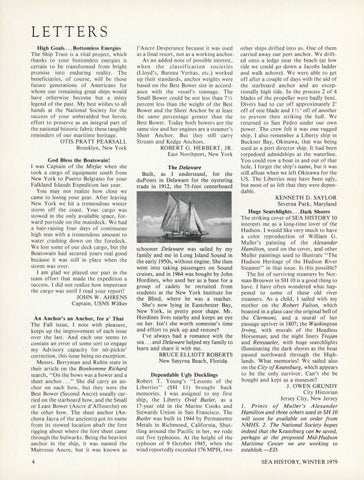 LETTERS High Goals ... Bottomless Energies The Ship Trust is a vital project, which thanks to your bottomless energies is certain to be transformed from bright promise into enduring reality. The beneficiaries, of course, will be those future generations of Americans for whom our remaining great ships would have otherwise become but a misty legend of the past. My best wishes to all hands at the National Society for the success of your unheralded but heroic effort to preserve as an integral part of the national historic fabri c these tangible reminders of our maritime heritage . OTIS PRATT PEARSALL Brooklyn, New York God Bless the Boatswain! was Captain of the Mirfac when she took a cargo of equipment south from New York to Puerto Belgrano for your Falkland Islands Expedition last year. You may not reali ze how close we came to losing your gear. After leaving New York we hit a tremendous winter storm off the coast. Your cargo was stowed in the only available space, forward portside on the maindeck . We had a hair-raising four days of continuous high seas with a tremendous amount to water crashing down on the foredeck. We lost some of our deck cargo, but the Boatswain had secured yours real good because it was still in place when the storm was over . I am glad we played our part in the team effort that made the expedition a success. I did not reali ze how important the cargo was until I read your report! JOHN W. AHRENS Captain, USNS Wilkes An Anchor&#39;s an Anchor, for a&#39; That The Fall issue, I note with pleasure, keeps up the improvement of each issue over the last. And each one seems to contain an error of some sort to engage my Advisory capacity for nit-pickin&#39; correction, this issue being no exception. Messrs . Berryman and Rubin state in their article on the Bonhomme Richard search, &quot;On the bows was a bower and a sheet anchor . .. &quot; She did carry an anchor on each bow, but they were the Best Bower (Second Ancre) usually carried on the starboard bow, and the Small or Least Bower (Ancre d&#39;Affourche) on the other bow. The sheet anchor (Anchora Jacra of the ancients) got its name from its stowed location abaft the fore rigging about where the fore sheet came through the bulwarks : Being the heaviest anchor in the ship, it was named the Maitresse Ancre, but it was known as 4

l&#39; Ancre Desperance because it was used as a final resort, not as a working anchor . As an added note of possible interest, when the classification societies (Lloyd&#39;s, Bureau Veritas, etc.) worked up their standards, anchor weights were based on the Best Bower size in accordance with the vessel&#39;s tonnage. The Small Bower could be not less than 7 !12 percent less than the weight of the Best Bower and the Sheet Anchor be at least the same percentage greater than the Best Bower. Today both bowers are the same size and her engines are a steamer&#39;s Sheet Anchor. But they still carry Stream and Kedge Anchors . ROBERT G . HERBERT, JR. East Northport, New York The Delaware Built, as I understand, for the duPonts in Delaware for the oystering trade in 1912, the 75-foot centerboard

schooner Delaware was sailed by my family and me in Long Island Sound in the early 1950s, without engine. She then went into taking passengers on Sound cruises, and in 1964 was bought by John Hordines, who used her as a base for a group of cadets he recruited from students at the New York Institute for the Blind, where he was a teacher. She&#39;s now lying in Eastchester Bay, New York, in pretty poor shape. Mr. Hordines lives nearby and keeps an eye on her. Isn&#39;t she worth someone&#39;s time and effort to pick up and restore? I&#39;ve always had a romance with the sea ... and Delaware helped my family to learn and share it with me. BRUCE ELLIOTT ROBERTS New Smyrna Beach, Florida Dependable Ugly Ducklings Robert T. Young&#39;s &quot;Lessons of the Liberties&quot; (SH 11) brought back memories. I was assigned to my first ship, the Liberty Ovid Butler, as a 17-year old in the Marine Cooks and Stewards Union in San Francisco. The Butler was built in 1944 by Permanente Metals in Richmond, California, Shuttling around the Pacific in her, we rode out five typhoons. At the height of the typhoon of 9 October 1945, when the wind reportedly exceeded 176 MPH, two

other ships drifted into us. One of them carried away our port anchor. We drifted onto a ledge near the beach (at low tide we could go down a Jacobs ladder and walk ashore) . We were able to get off after a couple of days with the aid of the starboard anchor and an exceptionally high tide. In the process 2 of 4 blades of the propeller were badly bent. Divers had to cut off approximately 2&#39; off of one blade and 1 !12&#39; off of another to prevent their striking the hull. We returned to San Pedro under our own power. The crew felt it was one rugged ship. I also remember a Liberty ship in Buckner Bay, Okinawa, that was being used as a port director ship. It had been torpedoed admidships at the waterline. You could row a boat in and out of that hole. I forget the ship&#39;s name, but it was still afloat when we left Okinawa for the US . The Liberties may have been ugly, but most of us felt that they were dependable . KENNETH D. SAYLOR Severna Park, Maryland Huge Searchlights ... Dark Shores The striking cover of SEA HISTORY 10 interests me as a long-time lover of the Hudson. I would like very much to have a color reproduction of William G. Muller&#39;s painting of the Alexander Hamilton, used on the cover, and other Muller paintings used to illustrate &quot;The Hudson Heritage of the Hudson River Steamer&quot; in that issue. Is this possible? The list of surviving steamers by Norman Brouwer in SH 10 is a good thing to have. I have often wondered what happened to some of these old river steamers . As a child, I sailed with my mother on the Robert Fulton, which boasted in a glass case the original bell of the Clermont, and a mural of her passage upriver in i&#39;807; the Washington Irving, with murals of the Headless Horseman; and the night liners Trojan and Renssae/er, with huge searchlights illuminating the dark shores as the boat passed northward through the Highlands. What memories! We sailed also on the City of Keansburg, which appears to be the only survivor. Can&#39;t she be bought and kept as a museum? J. OWEN GRUNDY City Historian Jersey City, New Jersey

1. Prints of Muller&#39;s Alexander Hamilton and three others used in Si-I 10 will soon be available on order from NMHS. 2. The National Society hopes indeed that the Keansburg can In saved, perhaps at the proposed Mid-Hudson Maritime Âˇ Center we are working to establish. -ED. SEA HISTORY, WINTER 1979