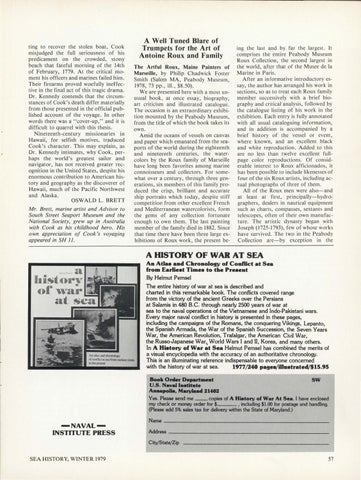 ting to recover the stolen boat, Cook misjudged the full seriousness of his predicament on the crowded, stony beach that fateful morning of the 14th of February, 1779. At the critical moment his officers and marines failed him . Their firearms proved woefully ineffective in the final act of this tragic drama. Dr. Kennedy contends that the circumstances of Cook's death differ materially from those presented in the official published account of the voyage. In other words there was a "cover-up," and it is difficult to quarrel with this thesis. Nineteenth-century missionaries in Hawaii, for selfish motives, traduced Cook's character. This may explain, as Dr. Kennedy intimates, why Cook, perhaps the world's greatest sailor and navigator, has not received greater recognition in the United States, despite his enormous contribution to American history and geography as the discoverer of Hawaii, much of the Pacific Northwest and Alaska. OSWALD L. BRETT

Mr. Brett, marine artist and Advisor to South Street Seaport Museum and the National Society, grew up in Australia with Cook as his childhood hero. His own appreciation of Cook's voyaging appeared in SH 11.

A Well Tuned Blare of Trumpets for the Art of Antoine Roux and Family The Artful Roux, Maine Painters of Marseille, by Philip Chadwick Foster Smith (Salem MA, Peabody Museum, 1978, 73 pp.' ill.' $8.50). We are presented here with a most unusual book, at once essay, biography, art criticism and illustrated catalogue. The occasion is an extraordinary exhibition mounted by the Peabody Museum, from the title of which the book takes its own. Amid the oceans of vessels on canvas and paper which emanated from the seaports of the world during the eighteenth and nineteenth centuries, the watercolors by the Roux family of Marseille have long been favorites among marine connoisseurs and collectors. For somewhat over a century, through three generations, six members of this family produced the crisp, brilliant and accurate ship portraits which today, despite stiff competition from other excellent French and Mediterranean watercolorists, form the gems of any collection fortunate enough to own them. The last painting member of the family died in 1882. Since that time there have been three large exhibitions of Roux work, the present be-

ing the last and by far the largest. It comprises the entire Peabody Museum Roux Collection, the second largest in the world, after that of the Musee de la Marine in Paris. After an informative introductory essay, the author has arranged his work in sections, so as to treat each Roux family member successively with a brief biography and critical analysis, followed by the catalogue listing of his work in the exhibition. Each entry is fully annotated with all usual cataloguing information, and in addition is accompanied by a brief history of the vessel or event, where known, and an excellent black and white reproduction. Added to this are no less than twelve excellent fullpage color reproductions. Of considerable interest to Roux afficionados, it has been possible to include likenesses of four of the six Roux artists, including actual photographs of three of them . All of the Roux men were also-and at least at first, principally-hydrographers, dealers in nautical equipment such as charts, compasses, sextants and telescopes, often of their own manufacture. The artistic dynasty began with Joseph (1725-1793), few of whose works have survived . The two in the Peabody Collection are-by exception in the

A HISTORY OF WAR AT SEA An Atlae and Chronology of Conflict at Sea from Earlieet Tima to the Preeent By Helmut Pemsel The entire history of war at sea is described and charted in this remarkable book. The conflicts covered range from the victory of the ancient Greeks over the Persians at Salamis in 480 B.C. through nearly 2500 years of war at sea to the naval operations of the Vietnamese and Indo-Pakistani wars. Every major naval conflict in history is presented in these pages, including the campaigns of the Romans, the conquering Vikings, Lepanto, the Spanish Armada, the War of the Spanish Succession, the Seven Years War, the American Revolution, Trafalgar, the American Civil War, the Russo-Japanese War, World Wars I and Il, Korea, and many others. In A Hietory of War at Sea Helmut Pemsel has combined the merits of a visual encyclopedia with the accuracy of an authoritative chronology. This is an illuminating reference indispensable to everyone concerned 1977/240 paga/illaetratecl/$15.95 with the history of war at sea.

Book Order Department SW U.S. Naval lnâ&#x20AC;˘titate Aaaapolie, Maryland 21402 Yes. Please send me _ _ copies of A Hietory of War Ats-. I have enclosed my check or money order for $ , including $1.00 for postage and handling. (Please add 5% sales tax for delivery within the State of Maryland.)