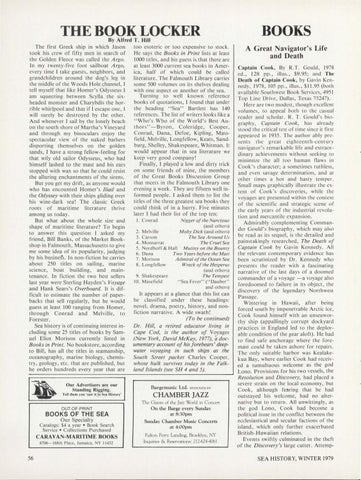 The first Greek ship in which Jason took his crew of fifty men in sea rch of the Golden Fleece was called the Argo. In my twenty-five foot sailboat Argo, every time I take guests, neighbors, and gra ndchildren around the dog!s leg in th e middle of the Woods Hole cha nnel, I tell myself that like Homer' s Odysseus I am squeezing between Scylla the sixheaded monster and Charybdis the horrible whirlpool and that if I escape one, I will surely be destroyed by the other. And whenever I sail by the lonely beach on the so uth shore of Martha's Vineyard and through my binoculars enjoy the s pectacular view of the naked bathers disporting themselves on the golden sands, I have a strong fellow-feeling for that wily old sailor Odysseus, who had himself lashed to the mast and his ears stopped with wax so that he could resist the alluring enchantments of the sirens . But you get my drift, as anyone would who has encounted Homer's Iliad and the Odyssey with their ships gliding over his wine-dark sea! The classic Greek roots of maritime literature thrive among us today. But what about the whole size and shape of maritime literature? To begin to answer this question I asked my friend, Bill Banks, of the Market Bookshop in Falmouth, Massachusetts to give me so me idea of its popularit y, judging by his business . In non-fiction he carries about 250 titles on sailing, marine science, boat building, and maintenance. In fiction the two best sellers last year were Sterling Hayden 's Voyage and Hank Sears's Overboard. It is difficult to estimate the number of paperbacks that sell regularly, but he would guess at least 100 ranging from Homer, through Conrad and Melville, to Forester. Sea history is of continuing interest ineluding some 25 titles of books by Samuel Eliot Morison currently listed in Books in Print. No bookstore, according to Bill, has all the titles in seamanship, oceanography, marine biology, chemistry, geology, etc. that are published, but he orders hundreds every year that are

Our Advertisers are our Standing Rigging. Tell 1hem you ·sa w ii in Sea History '

too esoteric or too expensive to stock. He says the Books in Print lists at least 1000 titles, and his g uess is that there are at least 3000 current sea books in America, half of which could be called literature. The Falmouth Library carries some 500 volumes on its shelves dealing with one aspect or another of the sea. Turning to well known reference books of quotations, I found that under the heading "Sea" Bartlett has 140 references . The list of writers look s like a "Who's Who of the World 's Best Authors"- Byron , Coleridge, Cooper, Conrad, Dana, Defoe, Kipling, Massfield, Melville, Longfellow, Keats, Sandburg, Shelley, Shakespeare, Whitman. It would appear that in sea lit erature we keep very good company! Finally, I played a low and dirty trick on some friends of mine, the members of the Great Books Discussion Group that meets in the Falmouth Library one evening a week. They are fifteen we ll informed people. I asked them to list the titles of the three greatest sea books they could think of in a hurry. Five minutes later I had their list of the top ten: I. Co nrad Nigger of the Narcissus (and others) 2. Melville Moby Dick (and others) 3. Carson The Sea Around Us The Cruel Sea 4 . Monsarrat s. Nordhoff & Hall Mutiny on the Bounty 6. Dana Two Years before the Mast 7. Morison Admiral of the Ocean Sea 8. Longfellow Wreck of the Hesperus (and others) 9. Shakespeare The Tempest 10. Masefield "Sea Fever" ("Dauber" and others) It appears at a glance that this list can be classified under these headings: novel , drama, poetry, history, and nonfiction narrative. A wide swath!

(To be continued) Dr. Hill, a retired educator living in Cape Cod, is the author of Voyages (New York, David McKay, 1977), documentary account of his forebears' deepwater voyaging in such ships as the South Street packet Charles Cooper, whose hulk survives today in the Falkland Islands (see SH 4 and 5).

CHAMBER JAZZ The Giants of the Jazz World in Concert On the Barge every Sunday at 8:30pm Sunday Chamber Music Concerts at 4:00pm Fulton Ferry Landing, Brooklyn, NY Inquiries & Reservations: 212-624-4061

A Great Navigator's Life and Death Captain Cook, By R.T . Gould, 1978 ed., 128 pp., illus., $9.95; and The Death of Captain Cook, by Gavin Ken nedy, 1978, 105 pp., illus., $1 1.95 (both available Southwest Book Services, 495 1 Top Line Drive, Dallas, Texas 75247). Here are two modest, thou g h excellent volumes, to appeal both to th e casual reader and sc holar . R. T. Gould's biograp hy, Captain Cook, ha s already stood the crit ical test of time since it fir st appeared in 1935. The author ably presents the great eighteenth-century navi ga tor's remarkable life and extraordinary achievement s w ith o ut seeking to minimi ze !he a ll too hum an naw s in Cook's character; a sometimes ruthless, and even savage determination, and at other times a hot and hasty temper. Small maps g raphically ii lust rate the extent of Cook's di scove ries, while the voyages are prese nted wit hin the context of th e scient ifi c and strategic scene of the early years of the industrial revolution and mercantile expa nsion . Admirably complement in g Commander Gould's biography, which may also be read as its sequel, is the detailed and painstakingly resea rched, The Death of Captain Cook by Gavin Kennedy . All the relevant contemporary evidence has been sc rutini zed by Dr. Kennedy who presents th e reader with a fascinating narrative of the last days of a doomed commander of a voyage -a voyage also foredoomed to failure in its object, the discovery of the legendary Northwest Passage. Wintering in Hawaii, after being forced south by impenetrable Arctic ice, Cook found himself with an unseaworthy ship (appallingly corrupt dockyard practices in England led to the deplorable condition of the gear aloft) . He had to find safe anchorage where the foremast could be taken ashore for repairs. The only suitable harbor was Kealakekua Bay, where earlier Cook had received a tumultuous welcome as the god Lono . Provisions for his two vessels, the Resolution and Discovery, had placed a severe strain on the local economy, but Cook, although fearing that he had outstayed his welcome, had no alternative but to return. All unwittingly, as the god Lono, Cook had become a political issue in the conflict between the ecclesiasti cal and secular factions of the island, which only further exacerbated British-Hawaiian relations. Events swiftly culminated in the theft of the Discovery's large cutter. AttempSEA HISTORY, WINTER 1979