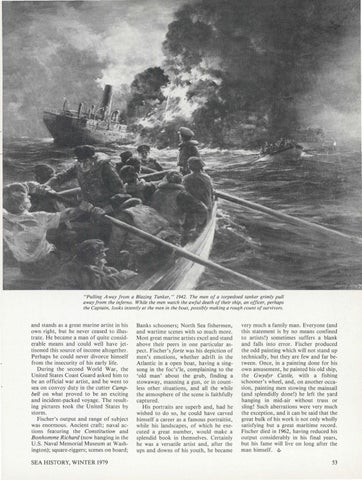 "Pulling A way from a Blazing Tanker," 1942. The men of a torpedoed tanker grimly pull away from the inferno. While the men watch the awful death of their ship, an officer, perhaps the Captain, looks intently at the men in the boat, possibly making a rough count of survivors.

and stands as a great marine artist in his own right, but he never ceased to illustrate. He became a man of quite considerable means and could well have jettisoned this source of income altogether. Perhaps he could never divorce himself from the insecurity of his early life. During the second World War, the United States Coast Guard asked him to be an official war artist, and he went to sea on convoy duty in the cutter Campbell on what proved to be an exciting and incident-packed voyage. The resulting pictures took the United States by storm. Fischer's output and range of subject was enormous. Ancient craft; naval actions featuring the Constitution and Bonhomme Richard (now hanging in the U.S. Naval Memorial Museum at Washington); square-riggers; scenes on board; SEA HISTORY, WINTER 1979

Banks schooners; North Sea fishermen, and wartime scenes with so much more. Most great marine artists excel and stand above their peers in one particular aspect. Fischer's forte was his depiction of men's emotions, whether adrift in the Atlantic in a open boat, having a singsong in the foc's'le, complaining to the 'old man' about the grub, finding a stowaway, manning a gun, or in countless other situations, and all the while the atmosphere of the scene is faithfully captured. His portraits are superb and, had he wished to do so, he could have carved himself a career as a famous portraitist, while his landscapes, of which he executed a great number, would make a splendid book in themselves. Certainly he was a versatile artist and, after the ups and downs of his youth, he became

very much a family man. Everyone (and this statement is by no means confined to artists!) sometimes suffers a blank and falls into error. Fischer produced the odd painting which will not stand up technically, but they are few and far between. Once, in a painting done for his own amusement, he painted his old ship, the Gwydyr Castle, with a fishing schooner's wheel, and, on another occasion, painting men stowing the mainsail (and splendidly done!) he left the yard hanging in mid-air without truss or sling! Such aberrations were very much the exception, and it can be said that the great bulk of his work is not only wholly satisfying but a great maritime record. Fischer died in 1962, having reduced his output considerably in his final years, but his fame will live on long after the man himself. .t 53