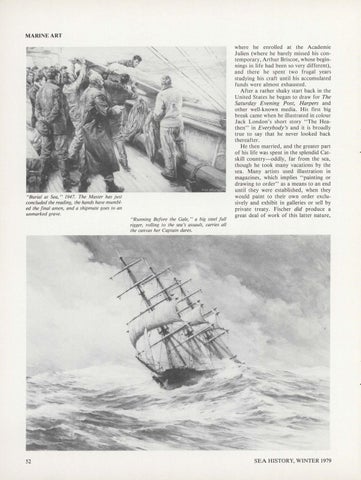 &quot;Burial al Sea,&quot; 1947. The Master has just concluded the reading, the hands have mumbled the final amen, and a shipmate goes to an unmarked grave. &quot;Running Before the Gale, &quot; a big steel full rigger, rolling to the sea&#39;s assault, carries all the canvas her Captain dares.

where he enrolled at the Academie Julien (where he barely missed his contemporary, Arthur Briscoe, whose beginnings in life had been so very different), and there he spent two frugal years studying his craft until his accumulated funds were almost exhausted. After a rather shaky start back in the United States he began to draw for The Saturday Evening Post, Harpers and other well-known media. His first big break came when he illustrated in colour Jack London&#39;s short story &quot;The Heathen &quot; in Everybody&#39;s and it is broadly true to say that he never looked back thereafter. He then married, and the greater part of his life was spent in the splendid Catskill country-oddly, far from the sea, though he took many vacations by the sea . Many artists used illustration in magazines, which implies &quot;painting or drawing to order&quot; as a means to an end until they were established, when they would paint to their own order exclusively and exhibit in galleries or sell by private treaty. Fischer did produce a great deal of work of this latter nature,