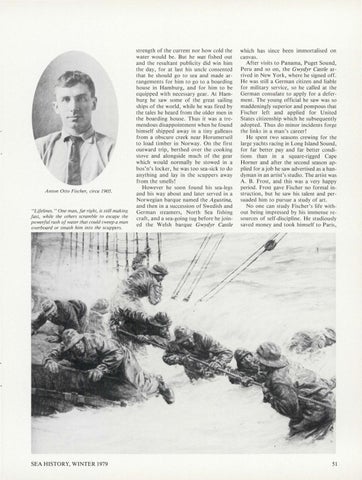 &quot;Lifelines.&quot; One man, far right, is still making fast, while the others scramble to escape the powerful rush of water that could sweep a man overboard or smash him into the scuppers.

strength of the current nor how cold the water would be. But he was fished out and the resultant publicity did win him the day, for at last hi s uncle consented that he should go to sea and made arrangements for him to go to a boarding house in Hamburg, a nd for him to be equipped with necessary gear. At Hamburg he saw so me of the great sailing ships of the world, while he was fired by the tales he heard from the older men in the boarding house. Thus it was a tremendous disappointment when he found himself shipped away in a tiny galleass from a obscure creek nea r Horumerseil to load timber in Norway. On the first outward trip, berthed over the cooking stove and alongside much of the gear which would normally be stowed in a bos&#39;n&#39; s locker , he was too sea-sick to do anything and lay in th e sc uppers away from the smells! However he soo n found his sea- legs and his way about and later served in a Norwegian barque named the Agustina, and then in a succession of Swedish and German steamers, North Sea fi shing cra ft, and a sea-going tu g before he joined the Welsh barque Gwydyr Castle

which has since been immortalised on canvas. After visits to Panama, Puget Sound, Peru and so on, the Gwydyr Castle arriv ed in New York, where he signed off. He was still a German citize n and liable for military se rvice, so he called at th e German consulate to apply for a deferment. The young official he saw was so maddeningly superior and pompous that Fischer left and applied for United States citizenship which he subsequently adopted. Thus do minor incidents forge th e link s in a man&#39; s career! He spent two seaso ns crewing for the large yachts racing in Long Island Sound, for far better pay and far better conditions than in a square-rigged Cape Horner and after the second season applied for a job he saw advertised as a handyman in an artist&#39;s studio. The artist was A. B. Frost, and this was a very happy period. Frost gave Fischer no formal instruction, but he saw his talent and persuaded him to pursue a study of a rt. No one can study Fischer&#39;s life without being impressed by his immense reso urces of self-discipline. He studiously saved money and took himself to Pari s,