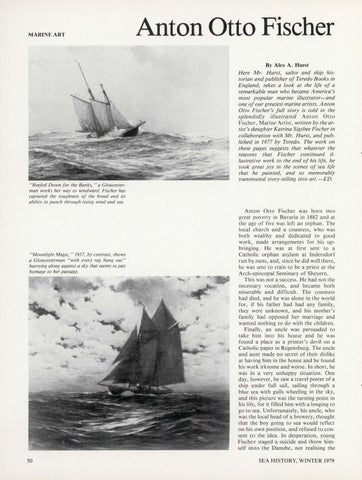 Anton Otto Fischer By Alex A. Hurst Here Mr. Hurst, sailor and ship historian and publisher of Teredo Books in England, takes a look at the life of a remarkable man who became America&#39;s most popular marine illustrator-and one of our greatest marine artists. Anton Otto Fischer&#39;s full story is told in the splendidly illustrated Anton Otto Fischer, Marine Artist, written by the artist&#39;s daughter Katrina Sigsbee Fischer in collaboration with Mr. Hurst, and published in 1977 by Teredo. The work on these pages suggests that whatever the reasons that Fischer continued illustrative work to the end of his life, he took great joy in the scenes of sea life that he painted, and so memorably transmuted story-telling into art. -ED.

&quot;Reefed Down for the Banks,&quot; a Gloucesterman works her way to windward. Fischer has captured the toughness of the breed and its ability to punch through rising wind and sea.

&quot;Moonlight Magic,&quot; 1937, by contrast, shows a Gloucesterman &quot;with every rag hung out&quot; hurrying along against a sky that seems to pay homage to her passage.

Anton Otto Fischer was born into great poverty in Bavaria in 1882 and a t the age of five was left an orphan. The local church and a countess, who was both wealthy and dedicated to good work, made arrangements for his upbringing. He was at first sent to a Catholic orphan asylum at lndersdorf run by nuns, and, since he did well there, he was sent to train to be a priest at the Arch-episcopal Seminary of Sheyern. This was not a success. He had not the necessary vocation, and became both mise rable and difficult. The countess had died, and he was a lone in the world for, if his father had had any fam ily , they were unknown , and his mother&#39; s family had opposed her marriage and wanted nothing to do with the children. Finally, an uncle was persuaded to take him into his house and he was found a place as a printer&#39; s devil on a Catholic paper in Regensburg. The uncle and aunt made no secret of their dislike at having him in the house and he found his work irksome and worse. In short, he was in a very unhappy situation. One day , however, he saw a travel poster of a ship under full sail, sailing through a blue sea with gulls whee ling in the sky, and this picture was the turning point in his life, for it filled him with a longing to go to sea . Unfortunately, his uncle, who was the local head of a brewery, thought that the boy going to sea would reflect on his own position, and refused to consent to the idea. In desperation, young Fischeir staged a suicide and threw himself imto the Danube, not realising the SEA HISTORY, WINTER I979