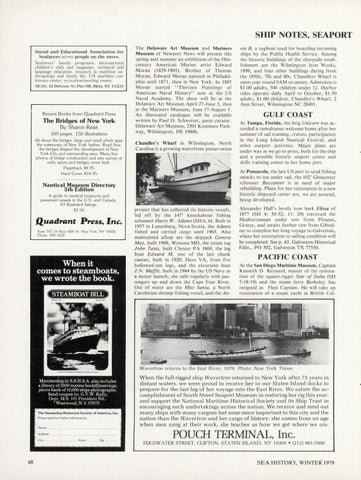 The Bridges of New York By Sharon Reier 160 pages , 150 illustrations All abo ut the bridges. large and small which span the waterways of New York harbor. Read how the bridges shaped the development of New York City and surrounding area . Many fin e photos of bridge construction and rare scenes of early spans and bridges never built . Paperback $8.95 Hard Cover $14.95

A guide to nautical museums and preserved vessels in the U.S. and Canada . 83 illustrated listings.

GULF COAST At Tampa, Flo rida, the brig Unicorn was accorded a tum ul tuous welcome home after her summer of sail train ing, cru ises, participat ion in the Long Island Nautica l Festiva l, and other outport activities. Major plans are under way as we go to press , both for the ship and a possible hi storic seaport center and skill s training center in her home port. Al Pensaco la , the last US port to send fishing smacks to sea under sail , the I 02&#39; Gloucester schooner Buccaneer is in need of major rebuilding. Plans for her restoration in a new historic sh ipyard cente~ are, we are assured, being developed.

project that has collected six historic vessels, led off by the 147&#39; knockabout fishing schooner Harry W. Adams (S H 6, 6). Built in 1937 in Lunenburg, Nova Scotia, the Adams fished and carried cargo until 1965 . Also maintained afloat are the skipjack Geneva May, built 1908, Wenona MD, the steam tug John Taxis, built Chester PA 1869, the log boat Edward M, one of the last chunk canoes, built in 1920, Dave VA, from five ho llowed-out logs, and the excursion boat J. N. Maffit, built in 1944 by the US Navy as a motor launch; she sail s regularly with passengers up and down the Cape Fear River. Out of water are the Miss Santa, a North Caro linian shrimp fishing vessel, and the An-

PACIFIC COAST At the San Diego Maritime Museum, Captain Kenneth D. Reynard, master of the restoration of the square-rigger Star of India (SH 5: 18-19) and the steam ferry Berkeley, has resigned as Fleet Captain. He will take up restoration of a steam yacht in Brit ish Col-

I Please send me further info rma d on.

When the full-rigged ship Wavertree returned to New York after 75 years in distant waters, we were proud to receive her in our Staten Island docks to prepare for the last leg of her voyage into the East River. We sa lute the accompl ishment of South Street Seaport Museum in restoring her rig this year, and support the National Maritime Historical Society and its Ship Trust in encouraging such undertakings across the nation. We receive and send out many ships with many cargoes but none more important to this city and the nation than the Wavertree and her cargo of history: she comes from an age when men sang at their work. she teaches us how we got where we are.