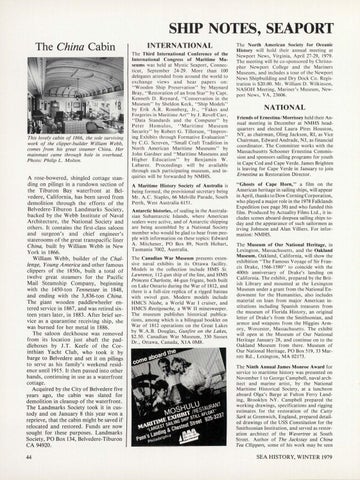 This lovely cabin of 1866, the sole surviving work of the clipper-builder William Webb, comes from his great steamer China. Her mainmast came through hole in overhead. Photo: Philip L. Molten.

A rose-bowered, shingled cottage standing on pilings in a rundown section of the Tiburon Bay waterfront at Belvedere, California, has been saved from demolition through the efforts of the Belvedere-Tiburon Landmarks Society, backed by the Webb Institute of Naval Architecture, the National Society and others. It contains the first-class saloon and surgeon&#39;s and chief engineer&#39;s staterooms of the great transpacific liner China, built by William Webb in New York in 1866. William Webb, builder of the Challenge, Young America and other famous clippers of the 1850s, built a total of twelve great steamers for the Pacific Mail Steamship Company, beginning with the 1450-ton Tennessee in 1848 and ending with the 3,836-ton China&#39;. The giant wooden paddlewheeler entered service in 1867, and was retired sixteen years later, in 1883 . After brief service as a quarantine receiving ship, she was burned for her metal in 1886. The saloon deckhouse was removed from its location just abaft the paddleboxes by J .T. Keefe of the Corinthian Yacht Club, who took it by barge to Belvedere and set it on pilings to serve as his family&#39;s weekend residence until 1915. It then passed into other hands, continuing in use as a waterfront cottage. Acquired by the City of Belvedere five years ago, the cabin was slated for demolition in cleanup of the waterfront. The Landmarks Society took it in custody and on January 8 this year won a reprieve, that the cabin might be saved if relocated and restored. Funds are now sought for these purposes. Landmarks Society, PO Box 134, Belvedere-Tiburon CA 94920. 44

INTERNATIONAL The Third International Conference of the International Congress of Maritime Museums was held at Mystic Seaport, Connecticut, September 24-29. More than 100 delegates attended from around the world to exchange views and hear papers on: &quot;Wooden Ship Preservation&quot; by Maynard Bray, &quot;Restoration of a n Iron Star&quot; by Capt. Kenneth D. Reynard, &quot;Conservat ion in the Museum&quot; by Sheldon Keck, &quot;S hip Models&quot; by Erik A.R. Ronnberg, Jr., &quot;Fakes and Forgeries in Maritime Art&quot; by J. Reve ll Carr, &quot;Data Standards and the Comp uter&quot; by Peter Homulos, &quot;Maritime Museum Security&quot; by Robert G. Tillotson, &quot;Improvin g Exhibits through Formative Evaluation&quot; by C.G. Screven, &quot;Small Craft Tradition in North American Maritime Museums&quot; by John Gardner and &quot;Maritime Museums and Hi gher Educat ion&quot; b y Benjamin W. Labaree. Proceedings will be available through each participating museum, and inquiries wi ll be forwarded by NMHS. A Maritime History Society of Australia is being formed, the provisional sec retary being Mr. A.C. Staples, 66 Melville Parade, South Perth , West Australia 6151. Antarctic histories, of sealing in the Australasian Subantarctic Islands, where American sealers were active, and of Antarctic shipping are being assem bled by a National Society member who would be glad to hear from people with information on these topics: Edward A. Mitchener, PO Box 89, North Hobart , Tasmania 7002, Australia. The Canadian War Museum presents extensive naval ex hibit s in its Ottawa facility. Models in the co llection include HMS St. Lawrence, 112-gun ship of the line, and HMS Princess Charlolle, 44-gun frigate, both built on Lake Ontario during the War of 1812, and there is a full-size replica of a rigged bateau with swivel gun. Modern models include HM CS Niobe, a World War I cruiser, and HMCS Restigouche, a WW II minesweeper. The museum publishes historical publications, among which is a bilingual booklet on War of 1812 operat ions on the Great Lakes by W.A.B. Douglas, Gunfire on the Lakes, $2.50. Ca nadian War Museum, 330 Sussex Dr., Ottawa, Canada, XIA OMS.

NATIONAL I&lt;&#39; riends of Ernestina/ Morrissey held their Annual meeting in December at NMHS headquarters and elected Laura Pires Houston NY, as chairman, Oling Jackso n, RI, as Vic; Chairman, Edward Andrade, NJ, as financial coordinator. The Committee works with the Massachusetts Schooner Ernestina Commission and sponsors sai ling programs for youth in Cape Cod and Cape Verde. James Brighten is leaving for Cape Verde in January to join Ernestina as Restoration Director. &quot;Ghosts of Cape Horn,&quot; a film on the American heritage in sailing ships, will appear in April, thank s to Dow Corning Corporation, who played a major role in the 1978 Falklands Expedition (see page 38) and who funded this film. Produced by Actuality Films Ltd., it includes scenes aboard deepsea sailing ships today and the appearance of such sailormen as irving John son and Alan Villiers. For information: NMHS. The_ Museum of Our National Heritage, in Lexington, Massachusetts, and the Oakland Museum, Oakland, California, will show the exhibition &quot;The Famous Voyage of Sir Francis Drak e, 1566-1580&quot; to coincide with the 400th anniversary of Drake&#39;s landing on California. The exh ibit, prepared by th e British Library and mounted at the Lexington Museum under a grant from the National Endowment for the Humanities, also includes material on loan from major American institutions including Spanish treasures from the museum of Florida History, an original lett er of Drake&#39;s from the Smithsonian, and armor and weapons from the Higgins Armory, Worcester, Massachusetts. The exhibit will open at the Museum of Our National Heritage January 28, and continue on to the Oakland Mu seum from there. Museum of Our National Heritage, PO Box 519, 33 Marrett Rd ., Lexington , MA 02173 . The Ninth Annual James Monroe Award for serv ice to maritime history was presented on November I to George Campbell, naval architect and marine artist, by the National Maritime Hi sto rical Society, at a luncheon aboard Olga&#39;s Barge at Fulton Ferry Landing, Brooklyn NY. Campbell prepared the working drawings, specifications and rigging estimates . for the restoration of the Cully Sark at Greenwich, England, prepared detailed drawings of the USS Constitution for the Smithsonian Institution, and served as restoration architect of the Wavertree at South Street. Author of The Jackstay and China Tea Cllippers, so me of his work may be seen