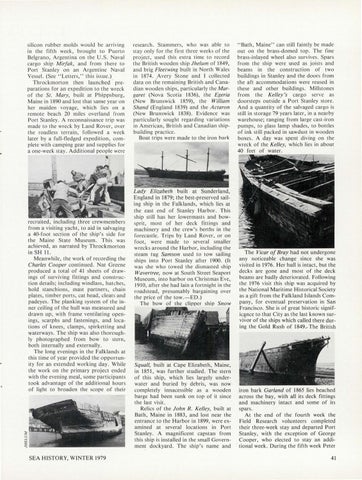 silicon rubber molds wou ld be arriving in the fifth week, brought to Puerto Belgrano, Arge ntina on the U.S. Naval cargo ship Mirfak, and from there to Port Stanley on a n Argenti ne Naval Vessel. (See &quot;Letters,&quot; this iss ue .) Throckmorton then launc hed Âˇ preparations for an expedition to the wreck of the St. Mary, built at Phippsburg, Maine in 1890 and lost that same year on her maiden voyage, which lies on a remote beach 20 miles overla nd from Port Stan ley. A reconnaissance trip was made to the wreck by Land Rover, over the road less terrain, fo llowed a week later by a full-fledged expedition, complete with campin g gear and supplies for a one-week stay. Additional people were

&quot;Bat h, Maine&quot; can still faintly be made research. Stammers, who was ab le to o ut o n the brass-domed top. The fine stay on ly for the first three weeks of the project, used this extra time to record brass-inlayed wheel also survives. Spars from the ship were used as j oists an d the British wooden ship Jhelum of 1849, and brig Fleetwing built in North Wales beams in th e construction o f two buildings in Stanley an d the doors from in 1874. Avery Sto ne and I collected th e aft accommodations were reused in data on th e remaining British and Canathese a nd other buildings. Millstones dian wooden ships, particularly the Margaret (Nova Scot ia 1836), the Egeria from th e Kelley&#39;s cargo serve as (New Brunswick 1859), the William Âˇ doorsteps o utside a Port Stanley store. Shand (England 1839) and the Actaron And a quantity of the salvaged cargo is still in storage 79 years later, in a near by (New Brun swick 1838). Evidence was particularly so ught regarding var ia ti o ns warehouse; ranging from large cast-iron in American, British a nd Canadian shippumps, to glass lamp shades, to bottles of ink still packed in sawdust in wooden bui lding practice. Boat trips were made to the iron hark boxes. A da y was spe nt diving on the wreck of the Kelley, which lies in abo ut 40 feet of water.

recruited, in cluding three crewmembers from a visiting yac ht , to aid in salvagi ng a 40-foot secti on o f the sh ip &#39;s side for the Maine State Museum. This was ac hieved, as narrated by Throckmorton in SH 11. Meanwhile, the work of recording the Charles Cooper co ntinued. Nat Greene produced a total of 41 sheets of drawings of surviving fittings and constructio n details; including windlass, hatches, hold stanchions, mast partners, chain plates, timber ports, cat head, cleats a nd padeyes. The planking system of th e inner ceiling of the hull was measured a nd drawn up , wit h frame ve ntilating openings, scarp hs and fastenings, and locations of knees, clamps, spi rk etti ng a nd wate rways. The ship was also thoroughly photograp hed from bow to stern , both intern a ll y and externally. The long evenings in the Falklands at this time of year provided the opportunity for an extended worki ng day. While the work on the primary project ended with th e evening meal, some participants took advantage of the ad diti onal hours of light to broaden the sco pe of th eir

England in 1879; the best-preserved sailing ship in th e Falklands, which lies at the east end of Stanley Harbo r. This ship st ill has her lowermasts a nd bowspri t, mos t of her deck fittings and machinery and th e crew&#39;s berths in the forecas tl e. Trips by Land Rover, or on foot, were made to several smaller wrec ks around th e Harbor, including the steam tug Samson used to tow sailing ships into Port Stanley after 1900. (It was she who towed the di smasted ship Wavertree, now at South Street Seaport Museum, into harbor on C hristmas Eve, 1910, after she had lain a fo rtni ght in the roadstead , presumably bargaining over th e price of the tow.-ED.) The bow of the clipper ship Snow

The Vicar of Bray had not undergone any noticeable change since she was visited in 1976. Her hull is intact, but the decks are gone and most of the deck beams a re badly deteriorated. Following th e 1976 visit this ship was acquired by the Natio nal Maritime Historica l Society as a gift from the Falkland Islands Compa ny, for eventual preservation in San Francisco. She is of grea t historic significl!nce to that City as the last known survivor of the ships which called there during the Gold Ru sh of 1849 .. The British

Squall, built at Cape Elizabeth, Maine, in 1851, was further st udi ed. The stern of this ship, which lies largely underwater and buried by debris, was now completely innacessible as a wooden barge had been sunk on top of it since the last visi t. Relics of the John R. Kelley, built at Bath, Maine in 1883, and lost near the entrance to the Harbor in 1899, were exami ned at several locations in Port Stanley. A magnificent capstan from this ship is installed in th e small Government dockyard. The ship&#39; s na me and

iron bark Garland of 1865 lies beached across the bay , with all its deck fittings and machinery intact a nd some of its spars. At the end of the fourth week the Field Research volunteers completed th eir three-week stay and departed Port Stanley, with the exception of Geo rge Coo per, who elected to stay an addi&#39; tional week. During th e fifth week P eter 41