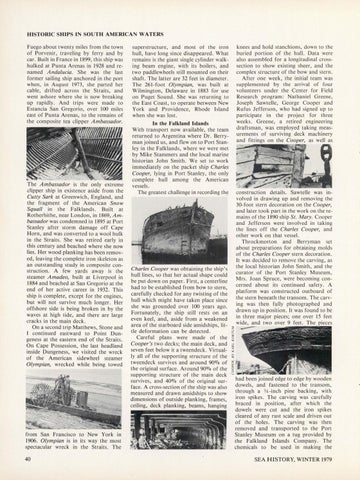 HISTORIC SHIPS IN SOUTH AMERICAN WATERS Fuego about twenty miles from the town of Porvenir, traveling by ferry and by car. Built in France in 1899, this ship was hulked at Punta Arenas in 1928 and renamed Andalucia. She was the last former sailing ship anchored in the port when, in August 1973, she parted her cable, Âˇ drifted across the Straits, and went ashore where she is now breaking up rapidly. And trips were made to Estancia San Gregorio, over 100 miles east of Punta Arenas, to the remains of the composite tea clipper Ambassador.

is the only extreme clipper ship in existence aside from the Cutty Sark at Greenwich, England, and the fragment of the American Snow Squall in the Falklands. Built at Rotherhithe, near London , in 1869, Ambassador was condemned in 1895 at Port Stanley after storm damage off Cape Horn, and was converted to a wool hulk in the Straits. She was retired early in this century and beached where she now lies. Her wood planking has been removed, leaving the complete iron skeleton as an outstanding study in composite construction . A few yards away is the steamer Amadeo, built at Liverpool in 1884 and beached at San Gregorio at the end of her active career in 1932. This ship is complete, except for the engines, but will not survive much longer. Her offshore side is being broken in by the waves at high tide, and there are large cracks in the main deck. On a second trip Matthews, Stone and I continued eastward to Point Dungeness at the eastern end of the Straits. On Cape Possession, the last headland inside Dungeness, we visited the wreck of the American sidewheel steamer Olympian, wrecked while being towed

from San Francisco to New York m 1906. Olympian is in its way the most spectacular wreck in the Straits. The 40

superstructure, and most of the iron hull, have long since disappeared . What remains is the giant single cylinder walking beam engine, with its boilers, and two paddlewheels still mounted on their shaft. The latter are 32 feet in diameter. The 261-foot Olympian, was built at Wilmington, Delaware in 1883 for use on Puget Sound. She was returning to the East Coast, to operate between New York and Providence, Rhode Island when she was lost.

In the Falkland Islands With transport now available, the team returned to Argentina where Dr. Berryman joined us, and flew on to Port Stanley in the Falklands, where we were met by Mike Stammers and the local marine historian John Smith . We set to work immediately on the packet ship Charles Cooper, lying in Port Stanley, the only complete hull among the American vessels. The greatest challenge in recording the

Charles Cooper was obtaining the ship&#39;s

knees and hold stanchions, down to the buried portion of the hull. Data were also assembled for a longitudinal crosssection to show existing sheer, and the complex structure of the bow and stern. After one week, the initial team was supplemented by the arrival of four volunteers under the Center for Field Research program : Nathaniel Greene, Joseph Sawtelle, George Cooper and Rufus Jefferson, who had signed up to participate in the project for three weeks. Greene, a retired engineering draftsman, was employed taking measurements of surviving deck machinery and fittings on the Cooper, as well as

construction details. Sawtelle was involved in drawing up and removing the 30-foot stern decoration on the Cooper, and later took part in the work on the remains of the 1890 ship St. Mary. Cooper and Jefferson were involved in taking the lines off the Charles Cooper, and other work on that vessel. Throckmorton and Berryman set about preparations for obtaining molds of the Charles Cooper stern decoration. It was decided to remove the carving, as the local historian John Smith, and the curator of the Port Stanley Museum, Mrs. Joan Spruce, were becoming concerned about its continued safety. A platform was constructed outboard of the stern beneath the transom. The carving was then fully photographed and drawn up in position. It was found to be in three major pieces; one over 15 feet wide, and two over 9 feet. The pieces ~ ~

hull lines, so that her actual shape could be put down on paper. First, a centerline had to be established from bow to stern, carefully checked for any twisting of the hull which might have taken place since she was grounded over JOO years ago. Fortunately, the ship still rests on an even keel, and, aside from a weakened area of the starboard side amidships, little deformation can be detected . Careful plans were made of the 0&quot;&#39;&#39;&lt; Cooper&#39;s two decks; the main deck, and ;;! seven feet below it a tweendeck. Virtual- ;;: ly all of the supporting structure of the tweendeck survives and around 900Jo of the original surface. Around 900Jo of the supporting structure of the main deck had been joined edge to edge by wooden survives, and 400Jo of the original surdowels, and fastened to the transom, face. A cross-section of the ship was also through a Y:. -inch pine backing, with measured and drawn amidships to show iron spikes. The carving was carefully dimensions of outside planking, frames, braced in position, after which the ceiling, deck planking, beams, hanging dowels were cut and the iron spikes cleared of any rust scale and driven out of the holes. The carving was then removed and transported to the Port Stanley Museum on a tug provided by the Falkland Islands Company. The chemicals to be used in making the