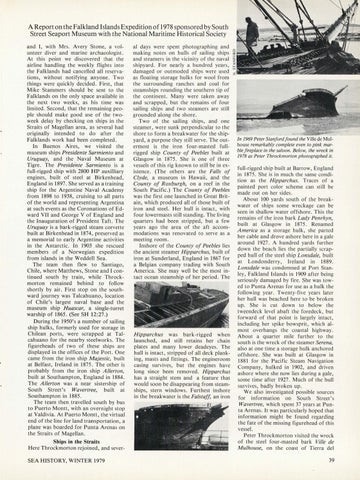 A Report on the Falkland Islands Expedition of 1978 sponsored by South Street Seaport Museum with the National Maritime Historical Society and I, with Mrs. Avery Stone, a volunteer diver and marine archaeologist. At this point we discovered that the airline handling the weekly flights into the Falklands had cancelled all reservations, without notifying anyone. Two things were quickly decided. First, that Mike Stammers should be sent to the Falklands on the only space available in the next two weeks, as his time was limited. Second, that the remaining people should make good use of the twoweek delay by checking on ships in the Straits of Magellan area, as several had originally intended to do after the Falklands work had been completed . In Buenos Aires, we visited the museum sh ips Presidente Sarmiento and Uruguay, and the Naval Museum at Tigre. The Presidente Sarmiento is a full-rigged ship with 2800 HP auxilliary engines, built of steel at Birkenhead, England in 1897. She served as a training ship for the Argentine Naval Academy from 1898 to 1938, cruising to all parts of the world and representing Argentina at such events as the Coronations of Edward VII and George V of England and the Inauguration of President Taft. The Uruguay is a bark-rigged steam corvette built at Birkenhead in 1874, preserved as a memorial to early Argentine activities in the Antarctic. In 1903 she rescued members of a Norwegian expedition from islands in the Weddell Sea. The team then flew to Santiago, Chile, where Matthews, Stone and I continued south by train, while Throckmorton remained behind to follow shortly by air. First stop on the southward journey was Talcahuano, location of Chile's largest naval base and the museum ship Huascar, a single-turret warship of 1865 . (See SH 12:27.) During the l 950's a number of sailing ship hulks, formerly used for storage in Chilean ports, were scrapped at Talcahuano for the nearby steelworks. The figureheads of two of these ships are displayed in the offices of the Port. One came from the iron ship Majestic, built at Belfast, Ireland in 1875. The other is probably from the iron ship Allerton, built at Southampton, England in 1884. The Allerton was a near sistership of South Street's Wavertree, built at Southampton in 1885. The team then travelled south by bus to Puerto Montt,' with an overnight stop at Valdivia. At Puerto Montt, the virtual end of the line for land transportation, a plane was boarded for Punta Arenas on the Straits of Magellan. Ships in the Straits Here Throckmorton rejoined, and severSEA HISTORY, WINTER 1979

al days were spent photographing and making notes on hulls of sai ling ships and steamers in the vicinity of the naval shipyard. For nearly a hundred years, damaged or outmoded ships were used as floating storage hulks for wool from the surrounding ranches and coal for steamships rounding the southern tip of the continent. Many were taken away and scrapped, but the remains of four sai ling ships and two steamers are st ill grounded along the shore. Two of the sai ling ships, and one steamer, were sunk perpendicular to the shore to form a breakwater for the shipyard, a purpose they still serve. Ttie outermost is the iron four-masted fullrigged ship County of Peebles built at Glasgow in 1875 . She is one of three vessels of this rig known to still be in existence. (The others are the Falls of Clyde, a museum in Hawaii, and the County of Roxburgh, on a reef in the South Pacific.) The County of Peebles was the first one launched in Great Britain, which produced all of those built of iron and steel. Her hull is intact, with four lowermasts still standing. The li ving quarters had been stripped, but a few years ago the area of the aft accommodations was renovated to serve as a meeting room . Inshore of the County of Peebles lies the ancient steamer Hipparchus, built of iron at Sunderland, England in 1867 for a Belgian company trading with South America. She may well be the most intact ocean steamship of her period. The --...____

bark-rigged when launched, and still retains her chain plates and many lower deadeyes. The hull is intact, stripped of all deck planking, masts a nd fittings. The engineroom casing survives, but the engines have long since been removed . Hipparchus has a st raight stem and a feature that would soon be disappearing from steamships, stern windows. Furthest inshore in the breakwater is the Falstaff, an iron 110;:,

In 1969 Peter Stanford found the Ville de Mulhouse remarkably complete even to pink marble fireplace in the saloon. Below, the wreck in 1978 as Peter Throckmorton photographed it.

full-rigged ship built at Barrow, England in 1875 . She is in much the sai:ne condition as the Hipparchus. Traces of a painted port color scheme can still be made out on her sides. About 100 yards south of the breakwater of ships some wreckage can be seen in shallow water offshore. This the remains of the iron bark Lady Penrhyn, built at Glasgow in 1875. Renamed America as a storage hulk, she parted her cable and drove ashore here in a gale around 1927. A hundred yards further down the beach lies the partially scrapped hull of the steel ship Lonsdale, built at Londonderry, Ireland in 1889. Lonsdale was condemned at Port Stanley, Falkland Islands in 1909 after being seriously damaged by fire . She was towed to Punta Arenas for use as a hulk the following year. Twenty-five years later her hull was beached here to be broken up. She is cut down to below the tweendeck level abaft the foredeck, but forward of that point is largely intact, including her spike bowsprit, which almost overhangs the coastal highway. About a quarter mile further to the south is the wreck of the steamer Serena, also at one time a storage hulk anchored offshore. She was built at Glasgow in 1881 for the Pacific Steam Navigation Company, hulked in 1902, and driven ashore where she now lies during a gale, some time after 1927. Much of the hull survives, badly broken up. We also investigated possible sources for information on South Street's Wavertree, which spent 37 years at Punta Arenas. It was particularly hoped that information might be found regarding the fate of the missing figurehead of this vessel. Peter Throckmorton visited the wreck of the steel four-masted bark Ville de Mu/house, on the coast of Tierra del 39