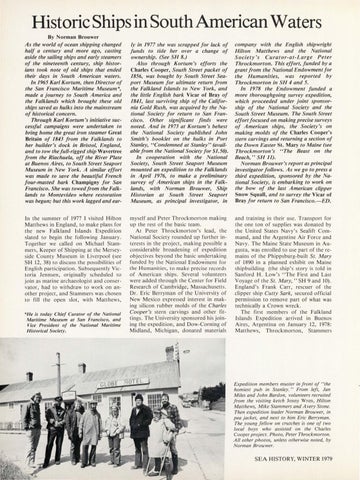 Historic Ships in South Atnerican Waters By Norman Brouwer As the world of ocean shipping changed half a century and more ago, casting aside the sailing ships and early steamers of the nineteenth century, ship historians took note of old ships that ended their days in South American waters. In 1965 Karl Kortum. then Director of the San Francisco Maritime Museum*, made a journey to South America and the Falklands which brought these old ships saved as hulks into the mainstream of historical concern. Through Karl Kortum 's initiative success/ul campaigns were undertaken to bring home the great iron steamer Great Britain of 1843 from the Falklands to her builder's dock in Bristol, England, and to tow the full-rigged ship Wavertree from the Riachuela, off the River Plate at Buenos Aires, to South Street Seaport Museum in New York. A similar effort was made to save the beautiful French four-masted bark Champigny for San Francisco. She was towed from the Falklands to Montevideo where restoration was begun; but this work lagged and earIn the summer of 1977 I visited Hilton Matthews in England, to mak e plans for th e new Falkland Islands Expedit ion slat ed to begin the following January. Together we called on Michael Stammers, Keeper of Shipping at the Merseyside Co unt y Museum in Liverpool (see SH 12, 38) to discuss the possibilities of English participation. Subsequently Victori a Jennsen, originall y sc heduled to join as marine archaeologist and conservator, had to withdraw to work on another project, and Stammers was chosen to fill th e open slot, with Matthews, *He is today Chief Curator of the National Maritime Museum at San Francisco, and Vice President of the National Maritime Historical Society.

company with the English shipwright Hilton Matthews and the National Society's Curator-at-Large Peter Throckmorton. This effort, funded by a grant from the National Endowment for the Humanities, was reported by Throckmorton in SH 4 and 5. In 1978 the Endowment funded a more thoroughgoing survey expedition, which proceeded under joint sponsorship of the National Society and the South Street Museum. The South Street effort focused on making precise surveys of American ships, the Society's on making molds of the Charles Cooper's stern carvings and returning a section of the Down Easter St. Mary to Maine (see Throckmorton's "The Beast on the Beach," SH 11). Norman Brouwer 's report as principal investigator follows. As we go to press a third expedition, sponsored by the National Society, is embarking to work on the bow of the last American clipper Snow Squall, and to survey the Vicar of Bray for return to San Francisco.-ED.

myself and Peter Throckmorton making up the rest of the basic team. At Peter Throckmorton's lead, the National Society rounded up further interests in the project, making possible a considerab le broadening of expedition objectives beyond the basic undertaking funded by the National Endowment for the Humanities, to make precise records of American ships. Several volunteers were added through the Center for Field Resea rch of Cambridge, Massachusetts. Dr. Eric Berryman of the University of New Mexico expressed interest in making silicon rubber molds of the Charles Cooper's stern carvings a nd ot her fittings . The University sponsored his joining the expedition, and Dow-Corning of Midland, Michigan, donated materials

and training in their use. Transport for the one ton of suppli es was don ated by the United States Navy's Sealift Co mmand, and the Argentine Air Force a nd Navy. The Maine State Museum in Augusta, was enro lled to use part of th e remains of the Phippsburg-built St. Mary of 1890 in a planned exhibit on Maine shipbuilding (the ship' s story is told in Sanford H. Low's "The First and Last Voyage of the St. Mary," SH 9 and 10) . England's Frank Carr, rescuer of the clipper ship Cutty Sark, secured official permission to remove part of what was technically a Crown wreck. The first members of the Falkland Islands Expedit ion arrived in Buenos Aires, Arge ntin a on January 12, 1978: Matthews, Throckmorton, Stammers

Expedition members muster in front of " the homiest pub in Stanley. " From left, Jan Miles and John Bardon, volunteers recruited from the visiting ketch Jenny Wren, Hilton Matthews, Mike Stammers and A very Stone. Then expedition leader Norman Brouwer, in pea jacket, and next lo him Eric Berryman. The young fe llow on crutches is one of two local boys who assisted on the Charles Cooper project. Photo, Peter Throckmorton . All other photos, unless otherwise noted, by Norman Brau wer.