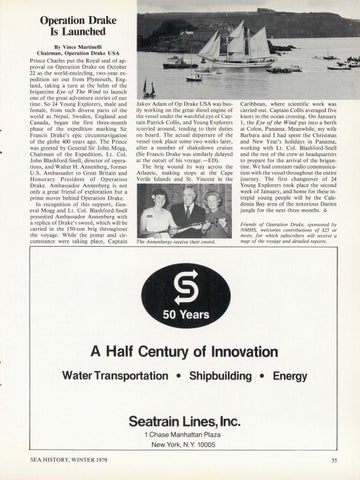 Operation Drake Is Launched By Vince Martinelli Chairman, Operation Drake USA Prince Charles put the Royal seal of approval on Operation Drake on October 22 as the world-encircling, two-year expedition set out from Plymouth, England, taking a turn at the helm of the brigantine Eye of The Wind to launch one of the great adventure stories of our time. So 24 Young Explorers, male and female, from such diverse parts of the world as Nepal, Sweden, England and Canada, began the first three-month phase of the expedition marking Sir Francis Drake' s epic circumnavigation of the globe 400 years ago. The Prince was greeted by General Sir John Mogg, Chairman of the Expedition, Lt. Col. John Blash ford-Snell, director of operations, and Walter H. Annenberg, former U.S. Ambassador to Great Britain and Honorary President of Operation Drake . Ambassador Annenberg is not only a great friend of exploration but a prime mover behind Operation Drake. In recognition of this support, Gen-era! Mogg and Lt. Col. Blashford-Snell presented Ambassador Annenberg with a replica of Drake's sword, which will be carried in the 150-ton brig throughout the voyage. While the pomp and circumstance were taking place, Captain

Jakov Adam of Op Drake USA was busily working on the great diesel engine of the vessel under the watchful eye of Captain Patrick Collis, and Young Explorers scurried around, tending to their duties on board. The actual departure of the vessel took place some two weeks later, after a number of shakedown cruises (Sir Francis Drake was similarly delayed at the outset of his voyage .-ED) . The brig wound its way across the Atlantic, making stops at the Cape Verde Islands and St. Vincent in the

Caribbean, where scientific work was carried out. Captain Collis averaged five knots in the ocean crossing. On January I , the Eye of the Wind put into a berth at Colon, Panama. Meanwhile, my wife Barbara and I had spent the Christmas and New Year's holidays in Panama, working with Lt. Col. Blashford-Snell and the rest of the crew at headquarters to prepare for the arrival of the brigantine. We had constant radio communication with the vessel throughout the entire journey. The first changeover of 24 Young Explorers took place the second week of January, and home for these intrepid young people will be the Caledonia Bay area of the notorious Darien jungle for the next three months. w

The Annenbergs receive their sword.

Friends of Operation Drake, sponsored by NMHS, welcomes contributions of $25 or more, for which subscribers will receive a map of the voyage and detailed reports.