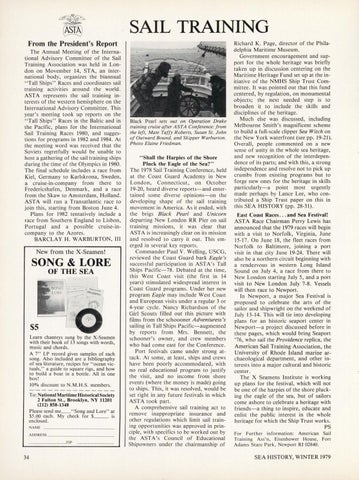 From the President&#39;s Report The Annual Meeting of the International Advisory Committee of the Sail Training Association was held in London on Movember 14, STA, an international body, organizes the biannual &quot;Tall Ships&quot; Races and coordinates sail training activities around the world. AST A represents the sail training interests of the western hemisphere on the International Advisory Committee. This year&#39;s meeting took up reports on the &quot;Tall Ships&quot; Races in the Baltic and in the Pacific, plans for the International Sail Training Races 1980, and suggestions for programs in 1982 and 1984. At the meeting word was received that the Soviets regretfully would be unable to host a gathering of the sail training ships during the time of the Olympics in 1980. The final schedule includes a race from Kiel, Germany to Karlskrona, Sweden, a cruise-in-company from there to Fredericshafen, Denmark, and a race from the Skaw to Amsterdam, Holland. AST A will run a Transatlantic race to join this, starting from Boston June 4. Plans for 1982 tentatively include a race from Southern England to Lisbon, Portugal and a possible cruise-incompany to the Azores. BARCLAY H. WARBURTON, III

SONG &amp; LORE OF THE SEA

Learn chanteys sung by the X-Seamen with their book of 13 songs with words, music and chords. A 7&quot; LP record gives samples of each song. Also included are a bibliography of sea literature, recipes for &quot;ocean victuals, &quot; a guide to square rigs, and how to build a boat in a bottle. All in one box! 10% discount to N.M.H.S. members. To: National Maritime Historical Society 2 Fulton St., Brooklyn, NY 11201 (212) 858-1348

&quot;Shall the Harpies of the Shore Pluck the Eagle of the Sea?&quot; The 1978 Sail Training Conference, held at the Coast Guard Academy in New London, Connecticut, on October 19-20, heard diverse reports-and entertained some diverse opinions-on the developing shape of the sail training movement in America . As it ended, with the brigs Black Pearl and Unicorn departing New London RR Pier on sail training missions, it was clear that AST A is increasingly clear on its mission and resolved to carry it out. This emerged in several key reports. Commander Paul V. Welling, USCG, reviewed the Coast Guard bark Eagle&#39;s successful participation in ASTA&#39;s Tall Ships Pacific-78 . Debated at the time, this West Coast visit (the first in 14 years) stimulated widespread interest in Coast Guard programs. Under her new program Eagle may include West Coast and European visits under a regular 3 or 4-year cycle. Nancy Richardson of the Girl Scouts filled out this picture with films from the schoooner Adventuress&#39;s sailing in Tall Ships Pacific-augmented by reports from Mrs. Bennett, the schooner&#39;s owner, and crew members who had come east for the Conference. Port festivals came under strong attack. At some, at least, ships and crews have been poorly accommodated, with no real educational program to justify the visit, and no income from shore events (where the money is made) going to ships . This, it was resolved, would be set right in any future festivals in which AST A took part. A comprehensive sail training act to remove inappropriate insurance and other regulations which limit sail training opportunities was_approved in principle, with specifics to be worked out by the ASTA&#39;s Council of Educational Shipowners under the chairmanship of

Richard K. Page, director of the Philadelphia Maritime Museum. Government encouragement and support for the whole heritage was briefly taken up in discussion centering on the Maritime Heritage Fund set up at the initiative of the NMHS Ship Trust Committee. It was pointed out that this fund centered, by regulation, on monumental objects; the next needed step is to broaden it to include the skills and disciplines of the heritage. Much else was discussed, including Melbourne Smith&#39;s magnificent scheme to build a full-scale clipper Sea Witch on the New York waterfront (see pp. 19-21). Overall, people commented on a new sense of unity in the whole sea heritage, and new recognition of the interdependence of its parts; and with this, a strong independence and resolve not to pick up crumbs from existing programs but to forge new ones for the heritage in skills particularly-a point most urgently made perhaps by Lance Lee, who contributed a Ship Trust paper on this in this SEA HISTORY (pp. 28-31) .

East Coast Races ... and Sea Festival! AST A Race Chairman Perry Lewis has announced that the 1979 races will begin with a visit to Norfolk, Virginia, June 15-17. On June 18, the fleet races from Norfolk to Baltimore, joining a port visit in that city June 19-24. There will also be a northern circuit beginning with a rendezvous in western Long Island Sound on July 4, a race from there to New London starting July 5, and a port visit to New London July 7-8. Vessels will then race to Newport. In Newport, a major Sea Festival is proposed to celebrate the arts of the sailor and shipwright on the weekend of July 13-14. This will tie into developing plans for an historic seaport center in Newport-a project discussed before in these pages, which would bring Seaport &#39;76, who sail the Providence replica, the American Sail Training Association, the University of Rhode Island marine archaeological department, and other interests into a major cultural and historic center. The X Seamens Institute is working up plans for the festival, which will not be one of the harpies of the shore plucking the eagle of the sea, but of sailors come ashore to celebrate a heritage with friends-a thing to inspire, educate and enlist the public interest in the whole heritage for which the Ship Trust works. PS For Further information: American Sail Training Ass &#39;n , Eisenhower House, Fort Adam s State Park, Newport RI 02840. SEA HISTORY, WINTER 1979