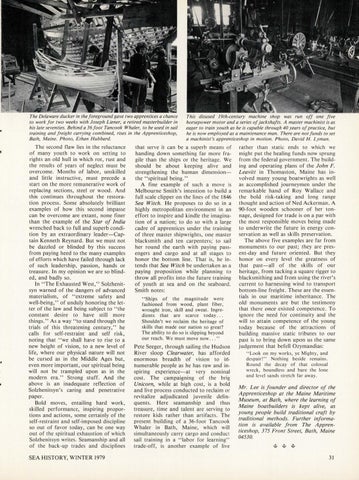 The Delaware ducker in the foreground gave two apprentices a chance to work for two weeks with Joseph Liener, a retired masterbuilder in his late seventies. Behind a 36 foot Tancook Whaler, to be used in sail training and freight carrying combined, rises in the Apprenticeshop, Bath, Maine. Photo, Ethan Hubbard.

The second flaw lies in the reluctance of many youth to work on setting to rights an old hull in which rot, rust and the results of years of neglect must be overcome. Months of labor, unskilled and little instructive, must precede a start on the more remunerative work of replacing sections, steel or wood. And this continues throughout the restoration process. Some absolutely brilliant examples of how this second impasse can be overcome are extant , none finer than the example of the Star of India wrenched back to full and superb condition by an extraordinary leader-Captain Kenneth Reynard. But we must not be dazzled or blinded by this success from paying heed to the many examples of efforts which have failed through lack of such leadership, passion, hands or treasure . In my opinion we are so blinded, and badly so. In "The Exhausted West," Solzhenitsyn warned of the dangers of advanced materialism, of "extreme safety and well-being," of unduly honoring the letter of the law and being subject to "the constant desire to have still more things." As a way "to stand through the trials of this threatening century," he calls for self-restraint and self risk, noting that "we shall have to rise to a new height of vision, to a new level of life, where our physical nature will not be cursed as in the Middle Ages but, even more important, our spiritual being will not be trampled upon as in the modern era. " Strong stuff. And the above is an inadequate reflection of Solzhenitsyn 's caring and penetrative paper. 路 Bold moves, entailing hard work, skilled performance, inspiring proportions and actions, some certainly of the self-restraint and self-imposed discipline so out of favor today, can be one way out of the spiritual exhaustion of which Solzhenitsyn writes. Seamanship and all of the back-up trades and disciplines SEA HISTORY, WINTER 1979

This disused 19th-century machine shop was run off one five horsepower motor and a series of jackshafts. A master machinist is as eager to train youth as he is capable through 40 years of practice, but he is now employed as a maintenance man. There are not funds to set a machinist's apprenticeshop in motion. Photo, David H. Lyman.

that serve it can be a superb means of handing down something far more fragile than the ships or the heritage. We should be about keeping alive and strengthening the human dimensionthe "spiritual being." A fine example of such a move is Melbourne Smith's intention to build a full scale clipper on the lines of the 1846 Sea Witch. He proposes to do so in a highly metropolitan environment in an effort to inspire and kindle the imagination of a nation; to do so with a large cadre of apprentices under the training of three master shipwrights, one master blacksmith and ten carpenters;路 to sail her round the earth with paying passengers and cargo and at all stages to honor the bottom line. That is, he intends that Sea Witch be undertaken as a paying proposition while planning to throw all profits into the future training of youth at sea and on the seaboard. Smith notes : "Ships of the magnitud e were fashioned from wood, plant fiber, wrought iron, skill and s.weat. Ingredients that are scarce today . . . Shouldn't we reclaim the heritage of skills that. made our nation so great? The ability to do so is slipping beyond our reach. We must move now ... "

Pete Seeger, through sailing the Hudson River sloop Clearwater, has afforded enormous breadth of vision to innumerable people as he has raw and. inspiring experience-at very nominal cost. The campaigning of the brig Unicorn, while at high cost, is a bold and live process conducted to reclaim or revitalize adjudicated juvenile delinquents. Here seamanship and thus treasure, time and talent are serving to restore kids rather than artifacts. The present building of a 36-foot Tancook Whaler in Bath , Maine, which will simultaneou sly carry cargo and conduct sail training in a "labor for learning" trade-off, is another example of live

rather than static ends to which we might put the healing funds now sprung from the federal government. The building and operating plans of the John F. Leavitt in Thomaston, Maine has involved many young boatwrights as well as accomplished journeymen under the remarkable hand of Roy Wallace and the bold risk-taking and long range thought and action of Ned Ackerman. A 90-foot wooden schooner of her tonnage, designed for trade is on a par with the most responsible moves being made to underwrite the future in energy conservation as well as skills preservation . The above five examples are far from monuments to our past; they are present-day and future oriented. But they honor on every level the greatness of that past-all of the skills of our heritage, from tacking a square rigger to blacksmithing and from using the river's current to harnessing wind to transport bottom-line freight. These are the essentials in our maritime inheritance . The old路路 monuments are but the testimony that there once existed competence . To ignore the need for continuity and the will to attain competence of the young today because of the attractions of building massive static tributes to our past is to bring down upon us the same judgement that befell Ozymandias: " Look on my work s, ye Mi ghty , a nd des pair! " Nothin g beside remains. Round the decay of that colossa l wreck , boundless and bare the lone a nd level sand s stretch far awa y.

Mr. Lee is founder and director of the Apprenticeshop al the Maine Maritime Museum, at Bath, where the learning of Maine boatbuilders is kept alive, as young people build traditional craft by traditional methods. Further information is available from The Apprenticeshop, 375 Front Street, Bath, Maine 04530.