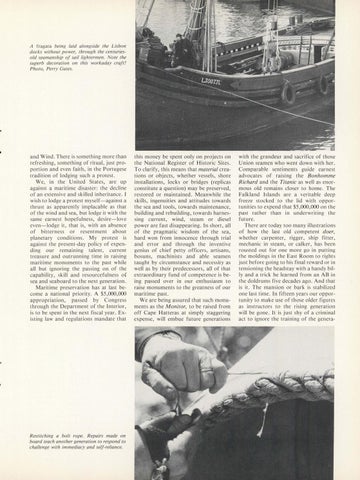 A fragata being laid alongside the Lisbon docks without power, through the cenluriesold seamanship of sail lightermen. No re the superb decoration on this workaday craft! Photo, Perry Gates.

and Wind. There is so methin g mo re than refreshing, so mething of ritual, just proport ion and eve n faith, in th e Porlugese tradition of lodging such a protest. We, in the United Stales, are up against a marit ime disaster: th e decl ine of an extensive a nd skill ed inh eritance. I wis h to lodge a protest m yse lf-against a thrust as apparently implacab le as that of the wind a nd sea, but lodge it with the same earnest hope fulne ss, desire-love even -lodge it , that is, with an absence of bitt erness or resentment about planetary co nditions. My protest is against th e present-day policy of expending o ur remainin g tal ent, current treasure and outrunning tim e in raising maritime monuments to th e past while a ll but ignorin g the passing on of the capability, sk ill and reso urcefulness of sea and sea board to the next ge neration. Maritime preservation has a t last beco me a nation a l priorit y. A $5,000,000 appropriation, passed by Congress through the Department of the Interior, is to be spe nt in the next fiscal year. Existing law and regu latio ns mandate that

Restitching a bolt rope. Repairs made on board teach another generation to respond to challenge with immediacy and self-reliance.

thi s money be spent only on project s on the National Regi ster of Historic Sites. To clarify, this means that material creations or objects, whether vessels, shore installations, lock s or bridges (replicas constitute a question) may be preserved, restored or maintained . Meanwhile th e sk ills, ingenuities and attitudes towa rds th e sea and tools, towards ma intenance , building and rebuildin g, towa rd s ha rn essing current, wind, steam or diesel power are fast di sa ppearing. In short, a ll of the pragmatic wisdom of the sea, hard won from innocence through trial and error and throu gh the in ve nti ve genius of chief petty officers, artisans, bosuns, machinists and able sea men taught by circumstance and necessity as well as by their predecesso rs, a ll of th a t extraordinary fund of competence is being passed over in our enthusiasm lo raise monument s lo the greatn ess of our maritime past. We are being assured that such monuments as the Monito1~ to be rai sed from off Cape Hatteras a t simply stagge rin g expense, will embue future ge nerations

with th e gra ndeur and sacrifi ce of those Union seamen who went down with her. Comparable se ntiments guide earnest advocates of raising the Bonhomme Richard and the Titanic as well a s enormous old remain s closer to home. The Falkland Islands are a veritable deep fr eeze stocked to the lid with opportunities to expend that $5,000,000 on the past rather than in underwritin g the future. There a re toda y too many illustration s of how the last o ld competent doer, whether ca rpenter, rigger, ship fitter, mec hanic in steam, or calk er, has been rousted out for one more go in puttin g th e moldin gs in th e East Room to ri ght s ju st before go in g lo his final rewa rd or in tensioning the headstay with a handy billy and a trick he learned from an AB in th e doldrums five decades ago. And that is it. The mansion or bark is sta bili zed one last time. In fifteen years our opportunity to make use of tho se older fi gures as instructors lo the rising ge neration will be gone . I! is just shy of a criminal act to ignore the training of the ge nera-