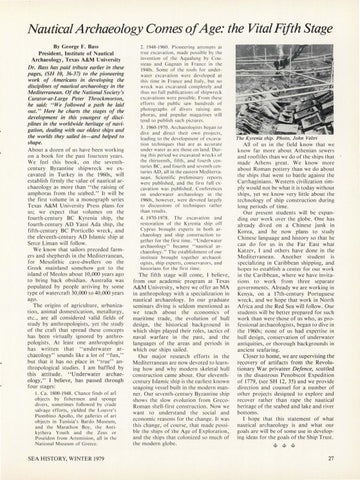 Dr. Bass has paid tribute earlier in these pages, (SH 10, 36-37) to the pioneering work of Americans in developing the disciplines of nautical archaeology in the Mediterranean. Of the National Society's Curator-at-Large Peter Throckmorton, he said: "We followed a path he laid out." Here he charts the stages of the development in this youngest of disciplines in the worldwide heritage of navigation, dealing with our oldest ships and the worlds they sailed in-and helped to shape. About a dozen of us have been working on a book for the past fourteen years. We feel this book, on the sevent hcent ury Byzantine shi pwreck we excavated in Turkey in th e 1960s, wi ll es tab lish firmly the va lue of nautical archaeology as mo re than " th e raising of amp horas from th e seabed." It will be the first vo lume in a monograph series Texas A&M University Press plans for us; we expect that volumes on th e fo urth-cen tury BC Kyrenia ship, th e fourth-century AD Yassi Ada ship, the fifth-c entury BC Porticello wreck, and the eleve nth -ce ntury AD Islamic sh ip at Serce Liman wi ll follow. We kn ow th a t sa ilors preceded farmers a nd sheph erds in the Mediterranean, for Mesolithic cave-dwellers on th e Greek mainla nd so mehow go t to th e island of Meolos about 10,000 years ago to brin g back obsidi a n . Australia was populated by people arriv ing by some type of watercraft 30,000 to 40,000 years ago. The origins of agr iculture, urb a ni zation, ani ma l d omesticat ion , metallurgy, etc., are a ll considered va lid fields of study by anthropo logists, yet the study of the craft that spread these concepts has been virtua ll y ignored by anthropologists. At least one a nthropol ogist has written that " und erwater archaeology" so und s lik e a lot of "fun," but that it has no place in "true" anthropological studi es. I am baffled by this a ttitude. "U nderwater archaeology," I believe, has passed through four stages: I. Ca . 1800- 1948. C hance fin ds of arl objects by fis hermen and sponge divers, so metimes fo ll owed by crude sa lvage efforts, yield ed the Louvre' s Pi omb in o Apoll o, th e ga ll er ies o f a rt objec ts in Tunisia's Ba rd o Museum, and the Marathon Boy, the Ant ikythera Youth and the Zeus or Poseidon from Artemision, all in the National Museum of Greece.

2. 1948-1960. Pioneering attempts at true excavation, made possible by the in vent ion of the Aqualung by Cousteau and Gagnan in France in the 1940s. Some of the too ls for underwater excavation were developed at this time in France and Ital y, but no wreck was excavated completely a nd thu s no full publ icat ion s of shipwreck excavations were possible. From these efforts the public saw hundreds of photograph s of divers rai sin g a mpho ras, and popu lar maga zi nes sti ll tend to publi sh such pi ctures. 3. 1960- 1970. Archaeo log ists began to dive and d irect their own projects, leading to the development of excavation techn iques that a re as acrnrate under wa te r as are those o n la nd. During thi s period we excava ted wrecks of the thirt eenth, fifth, and fourth ce nturies BC, and fourth and seve nth ce nturies AD, a ll in the eastern Mediterranean. Scientific preliminary reports were pub li shed, and the first full excavat ion was pub li shed. Co nfere nces on underwater arc haeo logy in the 1960s, however, were devoted large ly to discussions of techniques rat her than resu It s. 4. 1970-1978. The excavat ion anti restora tion of the Kyrenia ship off Cyprus broug ht exper ts in both a rchaeology and ship construc tion to· get her for the first time. "Underwater arc haeo logy" became "naut ical archaeology." The estab li shme nt of o ur institute brou ght together arc haeo logis ts, s hip exper ts, conserva tors, a nd hi sto rian s for th e fir st tim e.

The fifth stage will co me, I believe, fro m our academic program a t Texas A&M University, where we offer an MA in a nthropo logy with a speciali za ti o n in nautica l archaeo logy. In our gra duate se minars diving is seldom menti o ned as we teach abo ut the eco nom ics of maritime trade, the evoluti on of hull design, the historica l background in which ships played their roles, tactics of naval warfare in the past , and the languages of the areas and periods in whi ch our ships sai led. Our major research efforts in the Mediterranean are now devoted to learning how a nd why modern skeletal hull construction came about. Our eleve nthce ntury Isla mi c ship is the earli es t known seagoing vessel built in th e modern manner. Our seventh-century Byzantine sh ip shows the slow evoluti on from GrecoRoman shell-first const ru ction . Now we want to underst·a nd the socia l an d econom ic reasons for the cha nge. It was this cha nge, of course, that made possible the shi ps of the Age of Exploration, and the sh ips that co lonized so much of the modern globe.

Th e Kyrenia ship. Photo, John Veltri A ll of us in th e fie ld know that we know far more a bout Athenian se wers and rooftil es than we do of the ships th a t made Athens grea t. W e know more abo ut Ro man pott e ry than we do abou t th e ships that wen t to battle aga inst the Cart haginian s. Western civili za tion simply wou ld not be what it is toda y without ships, yet we know very little about th e technology of ship co nstruction durin g long periods of time. Our present stud ents will be expa nd ing o ur work over th e globe. One has already dived on a C hin ese junk in Korea, a nd he now plans to stud y C hin ese la nguage a nd history so th a t he can do for us in th e Far East what Katzev, I a nd others have done in th e Mediterranean. Another student is spec ia li zing in Ca ribbean shippin g, a nd hopes to estab li sh a center for o ur work in th e Ca ribbean , where we have in vitations to work from three se parate gove rnments. Already we are working in Kenya, on a I 7th-century Portuguese wreck, and we hope that work in North Africa an d the Red Sea will follow. Our stud ent s wi ll be better prepared for such work th a n were those of us who, as professional archaeo logists, began to dive in th e 1960s; none of us had expert ise in hull design, co nse rvation of u·nd erwa ter antiquities, or thorou gh background s in a ncient sea faring. Closer to home, we a re supervising the recovery of artifacts from the Revolutionary War privateer Defence, scuttled in the disastrous Penobsco t Expedi ti o n of 1779, (see SH 12, 35) a nd we provide direction a nd counsel for a number of ot her projects designed to exp lore and recover rather than rape th e na uti cal heritage of the sea bed a nd lake and river bottoms. I ho pe that thi s sta tement of what na utical archaeo logy is and what our goals are will be of so me use in developing ideas for the goals of the Ship Trust.