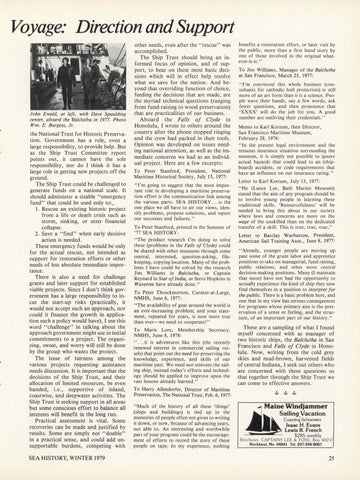 the National Trust for Historic Preservation. Government has a role, even a large responsibility, to provide help. But as the Ship Trust Committee report points out, it cannot have the sole responsibility, nor do I think it has a large role in getting new projects off the ground. The Ship Trust could be challenged to generate funds on a national scale. It should administer a sizable "emergency fund" that could be used only to:_ I. Rescue an existing historic project from a life or death crisis such as storm, sinking, or utter financial collapse. 2. Save a "find" when early decisive action is needed. These emergency funds would be only for the actual rescue, not intended as support for restoration efforts or other needs of less absolute immediate importance. There is also a need for challenge grants and later support for established viable projects. Since I don't think government has a large responsibility to incur the start-up risks (practically, it would not accept such an approach, nor could it finance the growth in application such a policy would have), I use this word "challenge" in talking about the approach government might use in initial commitments to a project. The organizing, sweat, and worry will still be done by the group who wants the proiect. The issue of fairness among the various projects requesting assistance needs discussion . It is important that the decisions of the Ship Trust, and their allocation of limited resources, be even handed, i.e., supportive of inland, coastwise, and deepwater activities. The Ship Trust is seeking support in all areas but some conscious effort to balance all interests will benefit in the long run. Practical assessment is vital. Some recoveries can be made and justified by results. Some are simply not "doable" in a practical sense, and could add unsupportable burdens, competing with SEA HISTORY, WINTER 1979

other needs, even after the "rescue" was accomplished. The Ship Trust should bring an informed focus of opinion, and of support, to bear on these most basic decisions which will in effect help resolve what we save for the nation. And beyond that overriding function of choice, feeding the decisions that are made, are the myriad technical questions (ranging from fund-raising to wood preservation) that are practicalities of our business. Aboard the Falls of Clyde in Honolulu, I wrote to others around the country after the phone stopped ringing and the crew had packed in their tools. Opinion was developed on issues needing national attention, as well as the immediate concerns we had as an individual project. Here are a few excerpts: To Peter Stanford, President, National Maritime Historical Society, July 13, 1977: "I ' m going to suggest that the most important role in developing a maritime preservation effort is the communication link among the. various parts. SEA HISTORY ... is the one place we a ll have to air our views, identify problems, propose solutions, and report our successes and failures." To Peter Stanford, printed in the Summer of '77 SEA HISTORY: "The product research I'm doing to solve these (problems in the Falls of Clyde) could be shared with other museums through some central, interested, question-asking, filekeeping, copying location . Many of the problems I have could be solved by the research Jim Williams in Balclutha, or Captain Reynard in Star of India, or Steve Hopkins in Wavetree have already done." To Peter Throckmorton, Curator-at-Large, NMHS, June 6, 1977: "The availability of gear around the world is an ever-increasing problem; and your statement, repeated for years, is now more true than ever-we need to cooperate!" To Marie Lore, Membership Secretary, NMHS, June 8, 1978: " ... it is adventures like this (the recently renewed interest in commercial sailing vessels) that point out the need for preserving the knowledge, experience, and skills of our maritime past. We need not reinvent the sailing ship, instead today's efforts and technol'ogy shou ld be applied to improve upon the vast lessons already learned."

benefits a restoration effort, or later visit by the public, more than a first hand story by one of those involved in the original whatever-it-is." To Jim Williams, Manager of the Balclutha at San Francisco, March 23, 1977: "I'm convinced this whole business (consultants for cathodic hull protection) is still more of an art form than it is a science. People wave their hands, say a few words, ask fewer questions, and then pronounce that 'XXXX' will do the job for you. A good number are outliving their credentials." Memo to Karl Kortum, then Director, San Francisco Maritime Museum, February 28, 1976: "In the present legal environment and the tenuous insurance situation surrounding the museum, it is simply not possible to ignore actual hazards that cou ld lead to an (shipboard) accident, or code requirements that haveÂˇ an influence on our insurance rating ." Letter to Karl Kortum, July 13, 1977: "He (Lance Lee, Bath Marine Museum) stated that the aim of any program should be to involve young people in learning these traditional ski ll s. 'Resourcefulness' will be needed to bring this about in our society where laws and concerns are more on the wage of the unskilled than on the dedicated transfer of a skill. This is true, true, true," Letter to Barclay Warburton, President, American Sail Training Assn., June 8, 1977: "Already, younger people are moving up past some of the grunt labor and apprentice positions to take on managerial, fund raising, public relations, and other more central decision-making positions. Many (I maintain that most) have not had the opportunity to actually experience the kind of ship they now find themselves in a position to interpret for the public. There is a basic problem here, and one that in my view has serious consequences for programs whose primary aim is the preservation of a sense or feeling, and the structure, of an important part of our history."

These are a sampling of what I found myself concerned with as manager of two historic ships, the Balclutha in San Francisco and Falls of Clyde in Honolulu. Now, writing from the cold grey skies and mud-brown, harvested fields of central Indiana, I seek out others who are concerned with these questions so that together through the Ship Trust we can come to effective answers.

To Harry Allendorfer, Director of Maritime Preservation, The National Trust, Feb. 6, 1977: "Much of the history of all these 'things' (ships and buildings) is tied up in the memories of people often not given to writing it down, or now, because of advancing years, not able to. An interesting and worthwhile part of your program could be the encouragement of efforts to record the story of these people on tape. In my experience, nothing