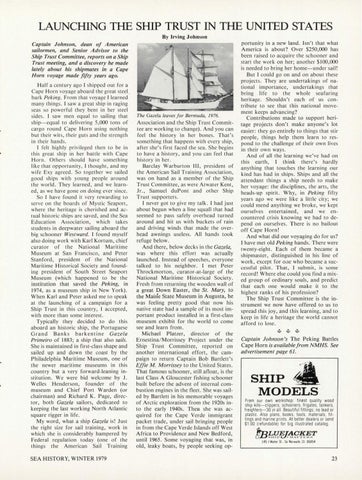 LAUNCHING THE SHIP TRUST IN THE UNITED STATES By Irving Johnson

Captain Johnson, dean of American sailormen, and Senior Advisor to the Ship Trust Committee, reports on a Ship Trust meeting, and a discovery he made lately about his shipmates in a Cape Horn voyage made fifty years ago. Half a century ago I shipped out for a Cape Horn voyage aboard th e great steel bark Peking. From that voyage I learned man y thin gs . I saw a great ship in raging seas so powerful they bent in her steel sides. I saw men equal to sailing th a t ship-equal to deliverin g 5,000 tons of cargo round Cape Horn using nothing but their wits, their guts and the st ren gt h in their hands. I felt hi ghly privileged then lo be in this great ship in her battle with Cape Horn. Others should have somethin g like that opportunity, I thou ght , and my wife Exy agreed. So toge ther we sailed good ships with young people around the world. They learned, and we learned, as we have go ne on doin g ever since. So I ha ve found it very rewarding to serve on the boards of Mystic Seaport, where the heritage is cherished and actual historic ships are saved, and the Sea Education Association , which takes students in deepwater sailing aboard the big schooner Westward. I found myself also doing work with Karl Kortum, chief curator of the National Maritime Museum at San Francisco, and Peter Stanford, president of the Nationa l Maritime Historical Society and founding president of South Street Seaport Museum (which happened to be the institution that saved the Peking, in 1974, as a muse um ship in New York) . When Karl and Peter asked me to speak at the launching of a campaign for a Ship Trust in this country, I accepted, with more than some interest. Typically they decided to do this aboard an historic ship, the Portuguese Grand Bank s barkentine Gaze/a Primeiro of 1883; a ship that also sails. She is maintained in first-class shape and sailed up and down the coast by the Philadelphia Maritime Museum, one of the newer maritime museums in this country but a very forward-leanin g institution. We were bid welcome by J . Welles Henderson, founder of the museum and Chief Port Warden (or chairman) and Richard K. Page, director, both Gaze/a sailors, dedicated to keepin g the last working North Atlantic square ri gger in life . My word, what a ship Gaze/a is! Just the right size for sail training, work in which she is considerably hampered by Federal regulation today (one of the thin gs the American Sail Training SEA HISTORY, WINTER 1979

The Gazela leaves for Bermuda, 1976. Association and the Ship Tru st Committee are working to chan ge). And you can feel the history in her bones. That&#39;s something that happens with every ship, after she&#39;s first faced the sea. She begin s to have a history , and you can feel that history in her . Barclay Warburton Ill , president of the American Sail Training Association, was on hand as a member of the Ship Trust Committee, as were Atwater Kent, Jr., Samuel duPont and other Ship Trust supporters. I never got to give my talk . 1 had just about begun when a line squall that had seemed to pass sa fely overhead turned around and hit us with buckets of rain and driving winds that made the overhead awnings useless . All hands took refuge below. And there, below decks in the Gaze/a, was where this effort was actually launched. Instead of speeches, everyone talked to his neighbor. I met Peter Throckmorton , curator-at-large of the National Maritime Historical Society. Fresh from returnin g the wooden wall of a great Down Easter, the St. Mary, to the Mairie State Museum in Augusta, he was feeling pretty good that now his native state had a sample of its most important product installed in a first-c lass museum exhibit for the world to come see and learn from. Michael Platzer, director of the Ernestina/ Morrissey Project under the Ship Trust Committee, reported on another international effort, the campaign to return Captain Bob Bartlett&#39;s Effie M. Morrissey to the United States. That famous schooner, still afloat, is the last Class A Gloucester fi shing schooner built before the advent of internal combustion engines in the fleet. She was sailed by Bartlett in his memorable voyages of Arel ic exploration from the 1920s into the early 1940s. Theri she was acquired for the Cape Verde immigrant packet trade, under sail bringing people in from the Cape Verde Islands off West Africa to Providence and New Bedford, until 1965 . Some voyaging that was, in old, leaky boats, by peo ple seeking op-

portunity in a new land . Isn &#39; t that what America is about? Over $250,000 has bee n raised to acquire the schooner a nd start the work on her; another $ 100,000 is needed to bring her home-under sail! But I cou ld go on and on about these projects. Th ey are undertakings of national importance, undertakings that bring life to the whole seafarin g heritage. Shouldn&#39;t each of us contribute to see that this national movement kee ps advancing? Contributions made to support heritage projects don &#39; t make anyone&#39;s lot easier: they go entirely to things that stir people, things help them learn to respond to the challenge of their own lives in their own ways. And of all the learning we&#39;ve had on this earth, I think there&#39;s hardly anything that touches the learning our kind has had in ships. Ships and all th e attendant things a ship needs to make her voyage: the disciplines, the arts, the heads- up spirit. Why, in Peking fifty years ago we were like a little city; we could mend anything we broke, we kept ourselves entertained, and we e ncountered crisis know ing we had to depend on ourselves . There is no bailout off Cape Horn! And wha t did our voyaging do for us? I have met old Peking hands. There were twenty-eight. Each of them became a shipmaster, distinguished in his line of work, except for oae who became a successful pilot. That, I submit, is some record! Where else could you find a mixed group of ordinary souls, and predict that each one would make it to the highest ranks of his profession? The Ship Trust Committee is the instrument we now have offered to us to spread this joy, a nd this learning, and to keep in life a heritage the world cannot afford to lose.