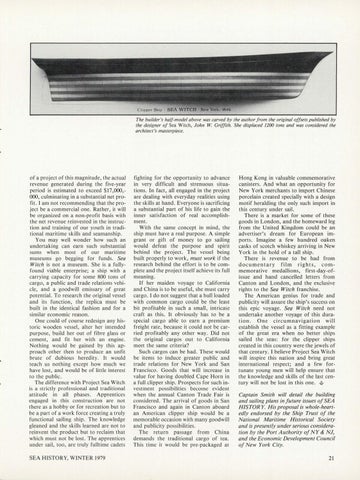 The builder's half-model above was carved by the author from the original offsets published by the designer of Sea Witch, John W. Griffith. She displaced 1200 tons and was considered the architect's masterpiece.

of a project of this magnitude, the actual revenue generated during the five-year period is estimated to exceed $17,000,000, culminating in a substantial net profit. I am not recommending that the project be a commercial one. Rather, it will be organized on a non-profit basis with the net revenue reinvested in the instruction and training of our youth in traditional maritime skills and seamanship . You may well wonder how such an undertaking can earn such substantial sums when most of our maritime museums go begging for funds. Sea Witch is not a museum. She is a fullyfound viable enterprise; a ship with a carrying capacity for some 800 tons of cargo, a public and trade relations vehicle, and a goodwill emissary of great potential. To research the original vessel and its function, the replica must be built in the identical fashion and for a similar economic reason. One could of course redesign any historic wooden vessel, alter her intended purpose, build her out of fibre glass or cement, and fit her with an engine. Nothing would be gained by this approach other then to produce an unfit brute of dubious heredity. It would teach us nothing except how much we have lost, and would be of little interest to the public. The difference with Project Sea Witch is a strictly professional and traditional attitude in all phases. Apprentices engaged in this construction are not there as a hobby or for recreation but to be a part of a work force creating a truly functional sailing ship. The knowledge gleaned and the skills learned are not to reinvent the product but to reclaim that which must not be lost. The apprentices under sail, too, are truly fulltime cadets SEA HISTORY, WINTER 1979

fighting for the opportunity to advance in very difficult and strenuous situations. In fact, all engaged in the project are dealing with everyday realities using the skills at hand. Everyone is sacrificing a substantial part of his life to gain the inner satisfaction of real accomplishment. With the same concept in mind, the ship must have a real purpose. A simple grant or gift of money to go sailing would defeat the purpose and spirit behind the project. The vessel being built properly to work, must work if the research behind the effort is to be complete and the project itself achieve its full meaning. If her maiden voyage to California and China is to be useful, she must carry cargo. I do not suggest that a hull loaded with common cargo could be the least bit profitable in such a small, intricate craft as this. It obviously has to be a special cargo able to earn a premium freight rate, because it could not be carried profitably any other way . Did not the original cargos out to California meet the same criteria? Such cargos can be had. These would be items to induce greater public and trade relations for New York and San Francisco. Goods that will increase in value for having doubled Cape Horn in a full clipper ship. Prospects for such investment possibilities become evident when the annual Canton Trade Fair is considered. The arrival of goods in San Francisco and again in Canton aboard an American clipper ship would be a memorable occasion with many goodwill and publicity possibilities. The return passage from China demands the traditional cargo Âˇ of tea. This time it would be pre-packaged at

Hong Kong in valuable commemorative canisters. And what an opportunity for New York merchants to import Chinese porcelain created specially with a design motif heralding the only such import in this century under sail. There is a market for some of these goods in London, and the homeward leg from the United Kingdom could be an advertiser's dream for European imports. Imagine a few hundred oaken casks of scotch whiskey arriving in New York in the hold of a tall ship. There is revenue to be had from documentary film rights, commemorative medallions, first-day-ofissue and hand cancelled letters from Canton and London, and the exclusive rights to the Sea Witch franchise. The American genius for trade and publicity will assure the ship's success on this epic voyage. Sea Witch need not undertake another voyage of this duration. One circumnavigation will establish the vessel as a fitting example of the Âˇgreat era when iio better ships sailed the seas: for the clipper ships created in this country were the jewels of that century. I believe Project Sea Witch will inspire this nation and bring great international respect; and a few fortunate young men will help ensure that the knowledge and skills of the last century will not be lost in this one. .t

Captain Smith will detail the building and sailing plans in future issues of SEA HISTORY. His proposal is whole-heartedly endorsed by the Ship Trust of the National Maritime Historical Society and is presently under serious consideration by the Port Authority of NY & NJ, and the Economic Development Council of New York City. 21