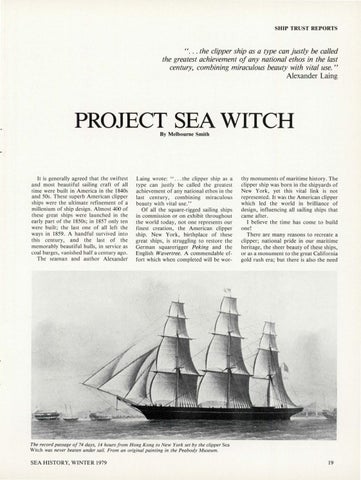 " ... the clipper ship as a type can justly be called the greatest achievement of any national ethos in the last century, combining miraculous beauty with vital use. " Alexander Laing

It is generally agreed that the swiftest and most beautiful sailing craft of all time were built in America in the 1840s and 50s. These superb American clipper ships were the ultimate refinement of a millenium of ship design. Almost 400 of these great ships were launched in the early part of the 1850s; in 1857 only ten were built; the last one of all left the ways in 1859. A handful survived into this century, and the last of the memorably beautiful hulls, in service as coal barges, vanished half a century ago. The seaman and author Alexander

Laing wrote: " ... the clipper ship as a type can justly be called the greatest achievement of any national ethos in the last century, combining miraculous beauty with vital use." Of all the square-rigged sailing ships in commission or on exhibit throughout the world today, not one represents our finest creation, the American clipper ship. New York, birthplace of these great ships, is struggling to restore the German squarerigger Peking and the English Wavertree. A commendable effort which when completed will be wor-

thy monuments of maritime history. The clipper ship was born in the shipyards of New York, yet this vital link is not represented. It was the American clipper which led the world in brilliance of design, influencing all sailing ships that came after. I believe the time has come to build one! There are many reasons to recreate a clipper; national pride in our maritime heritage, the sheer beauty of these ships, or as a monument to the great California gold rush era; but there is also the need

The record passage of 74 days, 14 hours from Hong Kong to New York set by the clipper Sea Witch was never beaten under sail. From an original painting in the Peabody Museum.