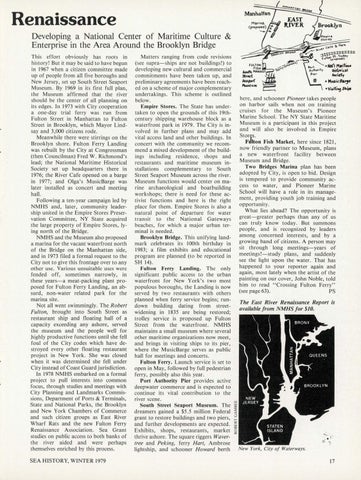 Renaissance Developing a National Center of Maritime Culture & Enterprise in the Area Around the Brooklyn Bridge This effort obviously has roots in history! But it may be said to have begun in 1967 when a citizen committee made up of people from all five boroughs and New Jersey, set up South Street Seaport Museum. By 1969 in its first full plan, the Museum affirmed that the river should be the center of all planning on its edges. In 1973 with City cooperation a one-day trial ferry was run from Fulton Street in Manhattan to Fulton Street in Brooklyn, which Mayor Lindsay and 3,000 citizens rode. Meanwhile there were stirrings on the Brooklyn shore. Fulton Ferry Landing was rebuilt by the City at Congressman (then Councilman) Fred W. Richmond's lead; the National Maritime Historical Society set up headquarters there in 1976; the River Cafe opened on a barge in 1977; and Olga's MusicBarge was later installed as concert and meeting hall. Following a ten-year campaign led by NMHS and, later, community leadership united in the Empire Stores Preservation Committee, NY State acquired the large property of Empire Stores, lying north of the Bridge. NMHS and the Museum also proposed a marina for the vacant waterfront north of the Bridge on the Manhattan side, and in 1973 filed a formal request to the City not to give this frontage over to any other use. Various unsuitable uses were fended off, sometimes narrowly, in these years-a meat-packing plant proposed for Fulton Ferry Landing, an absurd, non-water related park for the marina site. Not all went swimmingly. The Robert Fulton, brought into South Street as restaurant ship and floating hall of a capacity exceeding any ashore, served the museum and the people well for highly productive functions until she fell foul of the City codes which have destroyed every other floating restaurant project in New York. She was closed when it was determined she fell under City instead of Coast Guard jurisdiction. In 1978 NMHS embarked on a formal project to pull interests into common focus, through studies and meetings with City Planning and Landmarks Commissions, Department of Ports & Terminals, State and National Parks, the Brooklyn and New York Chambers of Commerce and such citizen groups as East River Wharf Rats and the new Fulton Ferry Renaissance Association. Sea Grant studies on public access to both banks of the river aided and were perhaps themselves enriched by this process. SEA HISTORY, WINTER 1979

Matters ranging from code revisions (see supra-ships are not buildings!) to FULTON FISH developing new cultural and commercial ""'"' HAkKU commitments have been taken up, and ~ ~ preliminary agreements have been reachMi&K""' ~ ed on a scheme of major complementary undertakings. This scheme is outlined here, and schooner Pioneer takes people below. on harbor sails when not on training Empire Stores. The State has undercruises for the Museum's Pioneer taken to open the grounds of this I 9thMarine School. The NY State Maritime century shipping warehouse block as a Museum is a participant in this project waierfront park in 1979. The City is inand will also be involved in Empire volved in further plans and may add Storts. vital access land and other buildings. In Fdlton Fish Market, here since 1821, concert with the community we recomnow friendly partner to Museum, plans mend a mixed development of the builda new waterfront facility between ings including residence, shops and Museum and Bridge. restaurants and maritime museum inTwo Bridges Marina plan has been stallations complementary to South adopted by City, is open to bid. Design Street Seaport Museum across the river. is tempered to provide community acMuseum functions would center on macess to water, and Pioneer Marine rine archaeological and boatbuilding School will have a role in its manageworkshops; there is need for these acment, providing youth job training and tivist functions and here is the right opportunity. place for them. Empire Stores is also a What lies ahead? The opportunity is natural point of departure for water great-greater perhaps than any of us transit to the National Gateways can truly know today. But summons beaches, for which a major urban terpeople, and is recognized by leaders minal is needed. among concerned interests, and by a Brooklyn Bridge. This unifying landgrowing band of citizens. A person may mark celebrates its IOOth birthday in sit through Âˇ long meetings-years of 1983; a film exhibits and educational meetings!-study plans, and suddenly program are planned (to be reported in see the light upon the water. That has SH 14). happened to your reporter again and Fulton Ferry Landing. The only again, most lately when the artist of the significant public access to the urban painting on our cover, John Noble, told waterfront for New York's two most to read "Crossing Fulton Ferry" him populous boroughs, the Landing is now (see page 63). PS served by two restaurants with others planned when ferry service begins; runThe East River Renaissance Report is down building dating from streetavailable from NMHS for $10. widening in 1835 are being restored; trolley service is proposed up Fulton Street from the waterfront. NMHS maintains a small museum where several other maritime organizations now meet, and brings in visiting ships to its pier, where the MusicBarge serves as public hall for meetings and concerts. Fulton Ferry. Launch service is set to open in May, followed by full pedestrian ferry, possibly also this year. Port Authority Pier provides active deepwater commerce and is expected to continue its vital contribution to the river scene. UJ South Street Seaport Museum. The ~ dreamers gained a $5.5 million Federal ~ grant to restore buildings and two piers, ~ and further developments are expected. ::i Exhibits, shops, restaurants, market ~ thrive ashore. The square riggers Waver- "' tree and Peking, ferry Hart, Ambrose New York, City of Waterways. lightship, and schooner Howard berth 17