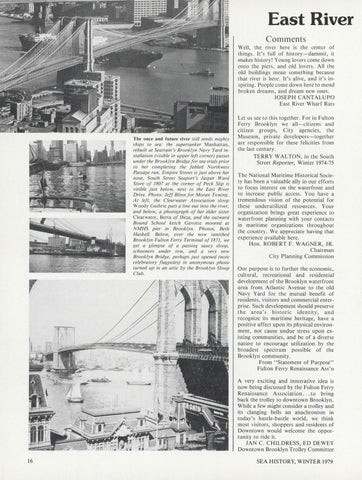 East River Comments Well, the river here is the center of things. It&#39;s full of history~dammit, it makes history! Young lovers come down onto the piers, and old lovers. All the old buildings mean something because that river is here. It&#39;s alive, and it&#39;s inspiring. People come down here to mend broken dreams, and dream new ones. JOSEPH CANTALUPO East River Wharf Rats

The once and future river still sends mighty ships to sea: the superlanker Manhattan, rebuill al Sea/rain&#39;s Brooklyn Navy Yard inslallation (visible in upper lefl cornet) passes under !he Brooklyn Bridge for sea !rials prior lo her compleling !he fabled Norlhwest Passage run. Empire Stores is just above her nose, South Streel Seaport&#39;s Jasper Ward Store of 1807 al !he corner of Peck Slip is visible )us/ below, nexl 10 the Eas/ River Drive. Photo: Jeff Blinn for Moran Towing. At lefl, the Clearwa/er Association sloop Woody Guthrie puts a line out into the river, and below, a pholograph of her elder sis/er Clearwater, Berta of Ibiza, and the ou/ward Bound School kelch Gavotte moored at NMHS pier in Brooklyn. Photos, Belh Haskell. Below, over the now vanished Brooklyn Fulton Ferry Terminal of 1871, we gel a glimpse of a passing saucy sloop, schooners under tow, and a very new Brooklyn Bridge, perhaps )us/ opened (nole celebratory flagpoles) in anonymous pholo turned up in an attic by the Brooklyn Sloop Club.

Let us see to this together. For in Fulton Ferry Brooklyn we all-citizens and citizen groups, City agencies, the Museum, private developers-together are responsible for these felicities from the last century. TERRY WAL TON, in the South Street Reporter, Winter 1974-75 The National Maritime Historical Society has been a valuable ally in our efforts to focus interest on the waterfront and to increase public access. You have a tremendous vision of the potential for these underutilized resources. Your organization brings great experience to waterfront planning with your contacts in maritime organizations throughout the country. We appreciate having that experience available here. Hon. ROBERT F. WAGNER, JR. Chairman City Planning Commission Our purpose is to further the economic, cultural, recreational and residential development of the Brooklyn waterfront area from Atlantic Avenue to the old Navy Yard for the mutual benefit of residents, visitors and commercial enterprise. Such development should preserve the area&#39;s historic identity, and recognize its maritime heritage, have a positive affect upon its physical environment, not cause undue stress upon existing communities, and be of a diverse nature to encourage utilization by the broadest spectrum possible of the Brooklyn community. From &quot;Statement of Purpose&quot; Fulton Ferry Renaissance Ass&#39;n A very Âˇexciting and innoyative idea is now being discussed by the Fulton Ferry Renaissance Association ... to bring back the trolley to downtown Brooklyn. While a few might consider a trolley and its clanging bells an anachronism in today&#39;s hustle-bustle world, we think most visitors, shoppers and residents of Downtown would welcome the opportunity to ride it. JAN C. CHILDRESS, ED DEWEY Downtown Brooklyn Trolley Committee